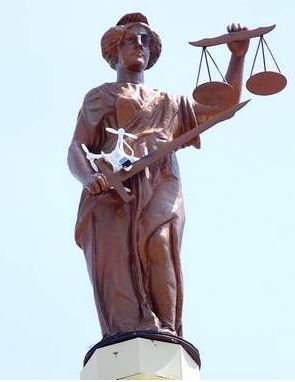 Officials in Marion, Ohio, aren’t quite sure how to get a drone that got stuck in a 100-foot high statue … Here’s the latest from the Marion Star: Lady Justice, which overlooks downtown atop the county courthouse, received an accidental upgrade to her equipment over the weekend.

In addition to the scales of justice and a double-edged sword, a seven-pound, nine-inch remote-control helicopter rests in the arms of the statue.

Terry Cline, an independent visual communications producer, director and writer, said a camera-equipped drone was lost while he was taking pictures of the Marion County Courthouse for a surprise project for the Marion CAN DO! program and the Marion Area Convention & Visitors Bureau.

Cline said the drone caught an unexpected breeze and he lost control. The helicopter “copped a feel of Lady Justice’s right breast” before coming to rest on the hilt of her sword, according to Cline.

Marion County’s commissioners said they had been contacted by Cline on how to retrieve the device. They are leaving it up to the sheriff’s office, the prosecutor’s office and the owner.

“They were talking about people wanting it down now, and it may sit up there for a long time because we are not spending county dollars,” said Commissioner Andy Appelfeller. “We’d certainly like to have it down, without a doubt, but I don’t think it’s the public, their obligation to get it down.” 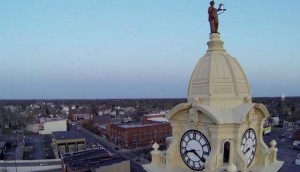 Commissioner Dan Russell said he did not know of anyone who had given Cline the authority to fly the drone and take photos.

“In a worst case scenario, now, it could fall clear off the roof and hit something.” he said.

Cline disagreed, saying the helicopter was wedged into the statue and did not pose a danger to anyone.

“He needs to check with the prosecutor and our insurance company with his plan for retrieving his helicopter before he does anything,” Commissioner Ken Stiverson said.

County Prosecutor Brent Yager said it did not appear there were any county violations. He said vandalism could be a possibility if there was damage done to the building or the statue, but that is currently undetermined.

“I don’t think he has any intent to break a law,” he said. “To me it goes to more of a civil issue than criminal intent.”

Yager did say there could be a violation with the Federal Aviation Administration.

“I don’t know if there’s some FAA violations or not,” he said. “That would be federal.”

A question and answer section from the FAA’s website explains speculations on usage for model aircraft.

“FAA guidance says that model aircraft flights should be kept below 400 feet above ground level, should be flown a sufficient distance from populated areas and full scale aircraft, and are not for business purposes,” the website detailed.

“I’m just shocked by their whole posture of this situation,” Cline said of the commissioners. “This is such a benign situation.”

The sheriff’s office investigated a complaint about a remote control helicopter stuck at the top of the Marion County Courthouse around 3:20 p.m. Monday when officer Ken Rittenour met with Cline at his home.

Cline said his conversations with the sheriff’s office led him to believe that officers were working on a solution to retrieve the drone.

“Before I could get those email images to him, they were pounding on my door,” he said. “The deputy sheriff that was here was doing a report, that was it. (They) lied to me over the phone, gave me a false sense of hope.”

Rittenour said in his report that he watched several video clips from the camera of the helicopter. Images of the courthouse, OSU Marion, the Harding Memorial, Heritage Hall and the Lincoln Park Family Aquatic Center, all part of Cline’s previous and current projects, did not raise any concerns of suspicious activity.

Cline said he is “not just somebody who thought of picking up a camera” and making films, adding that he earned a bachelor of fine arts in cinema production from The Ohio State University.

Rittenour noted that nothing in Cline’s residence raised concern. Cline had no criminal history in the officer’s background check.

Cline told officers he was taking footage of the courthouse as part of a “pro bono” piece for the economic development organizations. Cline said he had not been hired or commissioned by either group, but he was working to strengthen Marion’s image and attract tourism.

Cline felt the incident was “snowballing” and that county officials were making “a mountain out of a molehill.”

“There are a lot more important, pressing issues that need to be addressed instead of this stupid thing in the arms of justice,” he said.

Cline hopes he can get the drone back in working condition. He had spoken with fire chief Ralph Zwolle and assistant chief Rob Cowell from the Marion City Fire Department about how to retrieve the device, but no solution has been reached.

The city’s fire ladder extends to a height of 85 feet. Lady Justice sits more than 100 feet over the road.

Climbing onto the building is also risky, as the foundation of the roof is unstable.

“That dome, as I understand it, is over a wire framework,” Cline said.

His best suggestion was lowering someone from a helicopter to pluck the drone from the statue’s grasp.

“I can’t risk a guy’s life to climb up there or hang from a helicopter,” Zwolle said.

Without a solution, and with no one willing to pay for its removal, the drone may be sitting atop the courthouse for a while.

Despite being out the $1,500 flying camera, Cline said it was something he was able to laugh at.

“All things considered … this is pretty funny,” he said.