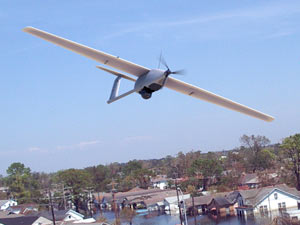 Fighter jets can refuel in the air, but what about small, electrically powered drones? LaserMotive built a system to charge drones via laser and keep them aloft indefinitely.

Tom Nugent likes to call his company’s current project a “wireless extension cord.” Not a bad analogy for LaserMotive’s laser transmitter/receiver system, which recently beamed enough energy to a 17.5-pound drone to keep it airborne at least 48 hours—about 46 hours longer than the drone can usually fly.

The aircraft was Lockheed Martin’s Stalker unmanned aerial system (UAS). In June the defense giant held a private wind-tunnel test at LaserMotive’s Seattle-area home. Although the tech is in its early stages (it’s a technology demonstration, not yet a prototype), Nugent’s comparison proved correct: “You’re plugging a system into the wall, taking that electricity and converting it to light and transmitting that light through open air to a receiver, which converts the light back into electricity,” Nugent says.

Manned fighter planes, the V-22 Osprey tilt-rotor craft, and some helicopters can refuel in flight from tankers. But that technique isn’t practiced with gas-powered drones or with those that run on electricity, which have no choice but to land to recharge their batteries. A scaled-up version of the laser charger could keep aircraft aloft indefinitely.

The laser-transmitter demonstrator consists of a 3 x 6–foot optics table holding two gallium arsenide-based diode laser arrays. The laser arrays sit in boxes about half the size of a loaf of bread and shine into a set of lenses and mirrors. The lenses and mirrors shape and merge the laser beams and focus them into a gimbaled mirror, which in turn directs them toward a receiver. 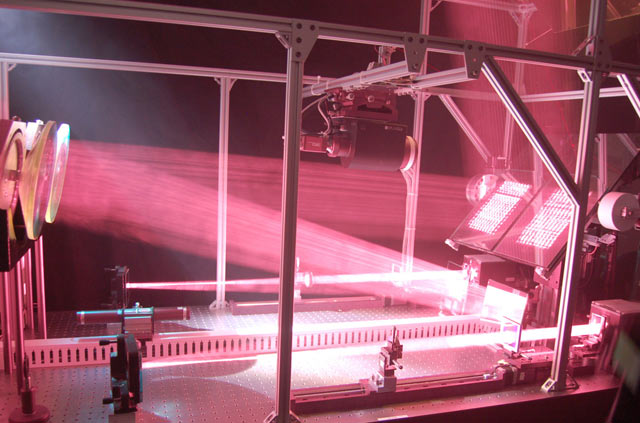 For this test, the receiver was a thin photovoltaic panel attached to the bottom of the Stalker drone’s wing. The Stalker itself was mounted at the end of small wind tunnel where it remained in simulated flight two full days, its 9.5-foot wing positioned vertically to expose the photovoltaic panel to LaserMotive’s system as it beamed power to the receiver from 30 feet away.

The laser system can transfer only about 20 to 25 percent of the electricity it takes from its ground source. But drones like the Stalker don’t require enormous amounts of energy. In the June test, its battery held more energy after the test than when it began.

Most importantly, the ability to recharge an aircraft’s batteries in-flight offers big advantages, eliminating the need to make fuel stops that lose flight time and subject the plane to added risk, says program manager Tom Koonce of Lockheed’s famous Skunk Works in Palmdale, Calif. “A ground-to-air recharging system like this allows us to provide practically unlimited flight endurance to extend and expand the mission profiles that the Stalker vehicle can fulfill.”

Nugent says the next step will be a proof-of-concept flight outdoors, though when and where hasn’t been announced. LaserMotive’s system includes computer software that uses video signals to keep the laser pointed at the receiver as the drone flies, and the company has already demonstrated that it can beam power to a receiver at least a kilometer away, which Nugent says is plenty of range to recharge a drone in flight. His company won a NASA Centennial Challenge Prize for beaming power that far in 2009. With larger optics and more expensive lasers, the system’s range could be extended to hundreds of kilometers in a straight line, but the Earth’s atmosphere would limit how far away a drone could be from its power source when flying at lower altitudes. 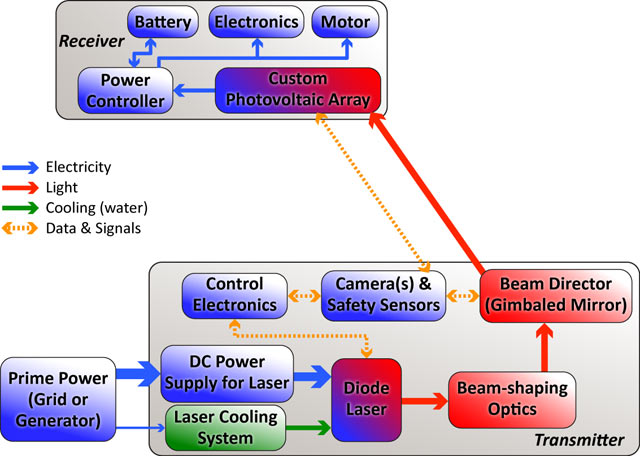 Laser power beaming is an idea that’s been around for years, but Nugent and his colleagues think its time has finally arrived, partly because of changes on the home front. The Federal Aviation Administration is in the process of loosening regulations that until recently have limited small UAV flying mainly to hobbyists. So providing a way to keep drones in the air more than a couple of hours could provide a major boost to an unmanned-aircraft market already poised to explode.

“Once people see that this capability exists, they’ll start thinking of ways to use it that we might not even consider,” Nugent said. That’s why a colleague of his suggested a new slogan: “Think outside the battery.”