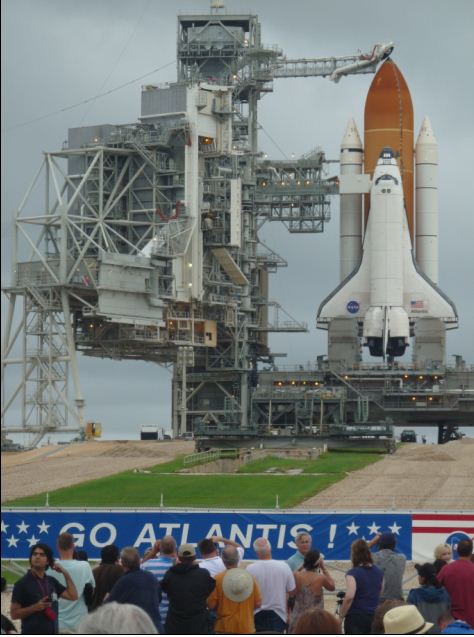 When I was young, I was swept up and inspired by the space program. I remember John Glenn’s first orbital Mercury flight (I was six years old). I grew older with Gemini and Apollo, my parents allowing me to stay home from school on most launch days. I was 13 when astronauts first walked on the moon, the 42nd anniversary of which just passed. Like many others, the space program had a huge influence on me; I flew model rockets as a boy, got a degree and worked in aerospace engineering for 20+ years, and now am a professor of rocket science at a California university.

The Space Shuttle was intended to reduce the cost of going to space. It is not your normal launch vehicle, where most components are thrown away during launch. When you fly from New York to LA, is the airplane thrown away afterwards? Of course not. Instead, the shuttle program reused most of its parts, where all but the cavernous External Tanks was recovered and refurbished. Unfortunately this did not save lots of money.

When I was in grad school, I realized I made a major mistake in not witnessing any mighty Saturn V launches. At the same time that the Space Shuttle program was having issues with main engines and thermal protection tiles, so I resolved to attend the first shuttle launch in 1981. The personal events that occurred on my trip will not be disclosed here; suffice it to say that I could have ended up in jail for several things I did! Nevertheless I was able to view the first shuttle launch as a member of the press corps.

During the subsequent 30 years, the shuttle program was used for great advances: it functioned as a “space truck” to launch many of NASA’s flagship missions such as Hubble Space Telescope, Galileo to Jupiter, and Magellan to Venus. It enabled the on-orbit repair of many crippled spacecraft, something that had never been done before. It provided transportation to and assembled and serviced the largest-ever spacecraft, the International Space Station (ISS), larger than a football field and over a million pounds in orbit, orbiting now.

I figured that since I’d seen the first launch, it was only logical to see the last. So I made reservations, contacted AirAge for a press credential, and it all came together with no adventure stories. 70% unfavorable weather was predicted during launch week.  The day before the launch, the press group was bused out to the pad in-between rain squalls, and things didn’t look good.  But it was quite nice the next day, and the launch proceeded on schedule.  I parked myself on a bleacher along with some other press.  Based on my experiences during the 1st launch 30 years earlier (I actually kept a diary!), I decided I’d simply watch the launch and let others holding cameras with HUGE lenses take the photos, so I could enjoy the experience and later look at their photos.

The Experience! We were out of sight of the countdown clock, so we didn’t know the count was holding except by hearing talking nearby.  The problem was resolved and the count resumed. At about T – 6 seconds, the main engines started and their giant steam cloud was visible to us – we all started cheering, the launch was about to happen!  At T = 0, the solid rockets ignited and the shuttle lifted off, resembling a giant yellow blowtorch ascending into the sky.  It was LARGE and DRAMATIC and UNBELIEVABLE to watch! (When one sends an email on the Internet, capital letters are discouraged because they signify “shouting.” Well, in this case shouting IS appropriate … it was AWESOME.)

So, six million pounds of rocket thrust are lifting five million pounds of rocket. Even with all this action 3.5 miles away, it was still quiet except for the sound of camera shutters, “ooh-ing,” and “ah-ing.” A few seconds after the shuttle cleared the tower, it ARRIVED — not just a sound, a strong, staccato rumbling sensation that you FEEL in your entire body, not just your ears. This visceral splendor is reason enough to attend a launch. The “rumbling” grew in intensity as the shuttle climbed, then slowly tapered off to be just a low rumbling sound as the launch continued.

About 30 seconds after liftoff, the rumbling blowtorch climbed through a layer of clouds and was no longer visible to the eye. The rumbling continued and one could see the shadow from the shuttle’s exhaust on top of the clouds!  The shadow grew and grew until the shuttle was just too far to see or hear any more.  A few congratulatory photos were taken, and then the journalists then slowly packed up their gear and headed off to write their stories.

The shuttle landed 21 July at Kennedy Space Center, concluding the final shuttle program flight, a time of “mourning” for many. Here is what the shuttle accomplished:

What’s the future?  Well, the retired shuttles are to be sent off to museums for the public to view and admire: they’ll be in Florida, New York, Virginia, and Los Angeles. The bad news: as of now, the US does not have a human space launch capability. For the near term, we’ll hire the Russians to take our astronauts to and from ISS. Several US companies are developing human-rated launchers and manned capsules/vehicles, so in a few years the picture will be different. How long will it be? There was six years between the last Apollo flight and the shuttle. Let’s hope it’s faster this time ‘round. I can’t wait for the next phase of US human spaceflight!  –Don Edberg