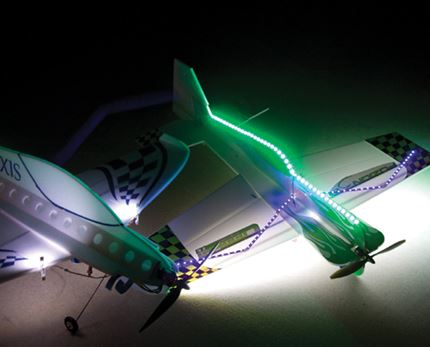 Why not customize your aircraft so that night flying will be as simple to do as flying during the day? (That is, for those of you who find it easy to fly during the day!) I decided to give night flying a try and I have outlined here how I went about installing lights on my planes.

Scale lights
Up until a few years ago, the only lights we would add were scale detail lights that match the full-size counterparts. Many of these lights are available from RAm Electronic Devices (ramrcandramtrack.com). They include flashing navigation lights, strobes, rotation beacons, and landing lights. Scale lights make it possible to fly at night but they mainly make our scale aircraft look good at early dawn and after sunset, or during the day at a scale contest. Scale lights are more of a scale detail that adds to your aircraft, rather than something that allows you to see your aircraft better at night.

LED lights
When LED lights were first introduced, they were not bright enough to use as a light source for our night-flying planes. But the new breeds of LED lights are plenty bright enough to make flying at night a breeze and they consume a low amount of power. This allows the lights to be powered by the same battery as the motor. Basically, LED lights are the choice for anyone wanting to get into nighttime flying. I am using LED lights from Common Sense RC (commonsenserc.com) and DW Foamies (dwfoamies.com).

One of the biggest issues for flying at night is plane orientation and these bright lights come in many different colors, which make plane orientating at night possible and easy to do. Installation could not be easier because of the availability of adhesive backed LED lights strips in different lengths, which can be cut for a custom fit.

Installing lights
To install the lights, the first step I took was to plan out where they would plug in; from there, I just laid out the lights so they would radiate out from that point. This center spot was where the battery connects to the speed control, which was from where I started webbing out the lights. I laid out a pattern from the tip of the wing to my starting point, cut the light strips to length and then soldered on the connectors.

Customizing my plane for night flying was a simple and straightforward project that makes it easy for anyone to add lights to their plane. I would recommend trying nighttime flying for the first time just after the sun goes down because this will give you a little more light with which to begin your journey. Another thing you can do is to fly during a full moon; you will be surprised at how much the moon can light up the flying field!

It’s also a good idea to fly in an area where the ground is very flat and there are few obstacles on the ground to run into. Even though the lights do brighten up the ground when the plane gets close, things will sneak up on you in the dark before you have time to react. Trust me on this — enjoy!