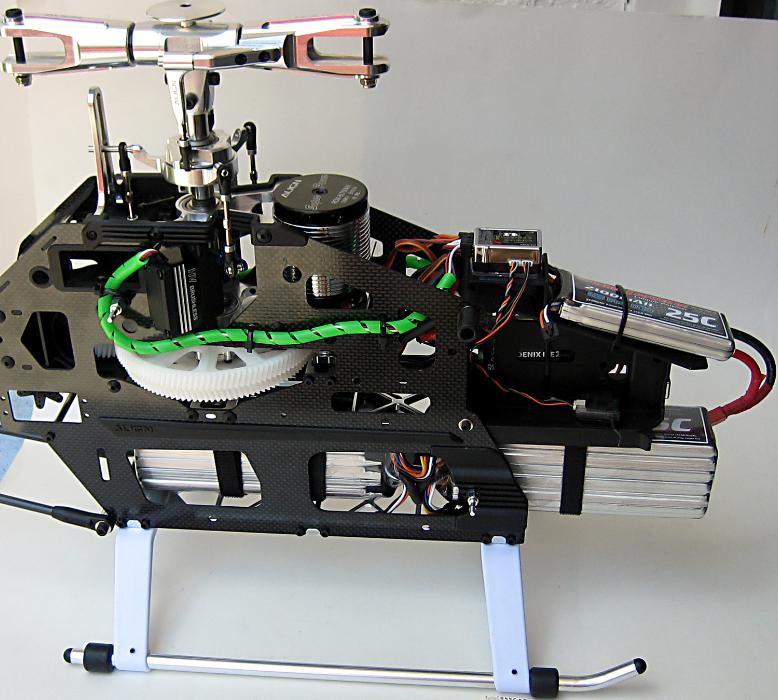 Years ago everyone was using ni-cad batteries, so choosing the right battery for you helicopter was easy. However, now with the advancements in li-po batteries, it can sometimes be difficult to know which battery is best for your application.  My TREX 700E shown here uses a 2-cell lipo for the receiver and servos, and a pair of 6 cell lipos to run the motor.  As you can see, there are a large variety of batteries available for our helicopters, and while many may suit your application your real goal is to purchase a battery pack that will;

-be within your budget
-have a long cycle life
-have the correct size and weight
-give you the longest flight times
-be able to deliver the correct voltage/amp (power)
However, choosing the right li-po for your particular application can be quite difficult since they have different ratings, sizes, plugs, wire and charge rates. Here is a simple explanation of some of the terms you should know when using these batteries.

Capacity (mAh).
This is usually the large number shown on the pack and is measured in mAh (Milliamp/hour). The capacity is the first indicator of the batteries size, and tells you how much energy it holds. The higher the number, the longer it will supply power. As an example, a 4,000mAh battery will run twice as long as a 2,000mAh battery. Although 1,000 ma = 1 amp, batteries are usually referred to in terms of milliamps vs. amps. Also, when referred to in mah (milliamp/hour) this means a 1,000mah battery should run for 1hr if drained at a constant 1,000 Milliamps (or 1 amp).

Discharge (C)
Discharge is the amount of power the battery can supply over a period of time without hurting itself. For example; A 2,000 mah battery rated at 20C can discharge at 20 x 2,000mAh = 40,000mAh or 40Amps.  Li-po batteries also have a ‘burst’ rate, which is the amount of power the battery can discharge for a short period of time, usually 10-20 seconds. A typical battery may have a rating of 20-30C, which would mean a 1,000mAh battery can discharge 20,000mAh constantly or give a 10-20 second bust of 30,000mAh (30A). When choosing a battery, it’s not only important to have the proper C rating, but a higher ‘C’ rated battery will last longer if run at a lower ‘C’ rate. As an example, a battery rated at 30C, but only run at 20C maximum, will last a lot longer than a 20C battery run at 20C each flight.