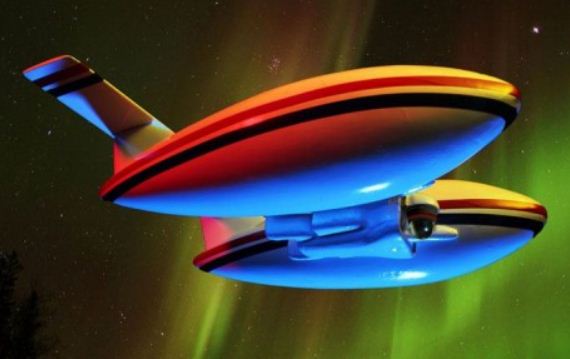 You’re on the hunt for an reclusive,  nocturnal creature that lives deep in undeveloped forest and has eluded capture (or definitive proof of its existence) throughout human history. What tool can you use to find the hairy beast? An RC airship, of course! Whether you’re a believer or not, you’ll be impressed by the ingenuity of the 43-foot-long airship “Aurora” and its payload of infrared/thermal imaging/HD video cameras, carbon-dioxide recognition equipment and even infrasound devices. (The image in this post is an artist’s rendition of Aurora.) Here’s the scoop from Gizmo’s Ben Coxworth:
“The 45-foot (13.7-meter)-long Aurora airship will be the first one of its kind, designed and built by Canadian remote-control airship company RATS (Remote Aerial Tripod Specialists) Inc. It will consist of tandem side-by-side helium-filled envelopes, joined by a gyro-stabilized carbon fiber camera platform. That catamaran-like design will help keep it from rolling from side to side, which can be a problem with traditional single-envelope airships.

It will additionally feature a proprietary propulsion system, in which air will be drawn in and vectored through four ducts. This will allow for vertical take-off and landing capabilities, hovering on the spot, and more energy-efficient operation than traditional propellor-based systems.

The Aurora will reportedly have a top air speed of 45mph (72 km/h), and will be able to remain aloft for approximately three to four hours at a time. It will be remotely-piloted from a command center in a customized motorhome, and will be switched over to autopilot once it has reached altitude. Once switched over, it will be able to autonomously perform an aerial grid search, over an area within line-of-sight of the motorhome’s mast.

Mounted on the airship will be a gyro-stabilized thermal imaging/infrared/HD video camera, which is being built specifically for the project. The aircraft will also be equipped with carbon dioxide-recognition equipment, to detect the exhalations of animals in the forests beneath it. [The team] hopes to become familiar with the CO2 signatures of common creatures such as bears, so that [it] won’t get unnecessarily excited by every reading. When something unusual shows up, however, the team will use to the camera’s powerful zoom lens to get a better look at it, while recording the images.

The ground crew will also be playing back and recording infrasound, as some people have theorized that Bigfoots use it to communicate with one another.

RATS, Inc. president Stephen Barkley said that he has hopes for the airship to be ready by early next spring (Northern Hemisphere). Once it is ready, [the team] plans on spending up to one year on the road, visiting Bigfoot-sighting hotspots in a total of 12 states.”

For the full story (including photos of Bigfoot footprints!) click over to Gizmag.