We have winners! Thanks to everyone who shared photos of their M.A.N. plans projects and to all the folks who voted for their favorite aircraft. When it came time to choose the winners from among the planes who received the most votes, we didn’t change a thing and kept the “reader’s choice” award order.

Congratulations to Tony C. and his Albatros for winning our M.A.N. Plans Photo Contest with 510 votes! Tony will receive $250 and a bag full of MAN swag for sharing his build. He notes, “It is the nicest WW I airplane in my opinion.The wood-grain fuselage makes it a one of a kind classic. It’s like a flying piece of fine furniture!” 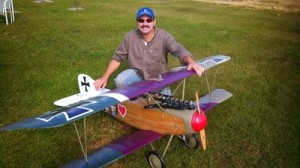 We also congratulate second place winner Michael L., who entered his Gee Bee and received 431 votes. He writes, “I fell in love with this airplane when I saw the movie the Rocketeer.  I decided from the very beginning that I wanted to build it as an electric version as opposed to the nitro original. It sports an E-flite Power 25 motor and an E-flite 50 amp esc running a 3s lipo battery. I have to say this is my favorite looking plane in my hangar.” Michael has won $150 and a bag full of MAN swag. 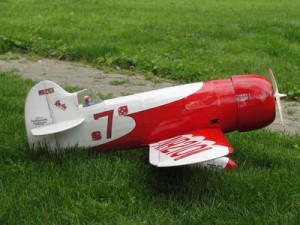 Congratulations to Eddie T. for his Waco E from plan #06891. He writes, “The plane took over a year to build and is covered with MonoKote. The cowl and wheel pants are from Fiberglass Specialties, painted with Lustrekote to match. It is powered by a Magnum 91 4-stroke glow engine with Hitec servos and a Spektrum AR8000 receiver. Maiden flight was very uneventful, she only required a few clicks of down trim. The color scheme is inspired from a full scale color scheme. She is a fantastic flyer and conversation piece at the field. The plane has been flying since the summer of 2009. At Old Timer and Open House events at AMA sanctioned flying fields the Waco draws a lot of attention.” Eddie received 201 votes and has won $5 and bag full of MAN swag. 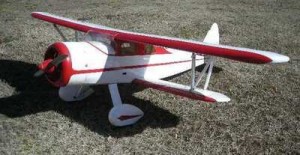