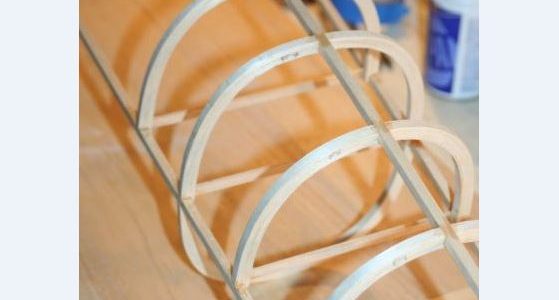 If you have been building RC warbirds for a while, you may notice that there is a terrible blight plaguing many of them… tail-heaviness!  The scourge of tail-heaviness leaves the modeler with few good options.  First, he can fly the model as-is with the CG at the limit of its aft location and stagger around the sky like a drunken sailor; a proverbial tip-stall waiting to happen.  Otherwise, he can hang a cinder block off the front of the airplane to get the balance correct, in turn, creating a grossly overweight airplane that lands like a meteorite that is angry at earth.  The cure is in the initial construction.

I will go on record and say that most RC airplanes are over-built.  Based on the stresses that some must endure; some aircraft are rightly built strong.  When powered by glow engines or gas, airframes are subjected to substantial vibration that must be dispersed by the framework to keep the structural components from becoming damaged.  Electric models don’t have the same vibration to contend with and can therefore be built much lighter.  Although construction techniques vary between internal combustion and electric, both disciplines can learn from the other.  The technique presented here allows modelers to build a lighter fuselage structure without sacrificing strength or integrity.

Previous attempts at keeping the aft structure of fuselages light have manifested in a variety of ways.  Some builders may use smaller dimension wood to make the fuselage formers.  This may compromise the integrity of the fuselage, especially where internal combustion engines are concerned.  Another method is to bore holes in the solid sheet formers like a hungry moth in the sweater closet.  This is also a viable option but based on my experience with balsa’s sometimes-erratic grain pattern, I believe there is risk of formers cracking under load.  Another solution is feasible that keeps structure extremely light with little sacrifice in strength; laminated formers.

This is where the gas/glow modeler can learn from the electric builder or more accurately, the free flight builder.  Thin strips of balsa curved to a specific shape and laminated are far superior in strength to other methods used to make curved shapes.  An example of this is the wingtip.  If a curved wingtip is cut from one piece of balsa sheet and the profile is kept to ¼-inch wide for the sake of lightness, the grain pattern has no choice but to run across the wingtip perpendicular to the curve creating a weak spot that will eventually fail.  The traditional solution was to use multiple straight pieces of balsa glued together at angles to keep the grain running more tangential to the curve, therefore improving strength.  This method worked, but involved multiple “butt” glue joints with potential to fail, required a fair amount of cutting and shaping, and was relatively heavy.

It was the free flight guys who adopted the laminating technique for such round structures to attain lightness without sacrificing strength.  Because of the qualities of balsa and other materials for that matter, flimsy wood can be made functionally stronger by imparting a curve to it.  Thus, by bending several thin strips around a form and laminating them to one another, a shape is created that is both lighter than cutting that same shape out of sheet wood and much stronger due to the bend in the wood which creates tension in the wood fibers.  My thought was that if laminated balsa can make light, strong, rounded shapes like wingtips, it can certainly make light, strong, rounded shapes like fuselage formers.

If one searches the internet and takes a look at one of the many cutaway drawings of a full-scale aircraft, it should be immediately apparent that there is really very little internal structure.  Most modern aircraft employ a semi-monocoque design philosophy, which means that the skeletal structure of the airframe is minimal and the metal skin of the aircraft is the structural feature that maintains the shape and handles the stresses placed upon it.  With all of these factors in mind, the laminated former technique took shape.

One of my latest projects is a Dave Platt designed Zero that I am building as an A6M3 “Hamp.”  Dave designed the aft fuselage with solid sheet balsa formers held in place with a crutch made of ¼-inch-square balsa.  I decided to maintain the basic crutch structure but to change the formers to laminated versions.  Because the formers were notched for the ¼-square crutch longerons, I used six laminations of 1/16x¼-inch balsa to allow for the notches with 1/8 inch to spare.

Make a Form:
In order to laminate any shape, a form will be needed.  There are two different ways to accomplish this.  You can use a “positive” or a “negative” form.  For a positive form, each former shape can be cut from cardboard with the part outline reduced by 3/8 inch (in this example) to account for the lamination thickness.  The balsa sticks are then pulled around the outline of the form and taped in place with masking tape.  The advantage of this technique is that the curing of the glue can be accelerated using the microwave oven (a technique borrowed from Pat Tritle).  The disadvantage is that the builder must cut out many cardboard forms and that process is time consuming. 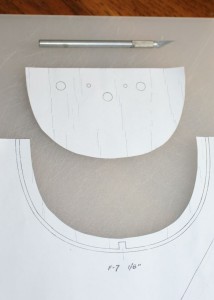 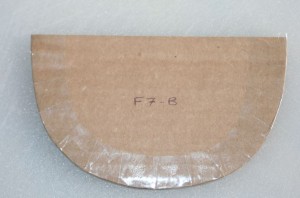 A negative form, which is what I used for the upper fuselage formers, is made by creating a “fence” from pins stuck in the plan along the outer outline of each former.  The balsa strips are then pushed into the form and pinned in place.  The advantage of this technique is the forms are very easy to make but the disadvantage is a longer wait for the glue to dry. 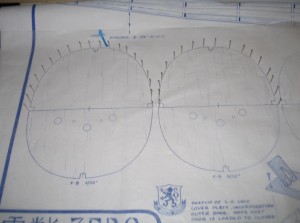 Cut Strips
For my formers, I used 1/16-inch balsa cut into ¼-inch-wide strips.  A Master Airscrew balsa stripper made this an easy task.  Once cut, the strips are soaked in hot water in the bathtub for about 10 minutes.

Let’s Laminate!
Shake some of the excess water off of the balsa strips but leave them very damp.  Put the first strip in place on your mold and temporarily hold in place with pins.  Take the second strip and “burnish” it across the edge of a table or along the outside of the pinned former outline (if using the “negative” type form) to slightly compress the grain of the balsa.  This encourages the balsa strip to bend more readily without creasing. 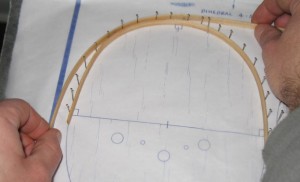 Apply Titebond to the mating surfaces with a disposable brush and bend the second strip in place next to the first.  Keep repeating the process until all laminations are in place.  If using a negative form, pin the strips tightly together so there are no gaps between laminations and allow the glue to dry for a few hours. 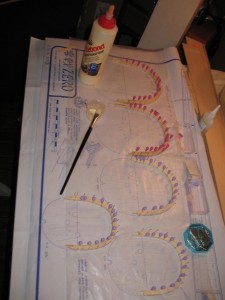 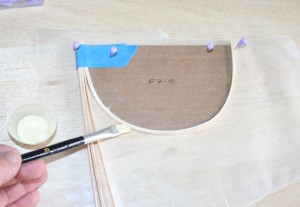 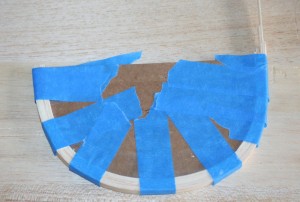 If using a positive form, tape the laminations tightly together and place the form in the microwave for 15 second intervals until the glue is dry.  Be sure to weigh-down the form with a microwave safe cup so that the former doesn’t dry warped.  Remove the former from the form and sand lightly with 150 grit sandpaper.  Now it’s ready to go!

The entire rear fuselage crutch with top formers glued in place weighs less than an ounce and is very strong!  The remaining structure can be built per plans.  Laminated formers may seem like a little more work initially but they are certainly worth the effort in terms of weight reduction without sacrificing structural strength. 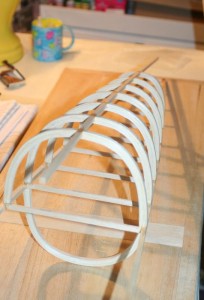