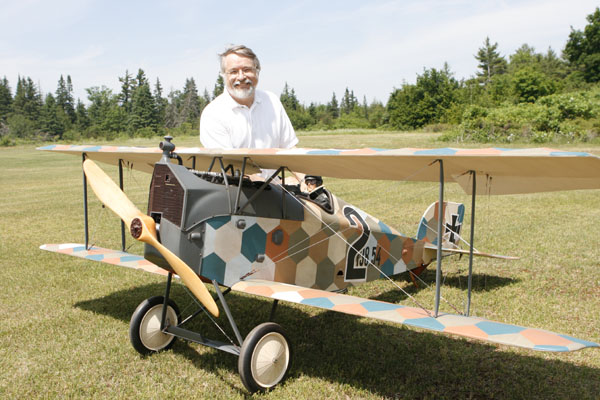 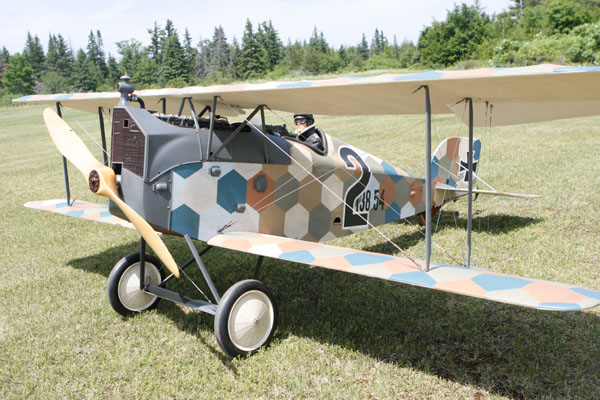 When it comes to amazing scale projects, our good old flying buddy and Model Airplane News contributor, Martin Irvine,is always coming up something unique. Martin has always been known for picking unusual designs and his  1917 Aviatik D1 is no exception.

I chatted with Martin about this seldom modeled WW 1 biplane and here’s what I learned.

What an awesome biplane! Tell us a little bit about its history

The Aviatik DI was an Austro-Hungarian fighter and was flown on the Italian Front against Italian and British forces. It operated from the spring of 1917 till the end of world war 1.

Why did you pick the Aviatik as a project?

I like aircraft that are a little off the beaten path and I’ve collected info over the past 40 years, ever since I first discovered the Aviatik Profile booklet years ago, so I had good 1/48 drawings and dozens of colour schemes. So when I won a DL 50cc gasoline engine in a raffle, I knew that an “inconveniently large” DI would be perfect. It took a couple of months to draw the plans, with lots of advice as this was my first gasoline engine airplane and the largest model I’ve ever built. 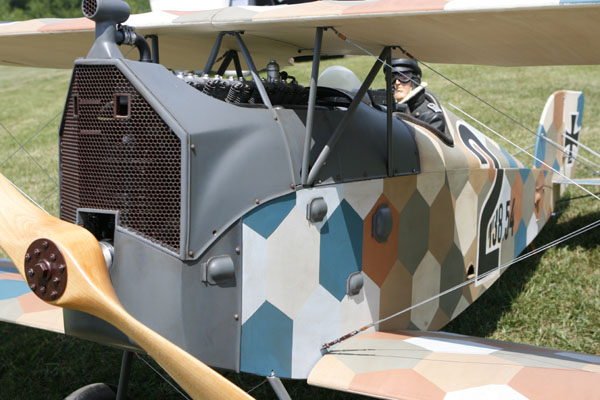 What about the Specs., and construction methods?

The scale is 31.25 percent. I chose that size to match available wheels. This resulted in a wingspan of 99 inches and a weight of 29 pounds plus balancing ballast weight.  Its basic structure is balsa, basswood and plywood. The fuselage is covered in 1/64-inch plywood while the wings are covered with Koverall fabric from Sig Mfg. It is finished with one coat of nitrate dope, two more coats of water-based “Polycrylic” urethane, before I applied the latex color coats. 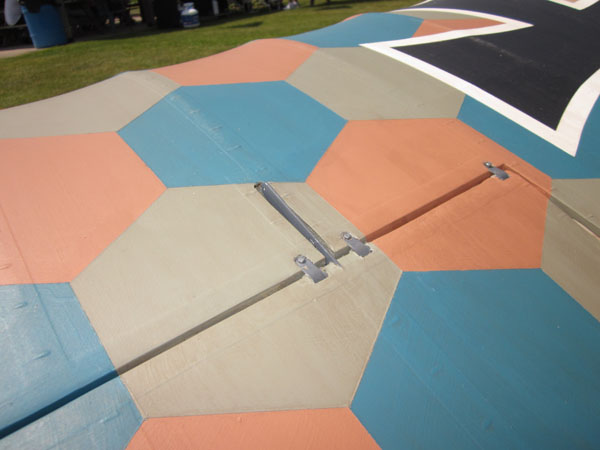 I used Behr indoor/outdoor latex paint samples and the colors were matched perfectly at Home Depot. These are pretty cheap and brush on very well. The hexagons and insignia were first marked with pencil and then I brush painted them, some were masked and some freehand. At this large size, it’s not hard. I was surprised at how far the paint went. I might have used as much as 16 oz. total for the whole plane.

What about that subtle weathering treatment?

The weathering consists of slopping on a layer of very thin brown latex over everything, and then wiping most of it off with a damp cloth. Finer detail weathering is done with pastels before applying a coat of oil based urethane over the whole airframe. 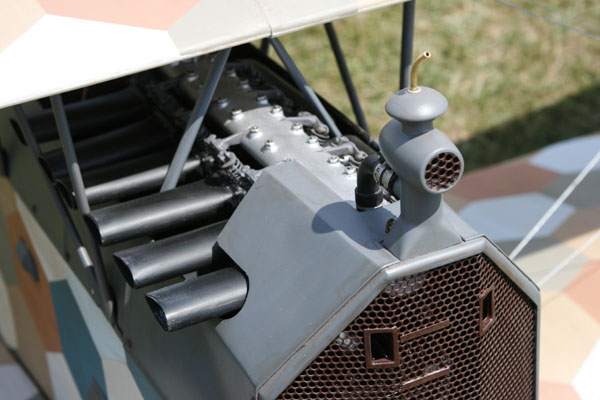 I can’t help but admire your treatment of the dummy engine details. Tell us more.

There are over 550 pieces in the dummy scale engine. I molded the cylinders for the 225hp Austro-Daimler engine from fiberglass with 2-part silicone molds. The exhaust stubs and flanges were also molded in the same way. The intake was carved from balsa, then sealed and painted with vinyl repair paint which nicely approximated a cast metal look and finish. The camshaft housing is based on three dowels, faired and attached to the top of the cylinders. Valve lifters are made from 16 separate parts, (times 12!) and the springs were wound from hardware store wire. This took a while but really looks the part. The radiator is made from computer mesh and the propeller is stained basswood expertly carved by my friend Brian Perkins. I also scratch built the Austrian Schwarzlose machine guns from scale drawings. 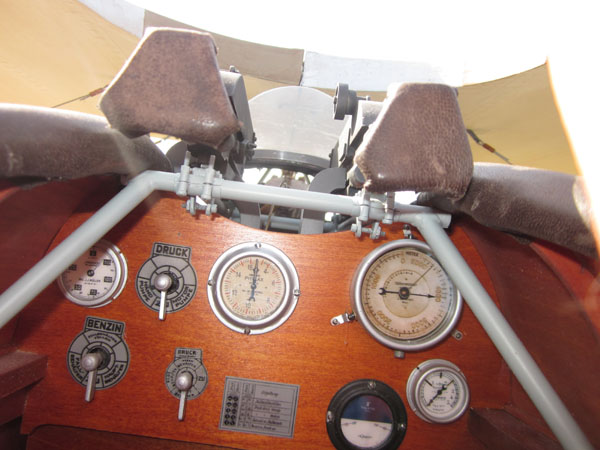 What about all that eye candy inside the cockpit?

The cockpit instruments started with photo reductions of the faces sent to me by a fellow modeler from the Netherlands. He’s never met me, but offered when he heard I was building the Aviatik. The instruments are correct for the aircraft, and were already reduced to 31.25 percent! I made instrument cases out of ABS plastic on a little Taig lathe with small screws and bolts to finish them off. 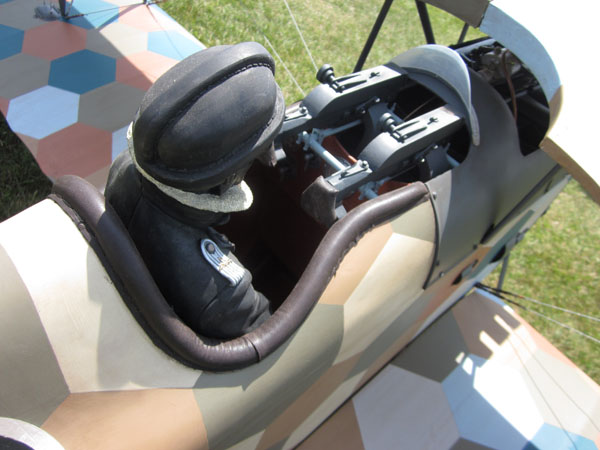 The cockpit combing made with leather over a neoprene core and hand stitched to the fuselage. The pilot figure is from “Aces of Iron” and worth every penny. 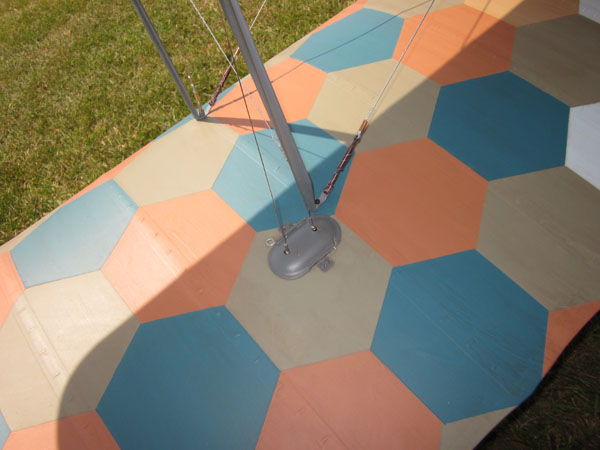 How about the controls and rigging?

The aileron servos are in the wing and are connected directly to the aileron and hidden in the lower wing under scale access panels I vacuum formed. All the hinges are scale and made from brass tubing and straps. All struts are formed aluminum tube from Glen Torrance Models with fittings glued in with JB Weld metal epoxy. All the rigging cables are from Balsa USA with Du-bro quarter-scale turnbuckles mated to Du-bro 4-40 rod ends and then painted a bronze/brown. Overall, I am extremely pleased with the scale looks and the serviceability of the Aviatik. 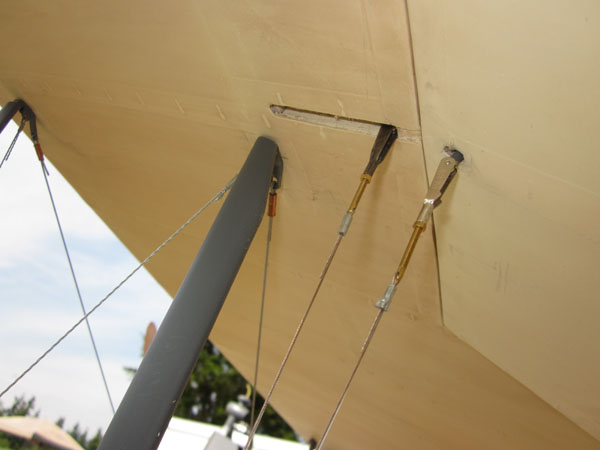 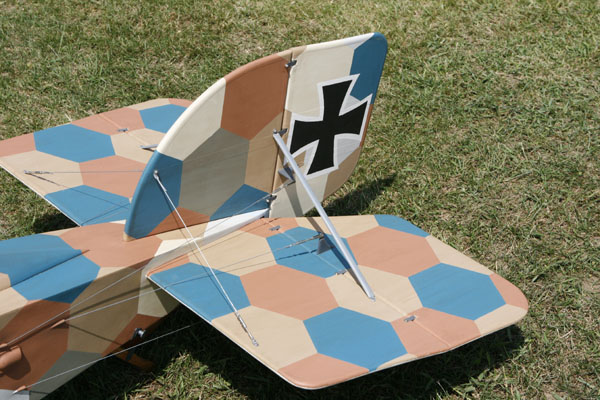