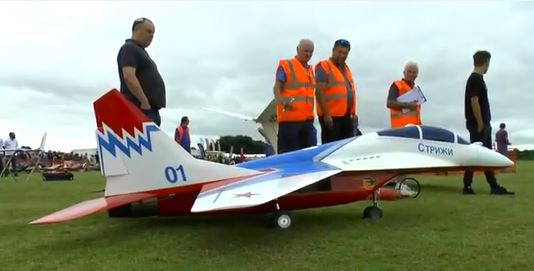 This nearly 1/4-scale MiG-29 is the handiwork of Harold Dowbekin and flown here by Neil Hyde. Neil says, “Harold designed and built the airframe using light ply, cypress and G10 covering, with foam core wings again covered in G10 (pro skin).  The gear is all home built, including the cylinders. The legs are gas struts with coil spring assistance. I took over the finishing works, painting, electronics and engine installation three years ago and the model first flew one year ago, after which some modifications were made including Powerbox Royal, Futaba SBus, Grumania thrust tubes, additional fuel tanks and additional air reservoir. The model is powered by two ATJ 170 gas starts and has better than 1:1 power to weight ratio. 2016 is the first year the model has been shown in public and seems to have been warmly received.” Thanks to Tbobborap1 for sharing video of this terrific jet!