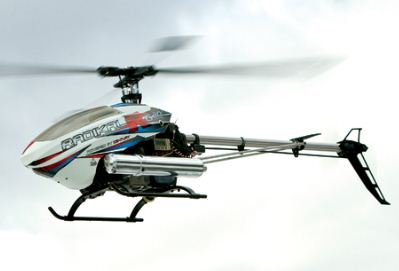 What is the jack knife? Well, it’s a maneuver that looks like a helicopter flying knife-edge on a horizontal plane and doing a sliding half-circle turn inverted while going backward. I’ll break down this simplified description into key steps to help you learn the basics of performing the jack knife.

To perform this maneuver, you must be able to fly inverted both nose in and tail in. A good handle on your throttle curve will ensure that your engine will not over-speed during this maneuver. Better yet, if you have a governor on your machine you will not see any lag from knife-edge to inverted flight. If you’re going to be doing 3D most of the time, I highly recommend getting a governor as it will regulate rotor-head speed throughout all aerobatic maneuvers. Your helicopter must also be tuned for performance in collective and cyclic and your engine should be able to pull at least 1800rpm rotor-head speed.

Ever wonder who performed the first jack knife maneuver? I asked this question recently at the IRCHA Helicopter Jamboree to many well-known pilots and they all pointed to Jason Krause. Having known Jason for about eight years now, I asked him about his idea behind the maneuver. He really wanted to create a maneuver that was aggressive looking yet had a sense of control. I had to ask about the name of the maneuver, and of course it reflects his initials: JK. Thus, jack knife was born. I remember when Jason first started to do this knife-edge maneuver. It was back when .60-size engines were the hot ticket and hints of so-called .90-size engines were just in the works. Jason was at the forefront in creating maneuvers that would wow the crowd and harness the power and speed of these new engine technologies. His ability to place his helicopter nearly inches off the ground is a testament to his depth perception and his ability to control his machine in all attitudes.

The jack knife is more than just a knife-edge flying maneuver; it has a smooth transition to inverted flight making a subtle sliding turn and then backing out inverted at the same height that the knife-edge was halted. I will break down the transitions of this maneuver into simple steps that will make the jack knife doable for almost anyone who can fly inverted forward and backward. Now, let’s prepare for this aerobatic feat.

Decide which side you will enter from and at what altitude. You will want to be traveling right side up at a high rate of speed in a parallel position to your flight box. Your helicopter will be moving forward fast in level flight. Make sure to allow some distance in depth between you and your helicopter; for starters, about 75 feet. When flying in from your right or left, you will start the maneuver within 25 feet of your position and you should start to roll 90 degrees with right or left cyclic. If you are entering from the right you will roll right, if you’re entering from the left, you roll left. The main point here is that the skids should be pointed toward the pilot.

Now that your skids are facing you and your helicopter appears to be defying gravity in a knife-edge state, you need to pull out pitch immediately or you will lose forward momentum. As you learn the maneuver, you will notice that you can extend the amount of knife-edge flight by adding a small amount of negative collective and a little input of left rudder. But for initial learning, just keep the helicopter nose and tail parallel to the ground. Once you get some practice, you can try another trick for extending the length of this maneuver. All you need to do is pull up cyclic just a small amount before you enter your first 90-degree rotation in step one. Then the nose of your helicopter will be pointed up slightly while your helicopter is rolled on its side. It will appear that the tail is dragging slightly. This will help you to extend the forward motion of the knife-edge.

As your helicopter starts to fall out of the knife-edge plane, it’s time to start setting up the angle of attack for a subtle arcing half circle. Next, you will need to put in another input of right cyclic almost 90 degrees. The reason I say ÔøΩalmostÔøΩ is that you want to use some of the forward energy and the gravity effect to pull you through a sliding turn. Again, make sure you still have a distance of about 75 feet from your initial starting point in depth. Keep this distance on your initial attempts, as your helicopter will need space to slide on its back inverted to make a counter-clockwise motion from your flying position if entering from the right side.

Now that you’re sure of the amount of space and what you are about to do, add a cyclic input of almost 90 degrees. Begin to use your forward inertia and gravity effect to pull the helicopter through a half circle in front of you while maintaining altitude. This part of the maneuver is supposed to be graceful and slow. When moving through the arc you will want to elongate the time and slow the machine down and view it as it slides inverted in front of you through the subtle arcing turn.

As you’re coming around inverted in a graceful sliding arc motion, your tail should be pointed in the same direction as when you started the maneuver. That is it should still be parallel to your flight box position. Once you have completed a half-circle motion and have slowly flown backward inverted past your flight position, you are ready to add the final element.

As your comfort level increases, you can play with altitude. It is a simple maneuver that is lots of fun. Keep pushing yourself to see how low you can go and be sure to keep a safe distance from you and your fellow pilots. Have fun flying!