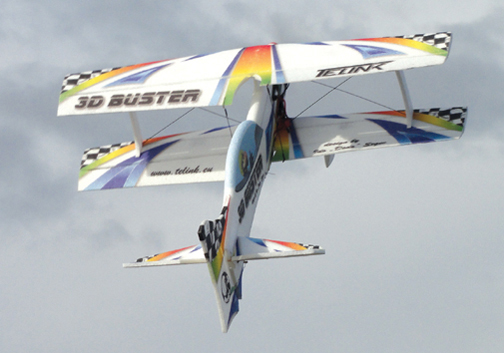 When it comes to the world of aerobatics, exciting moves are endless. A maneuver like the loop can have hundreds of different combinations. A pilot can perform a snap roll at the top of the loop and turn the loop into an Avalanche. This combines inputs for a snap roll as well as inputs needed for a perfectly round loop. Another exciting move is to add an integrated 8-point roll performed throughout the loop. This combines the basic inside and outside loop elements with a challenging 8-point roll. Like I said, the variations are endless.

This month’s column is dedicated to extreme 3D enthusiasts who have a thorough understanding of how to perform an upright harrier as well as traditional hovers and torque rolls. We will focus on the fundamentals and illustrate a maneuver I performed at the 2004 Electric Tournament of Champions, called the “Hovering Square Loop.” Let’s get started!

For a rather difficult maneuver like the Hovering Square Loop, I recommend practicing with both a flight simulator as well as a park flyer before you transition to your larger aircraft. A great choice is called the “3D Buster” from Telink, available in the United States by Twisted Hobbies (twisted hobbys.com). This park flyer has a wing-span of 38 inches and is made of Expanded Polypropylene (EPP) foam, so it’s very durable.

With this airplane, which is made solely for 3D aerobatics, I mainly fly on high-rate settings (on all control surfaces). For any type of built-up wood airplane, however, I use Flight Modes so all control surface rates can be found on one switch. If your transmitter does not have Flight Modes, I recommend that you set up two rate settings. For low rates I recommend 15 degrees of aileron deflection with 20% expo, 20 degrees of elevator deflection with 35% expo, and 35 degrees of rudder deflection with 50% expo. This is just an example, but it can be applied to many types of airplanes with a small amount of tweaking to suit any pilot’s flight preferences.

Aside from the control surface deflections, also note the various percentages of expo. Exponential should be used in moderation as it softens the feel of the aircraft around center stick to make the aircraft respond smoothly and in a consistent manner. Using large amounts of expo should only be used while using large amounts of control throws. All in all, start off with small increments until you are satisfied with your aircraft’s response.

Some radios such as Futaba transmitters use different exponential value that use negative values while JR and Spektrum use positive values to accomplish the same task. Check your transmitter’s instruction manual to properly utilize exponential.

Before you attempt this maneuver, you have to be able to hover an aircraft with a fair amount of ease as well as being able to perform an upright harrier. Since this maneuver begins with the aircraft in an upright harrier, make sure you can control the aircraft at a very slow ground speed at an extremely high angle of attack. Oftentimes, while flying in this attitude, the aircraft will be anywhere between 45 and 70 degrees relative to the horizon. In addition, the transition from a harrier into a hover is ideal as the pilot will not have to gain any altitude in the process.

Now that the airplane is in an attitude that has a rather high angle of attack, it will be easy to transition into a hover to establish the first point of the square loop. Here, I advise that you perform a rather small square loop on your first few attempts to become familiar with your aircraft’s response. This is an extremely complex maneuver and will take a fair amount of practice to master, so don’t become discouraged. Only practice will hone your flight skills! 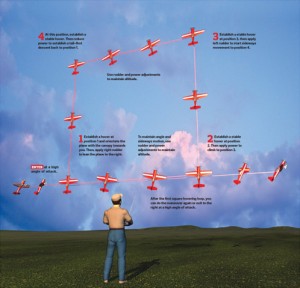 When the aircraft is about 15 feet from the pilot’s center, transition to completely vertical. This will define a square loop that has sides about 30 feet long. Since the first point has been established, lean the aircraft slightly in yaw so that the airplane can travel to the second point in the square. If we lean the aircraft at an 85-degree angle to the right, left rudder will be required so the airplane will maintain this attitude as it travels to the second corner.

After your airplane travels 30 feet, transition to completely vertical while making any necessary rudder and throttle corrections. Once vertical, apply power to climb 30 feet and establish the third point. Stabilize the altitude with changes in throttle, and again, lean the airplane so that it is angled about 85 degrees in yaw to “fly” the airplane parallel to the runway and in the opposite direction of the start of the maneuver.

At the fourth point, get the airplane in a completely vertical attitude using a balance of rudder, throttle, and elevator, and prepare for the tail-first descent. Honestly, this is the most challenging leg of the maneuver as the pilot must decrease power slightly so that the airplane will begin to perform a variant of the tail slide. If the aircraft becomes unstable, apply power to stop the descent. Stabilize the airplane and then continue the descent. Once at the starting point, lean the aircraft in yaw, and continue down the runway holding rudder input to maintain your altitude and prepare to perform the maneuver another time!

Let’s break it down

STEP 2. With the airplane is perfectly vertical, apply throttle until it climbs to about 30 feet. Once the airplane nears the top, decrease throttle slightly and make any throttle adjustments to maintain altitude. Most airplanes only require a slight decrease in throttle to arrest the climb. Typically, I recommend increasing throttle in small amounts so that the airplane gradually climbs from the second point to the third in this maneuver.

STEP 3. Since the airplane is already in a vertical attitude, apply left rudder to lean the aircraft in yaw so that it is at an angle of about 85 degrees in the new direction of travel. Once the airplane has travelled to the pilot’s center position, continue on until the aircraft another 15 feet on the other side of the runway. Apply throttle and right rudder to get the airplane in a hovering attitude and define the fourth point.

STEP 4. Now, the fun begins. You must descend from the fourth point in the loop down to the first. I recommend that you make only a slight decrease in throttle so the airplane begins to descend while being perfectly vertical. Most airplanes will want to rotate (roll) during this segment, so if it does simply add a touch of throttle to stop the descent. Stabilize the airplane again and then continue until you are at the same altitude and position that you established first point in this maneuver. Once complete, lean the aircraft slightly and continue down the runway again to either repeat the maneuver or fly out and exit the maneuver.

There is no doubt that this maneuver is demanding and very complex. It will take time to master. Keeping your airplane in a hover takes many small control inputs and corrections. After some time and practice however, performing the Hovering Square Loop will be extremely rewarding as you show complete synergy between you and your aircraft.