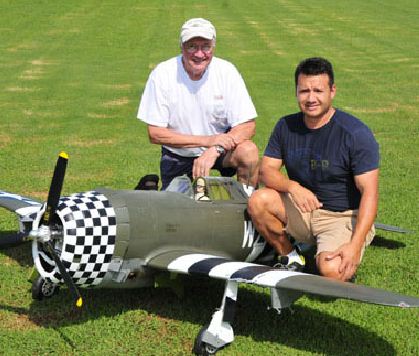 Text and Photos by Jerry Smith and Pedro Sanchez

The P-47 was first introduced in the European theater in 1942 along with the 56th Fighter Group stationed in Boxted, England.  It was also in service in Italy by 1943. The “Jug” or “T-Bolt” , as it was affectionately known, was big, robust, and heavy.  Its sheer size limited propeller ground clearance making takeoffs a challenge. This enquired the pilot to hold the tail low until takeoff speed was attained. At higher speeds pilots complained of high control stick loads.  Republic Aviation addressed these problems and others in subsequent variants and the 47 began to take its place in the history of aerial warfare.

My feelings of endearment toward the P-47 come from my brother, Lt. General Donavon F. Smith who, when based in England during the early 40’s with the 56th Fighter Group, flew many bomber escort missions.  He later became an ACE, shooting down over 5 enemy aircraft.  While P-47s were used to escort American bombers on their daylight raids against enemy targets, they often were used to attack and strafe ground targets such as railroad viaducts, supply trains, road transport convoys and airfields. In this role a P-47…loaded for bear….. weighs in at around 8 tons! This included 350 rounds of .50 caliber ammunition for each of its eight wing-mounted guns.

The Meister Scale P-47 kit is offered in a couple of options. It can be purchased in an all wood laser cut kit or you can opt for the fiberglass fuselage kit, saving much time, and then buy the Wood Wing and Tail laser cut kit providing you material for the wings and tail.  You can also buy a Short Kit, laser cut, however you will have to provide your own sheeting and sticks.  The plans are sold separately.

(Above) Wanting to see what it looked like I assembled the primed fuselage with the glassed flying surfaces.  It is starting too take shape.

Having laser cut parts in built-up kits these days is a real plus, allowing for a perfect fit while engraved them for easy identification. Building experience is required before you decide to take this one on.  I started the build with the fiberglass fuselage by sanding the locations inside where the bulkheads were located, then applied Mercury 30 min. epoxy to each and set them in place.  The two-piece fiberglass fuselage is a piece of art with panel lines, vent holes and inspection plates and other features in complete detail.  I noted very few pinholes.  Even the belly pan is included.

(Above) Looking at the retract mounts in the wing, I made them thicker by adding another ¼” thickness, wanting them stronger. I made a change here, my own personal preference, and made the wing spars out of hard wood. The wing went together great with good fitting laser cut parts.

Next I moved on to the wings.  After locating all the parts and reviewing the plans I pinned down the wing spar to the plans. I made a change here, my own personal preference, and made the wing spars out of hard wood. The wing is flat bottom so it can be built on a flat surface.  A good move Meister! Although the wing is somewhat labor intensive, with many laser cut parts, it all fits together extremely well and I was pleased with it when assembled.  The laser cut parts included were excellent and just as important is the wood they were cut on.  It looked to be hand picked and all was excellent in quality.  I installed Seirra Precision retracts because I have used them in the past with good luck.  Looking at the retract mounts in the wing, I made them thicker by adding another ¼” thickness to them.  My own personal preference of wanting them stronger; one of the benefits of building your own airplane.  The wings, ailerons and flaps are fully sheeted and I prepped them ready for finishing.

The tail parts came next.  Of course, the fin is molded in the fuselage so you need only the rudder to build and sheet.  The stab is built in one piece while the two elevators are tied together with a hefty wire joiner.  The control horn is mounted in the center putting it out of site in the fuselage.  Here again construction was easy and all the surfaces were sheeted like the wings.  After prepping the flying surfaces I covered them with ¾ oz. fiberglass cloth and resin.  The fuselage was sanded, filled and primed and all the parts were painted with Tamya acrylic paint.  At this point the graphics and lettering were applied, then an over-spray of dull clear coat was applied to seal them in. 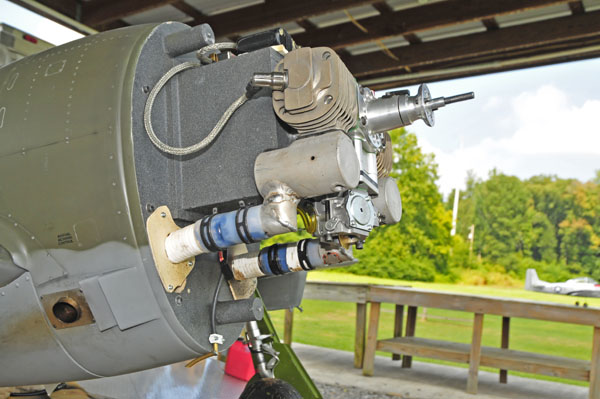 (Above) The BME 116 had to be rotated slightly to fit under the cowl.  Note how the scale exhaust was accomplished. Some loss of power was expected. 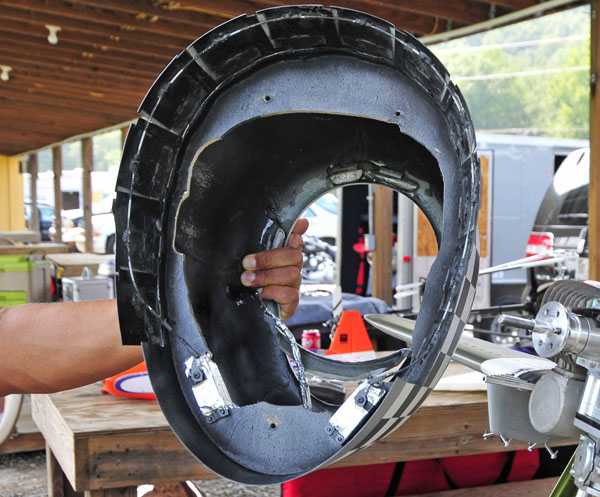 (Above) Here is the secret to functional cowl flaps.  Each flap is hinged at the bottom.  A short piece of Sullivan control rod sleeve is bonded near the top on each flap.  A cable is threaded through each flap with sleeve and attached to a servo at each end.  The servos move in unison providing a lasso effect and close the flaps. Reversing the servos open the flaps.  The servos are mixed with the throttle and the flaps close above half throttle.

I powered the 47 with a BME 116cc twin swinging a Solo 3-blade adjustable pitch prop.  I opted for scale functional exhaust ports to add more realism.  The cowl, an optional item, was finished with functional cowl flaps.  These flaps were integrated with the inter-cooler flaps at the rear of the fuselage and the throttle.  At idle to ½ throttle the flaps remained open and then closed above ½ throttle.  Neat huh?  In all I used 14 servos to power all the functions. 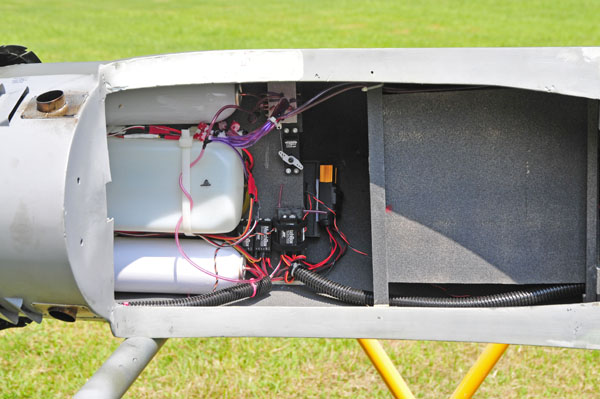 (Above) The fuselage is roomy, proving space for the many components required for a scale airplane.

This was my first Meister Scale kit and I wasn’t a bit disappointed.   The quality of the laser cut parts, the fiberglass fuselage, the supplied lumber and great plans were all outstanding.  Of course I chose to go all out on this bird with detail and was happy to know that many optional accessories were available from Meister to complete it.  It now resides in my hanger along with other war birds and is the pride of the pack.  When I decide to build another war bird will it be a Meister Scale?  You bet! 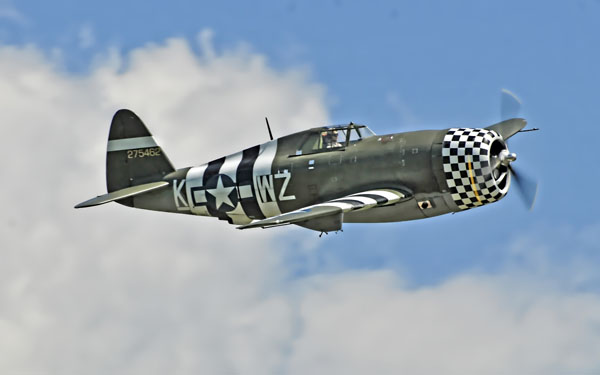 We flew the P-47 at the Georgia model Aviators (GMA) club field where there was a choice of grass or hard surface runway.  We chose the grass.  The “Jug” does handle well on the ground with those wide spread landing gear. The first take-off was great. I let her run on the ground because I like long take-off’s.  Once in the air a couple of clicks of down and she was flying great.  The engine power was enough to fly a little better than scale speeds and that’s the way I prefer it.  The first landing was very normal.  I was a little nervous not having landed a Meister Scale P-47, but I kept some power on and set it down on the wheels……What a thrill!  Later I added some pitch to the Solo prop and that seemed to help a bit. The P-47 is a pussycat to fly and it couldn’t have flown any better. 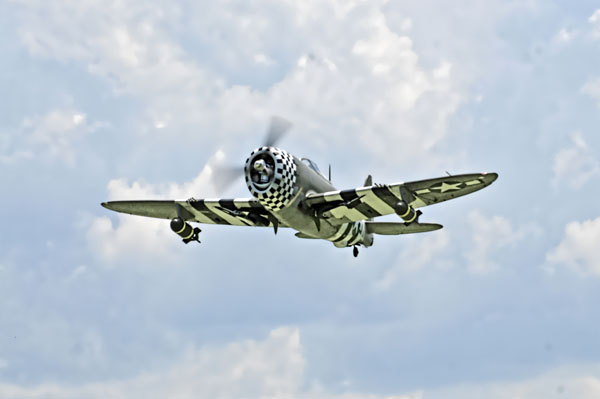 Stability:    The 47 fly’s like it is on rails and is very smooth and predictable.  The recommended CG on the plans proved an excellent starting place.  This makes the plane a delight to fly putting the pilot at ease.   It has a very large flight envelope; from high speeds to incredible slow speeds due to its wing airfoil.

Tracking: After a slight trim change the plane flew hands off in level flight.  It penetrated well in the wind and went wherever you pointed it.  It was very predictable on the controls and easy to fly.

AEROBATICS:  Although not the aerobatic type, the 47 will do loops, rolls, split S and maneuvers like many of the war birds can do. 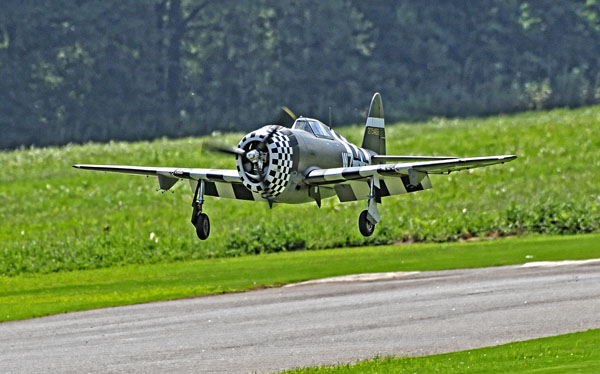 GLIDE AND STALL PERFORMANCE:  Because of its higher wing loading the 47 is no glider however; it will glide better than most because of its flat bottom wing airfoil.  Just remember to keep a little power on and don’t let it get too slow.  Stalls are rather sharp depending on how you approach them, then relax
the elevator and add power for recovery. 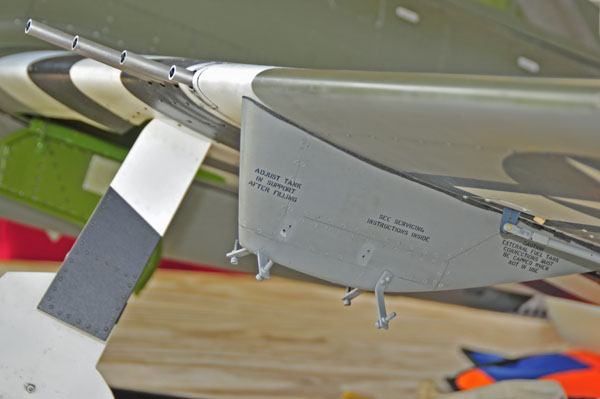 (Above) Wing fuel tank/bomb rack is an optional accessory from Meister but does add realism  providing you with scale options.

The Meister Scale P-47 kit is no doubt for the experienced builder and turned out to be a wonderful experience for me.  I like to impart a lot of detail on my war birds and the 47 accommodated me.  The fiberglass fuse was high in quality.  I was impressed with the wing as it fit in the saddle perfectly. Everything was straight and true. I was very happy to see that Meister Scale uses quality balsa in their kits. I have bought many kits through the years and usually end up purchasing my own balsa because the balsa provided is sub grade.nbsp; If you are a hardcore war bird lover like me, then Meister Scale war birds are the way to go. 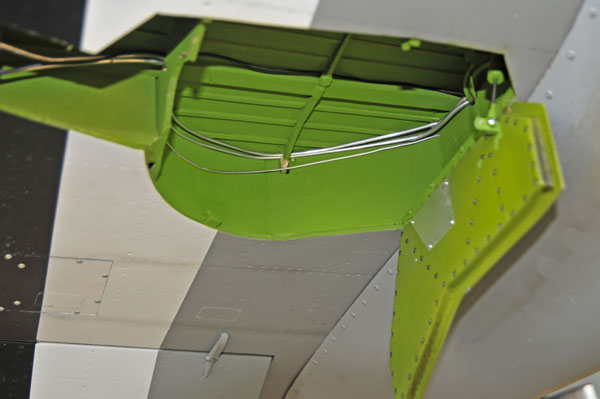 (Above) Airlines for retracts were made of 1/8” aluminum tubing to simulate the hydraulic lines.  Note how the wheel door is built.  Not just a piece of flat wood. 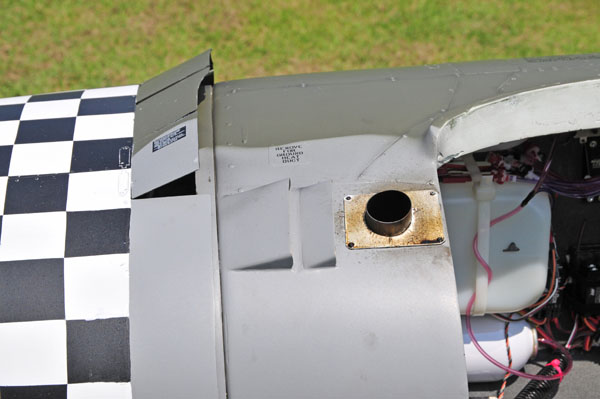 (Above) Scale exhaust port with louvers.  Note the cowl flaps are open when the throttle is at low setting. 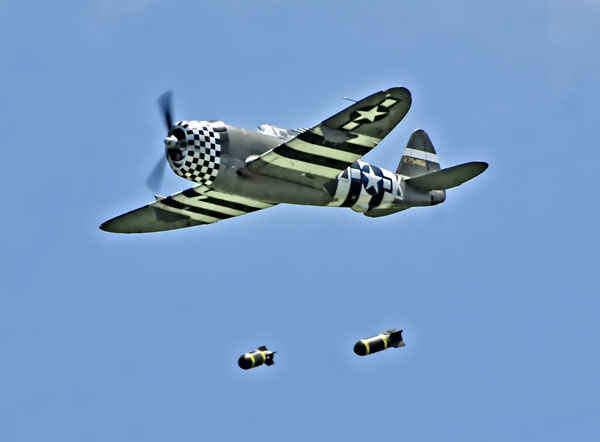 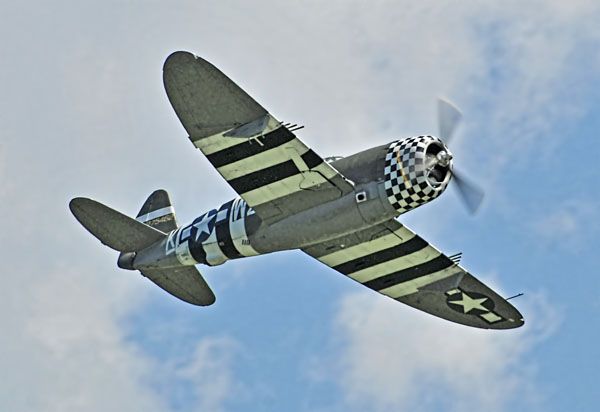