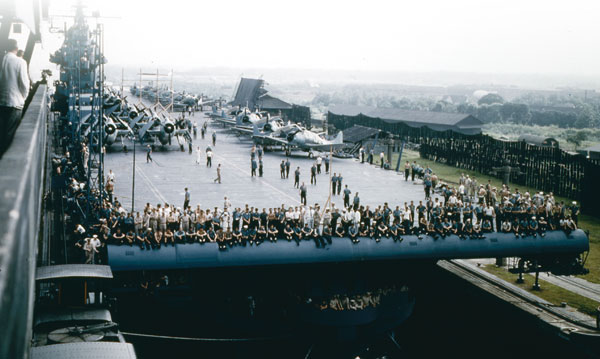 Some photos speak to you in ways that others don’t, and for me, this is one of those. In fact, it haunts me. For whatever reason, the sight of so many fresh young faces smiling into the camera, every one of them knowing they were about to experience the horrors of war, seemed to drive home the fact that WW II was fought by neighborhood kids who should have been hanging around the malt shop or working on their jalopy.
America wasn’t then, and isn’t now, a warrior society. Regardless of how the rest of the world sees us, we are, in our hearts, not geared to take the offensive. It is seldom, if ever, that we take to arms without being goaded into it. However, to paraphrase Isoroku Yamamoto, when the sleeping giant awakens, stand back! We are hell on wheels when in defense mode, and when that requires us to go on the offensive to strike back at our enemies, we are more than willing to do so. And generally do so with a vengeance.
Each of the young men in this photo, as casual as their posture may make them appear, knew exactly what lay ahead of them. Their ship, CV-10, the USS Yorktown, seen here transiting the Panama Canal on the way to the Pacific in mid-1943, was originally going to be named Bon Homme Richard. However, before launching, it was renamed to commemorate a previous carrier, the USS Yorktown (CV-5): barely a year earlier CV-5 had gone down in the Battle of Midway taking hundreds of young men just like these with it. And that was the kind of motivation that put these young men on this ship. They knew the fight had been joined, and the only way to win was to throw everything they had into it.
Regardless of whether they were from New York’s Lower East Side or a black dirt farm west of Omaha, these young men and their not-so-young leaders loved their nation’s way of life and would defend it in any way and anywhere necessary. Be it as a nation, as a branch of the service, or as individuals, they recognized the threat, and they’d be damned if they’d negotiate with what we would now call terrorists. Their war would be unconditional. Their service would be unconditional. The surrender they would demand would be unconditional.
Today, it’s nearly impossible for those of us who benefitted from these young men’s actions to put this photo into context. It’s hard for us to remember that the SBDs and TBFs on the deck were state of the art, the period’s equivalent of Super Hornets, and that their ship, straight decked and barely half the size of a modern carrier, was a floating fortress, feared and stalked by their enemy. It’s hard for us to remember that hundreds of thousands of other seamen grinned into thousands of other cameras for the folks back home. For many of those at home, a photo like this would be the last tangible memory they would have of their fathers, sons, husbands and brothers.
If the question were asked of those in the photo, “Would all of you who are still alive today, please raise your hands?”, we know that the number would be pitifully small. If, on the other hand, the question asked was, “Would all of you who would willingly do it again, please raise your hands?,” we know the vote would unanimous. That’s just the kind of people they were. And that’s just the kind of nation we are.
To those who didn’t return: your hometown is safe. You did your duty well. And for generations we’ll be trying to live up to the standards you set.                                -Budd Davisson, editor-in-chief, Flight Journal magazine

A note from Budd: Memorial Day coincides with the newsstand release of the August issue of Flight Journal. In our continued celebration of the Navy’s 100th anniversary in this issue, we focus on the role of the Navy in WWII and, while preparing that article, we stumbled across the photo above. It reminded us what Memorial Day is all about, something we can’t forget. The photo had a profound effect on us and we thought we’d be remiss if we didn’t share it with our readers.