The world’s most iconic B-17 Flying Fortress is nearly ready for her long-awaited unveiling, just in time for the 75th anniversary of her final mission. Memphis Belle, an early-model B-17F, was flown by the first 8th Air Force crew to complete 25 missions, earning pilot Robert Morgan and his crew the honor of returning stateside for a morale-building war bond tour.  The aircraft and her crew gained added fame from a 1944 wartime documentary directed by William Wyler, and decades later a 1990 motion picture reintroduced the stirring story to a new generation.

On January 4, 2018 the United States Air Force Museum hosted a media event at the restoration hangar to showcase the latest progress in a 13-year project to restore and preserve Memphis Belle for display in the museum.  The project began in 2005, and no effort has been spared to return the famous aircraft to her wartime condition, using original components and materials wherever possible.  During the restoration, repairs of battle damage and other modifications were uncovered, including an entire vertical stabilizer that was grafted on to replace the heavily-damaged original.

With the airframe work completed, the restoration crew then spent two months repainting the Belle using historically accurate paint formulas.  They were aided in this effort by the existing archival color footage from William Wyler’s documentary.  His crew shot more than 11 hours of color film, and all of it was available to the restoration crew, along with a wealth of color still photos.  The restoration is incredibly detailed, and many missing parts were fabricated from scratch, including a glycol heater completely hidden in the left wing.  This shows the thoroughness of the restoration, even for components that will never see the light of day.

Museum curator Jeff Duford explained that in many ways the Belle was an ideal restoration project.  Flown by the first crew to complete 25 missions, she represents the heavy sacrifice paid by early-War 8th Air Force aircrew, during a time when the odds were 3 in 4 of a crew not completing their tour.  Also, the wealth of archival information on this particular aircraft made it much more practical to make the restoration absolutely accurate.

Memphis Belle will be the centerpiece of a three-day special event this spring, culminating in a May 17, 2018 unveiling marking the 75th anniversary of her final combat mission.  The Belle will be home at last. 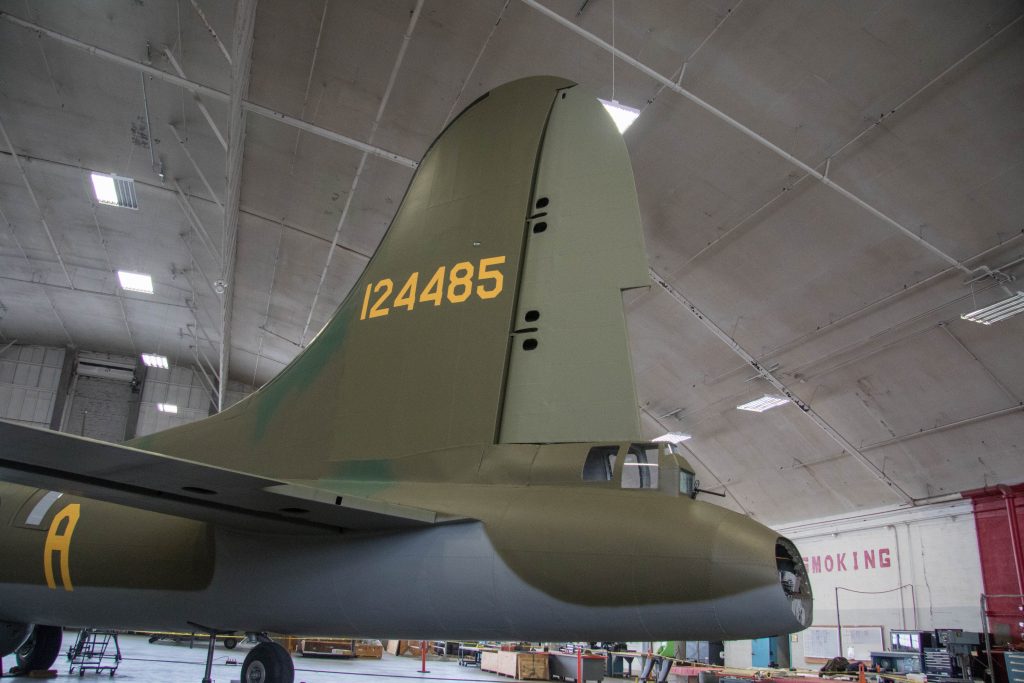 If you look closely in this photo, you can see the mismatched paint where a new vertical stabilizer was installed to replace the flak-shredded original. The slightly different color of the fabric-covered rudder is also historically accurate. 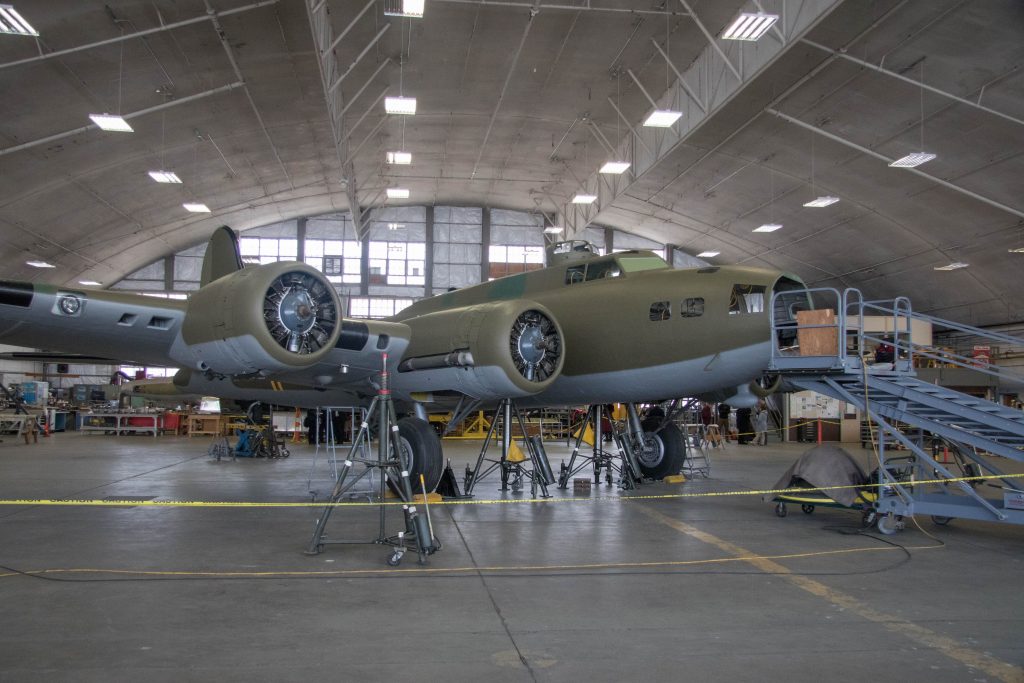 While the nose bubble, Hamilton Standard propellers and Browning .50 caliber machineguns are all still to be installed, you can see the graceful lines of the early-War B-17F, before the large chin turret and other wartime upgrades were added. Shortly after this photo was taken, the restoration crew added the Belle’s iconic nose art. 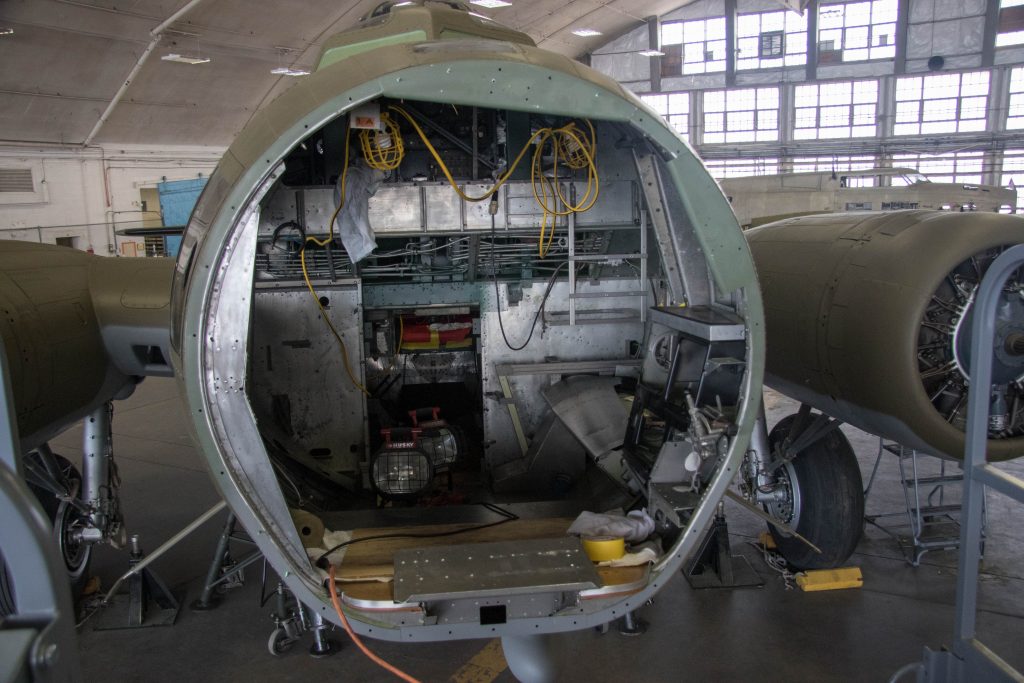 The nose bubble will soon be installed, but not before the bombardier’s controls and the famous Norden bombsight are mounted in place. As far advanced as the work is, there’s an endless list of details still to be completed. 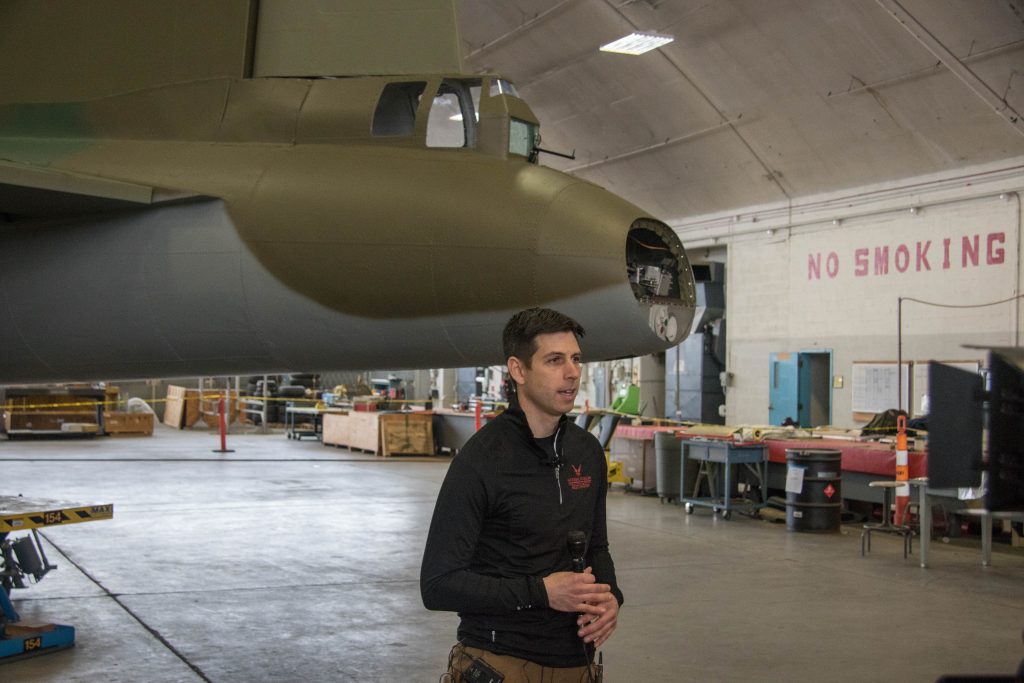 Restoration technician and licensed A&P (airframe and powerplant) mechanic Casey Simmons fielded questions from the media after his crew installed the left aileron and elevator. Casey has worked on the Belle’s restoration since 2007 and said one of his favorite projects was a glycol heater that’s completely hidden inside the left wing. 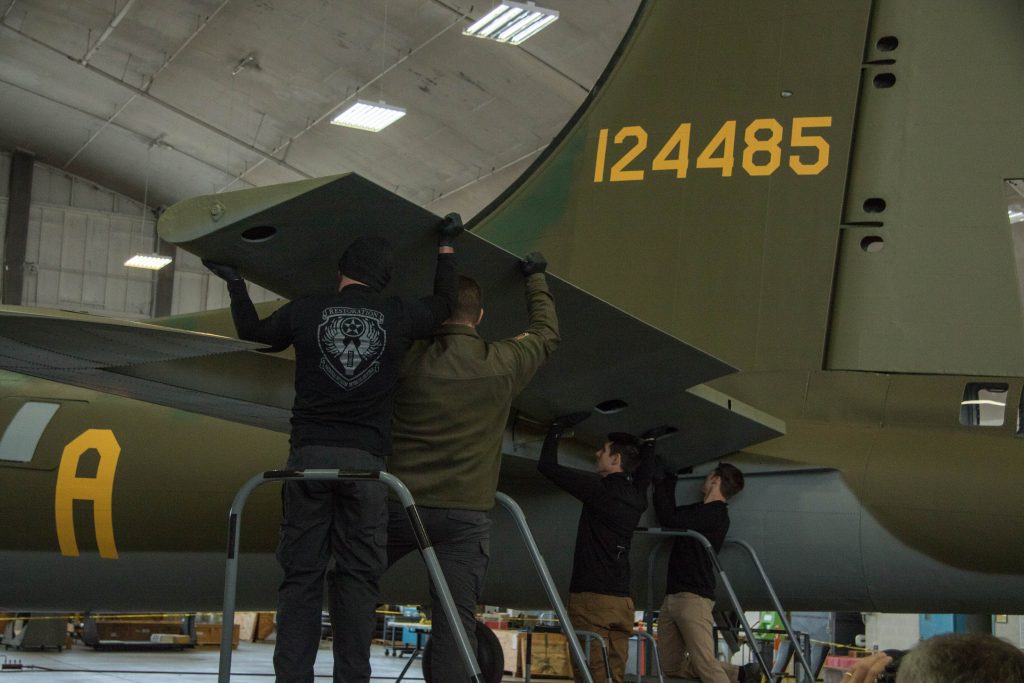 The restoration crew next installed the left elevator. This was a complex operation, including coupling the elevator to its actuator while maneuvering it over the long hinge brackets. The mechanics wear nitrile gloves to protect the fresh paintwork on this priceless artifact. 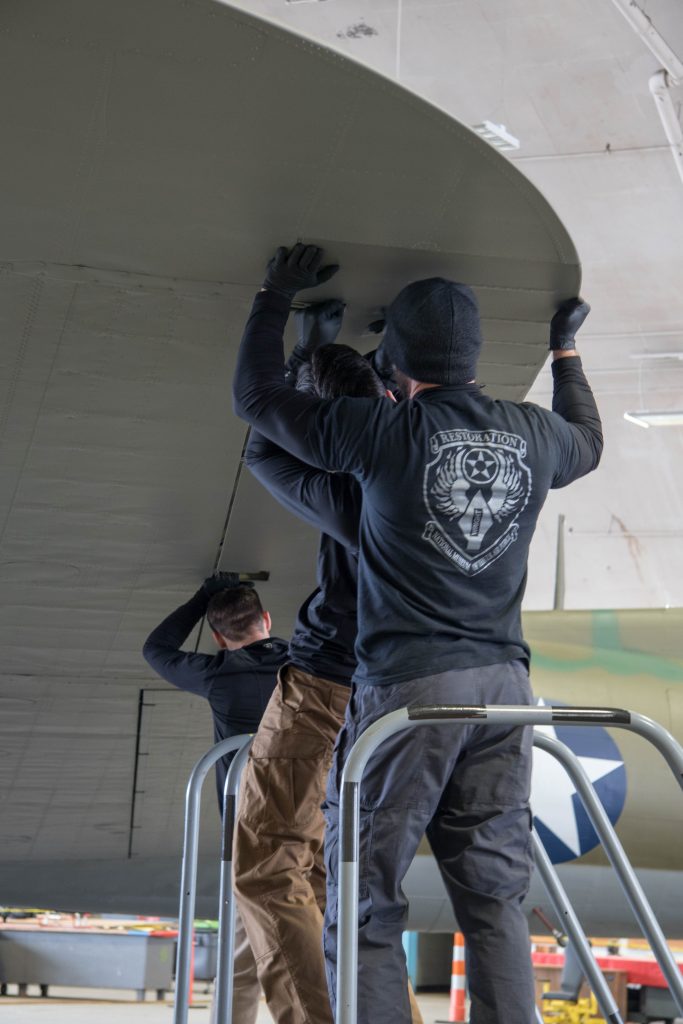 During the event, mechanics of the restoration crew installed two of the fabric-covered control surfaces. Here crewmen hold the left aileron in position as the hinge pins are slipped into place.

During a January 4, 2018 media event at the restoration hangar, curators at the United States Air Force Museum showcased progress in restoring the Memphis Belle, flown by the aircrew to complete a 25-mission combat tour over Europe.