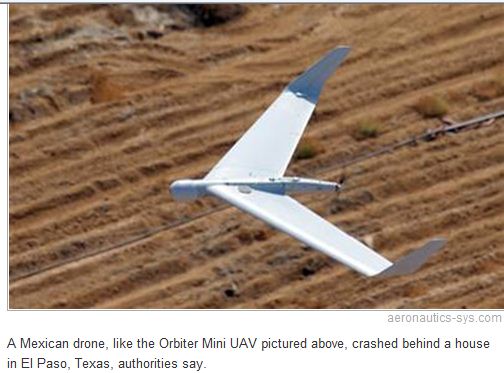 A small unmanned Mexican drone that crashed into a backyard in El Paso, Texas, was part of a surveillance test by Mexican authorities that ended abruptly when operators lost control of the aircraft, a U.S. security official told NBC News on Friday.

The Department of Homeland Security official, who spoke on condition of anonymity, said the 7-foot-long Orbiter Mini UAV drone flew off course during the test on Tuesday, then veered into Texas airspace and crashed behind a house in El Paso’s former agricultural area, where homes are typically built on 1-acre lots. No one was hurt.

The official did not know whether Mexican law enforcement or military officials were operating the aircraft, but said that the Mexican government was using it for surveillance of the border, NBC News reported.

U.S. officials did not release the exact location of the crash, but sources have said it was less than a mile from the border. The neighborhood is separated from Mexico by the Rio Grande, floodlights, the 15- to 18-foot tall border fence, a chain-link fence, a line of poles with surveillance cameras and a highway, according to The El Paso Times, which first reported the crash.

“We responded to a concerned citizen’s call and recovered a small Unmanned Aerial Vehicle (UAV), which belonged to the Government of Mexico (GOM),” Jenny L. Burke, a spokeswoman for Homeland Security, said in a statement.

The lightweight drone, intended for use in military and homeland security missions, as well as low intensity conflicts and urban warfare operations, was built by Aeronautics Defense Systems of Yavneh, Israel, according to the Times.

The aircraft is launched from a rail, and can stay aloft for 3-4 hours, carrying a payload of up to 3.3 pounds, according to the manufacturer’s website.

The National Transportation Safety Board is collecting data on the crash from the Border Patrol, said spokesman Keith Holloway, NTSB spokesman.

“We’re not sending anyone to the site and the aircraft has already been returned to its owner — the Mexican government,” Holloway said.

Officials at the Mexican consul’s office in El Paso did not immediately comment.

Vincent Perez, spokesman for U.S. Rep. Silvestre Reyes, said the congressman’s office was notified about the incident Thursday after asking the Department of Homeland Security about media reports of the drone.

“We don’t have all the details yet, but we expect to receive more information because we would like to know what happened,” said Perez on Friday.

Perez said he was familiar with the area and its proximity to the border.

“Having grown up in El Paso, I wouldn’t be surprising to see that level of cooperation between the U.S. and Mexico and that it is a very positive relationship,” Perez said. “But it seems that authorities dropped the ball by not saying anything and now have added fuel to conspiracy theorists.”

John Concha, a spokesman for the El Paso Fire Department, said emergency units were not sent to the crash site because no one was injured.