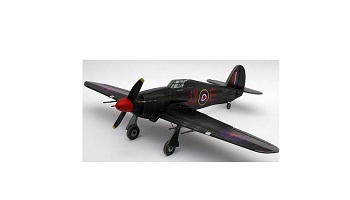 With the rapid development of fighter aircraft during WWII, the Hurricane became appreciably more vulnerable. But this didn’t spell the end for the type but just a shift in roles. BE581 is a perfect example of where the Hurricane found a niche; as a Night Fighter, equiped with powerful 20mm cannon, an uprated Rolls Royce Merlin XX powerplant and painted in an all encompasing matt black for stealth. Flown by Czech pilot ace Flt.Lt.Karel Kuttlewascher of the RAF’s oldest unit, the legendary No.1 Squadron, the ‘Night Reaper’ created havoc on intrusion raids, picking off enemy aircraft as they returned to their bases in Northern France.