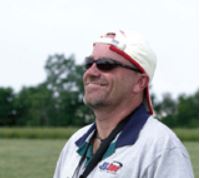 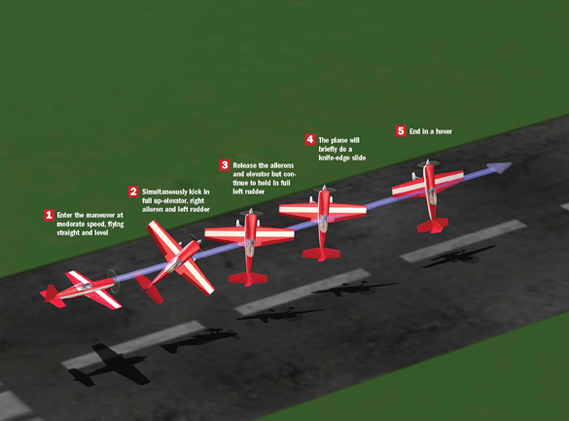 I like to do a knife-edge slide, but I have also heard it called a knife-edge pop-up or a knife-edge wall. The stunt is essentially a quarter inside tumble, where the nose kicks up and the airplane rolls, top towards you, and then yaws in the direction that the plane is moving. It quickly transitions from level flight running parallel to the runway to the plane pointing straight up, looking at the top of the airplane. The plane keeps the momentum it has and ends up in knife-edge flight and sliding sideways.

I basically start the maneuver by having the plane enter it from level flight at moderate speed. Then I simultaneously add full up-elevator, full right aileron and full left rudder. When the plane is almost pointing straight up with the top facing me, I release the ailerons and elevator but still hold in full left rudder. The plane will hold that position, which is a high-alpha knife-edge, and slide sideways for a short distance. It is important not to carry a lot of speed into the knife-edge slide because the plane will start to kick up and flip around and may end up doing a Lomcevak or a tumble. I found that doing it downwind helps, and you do need full 3D rates on all surfaces. It looks really cool when you do it on takeoff.