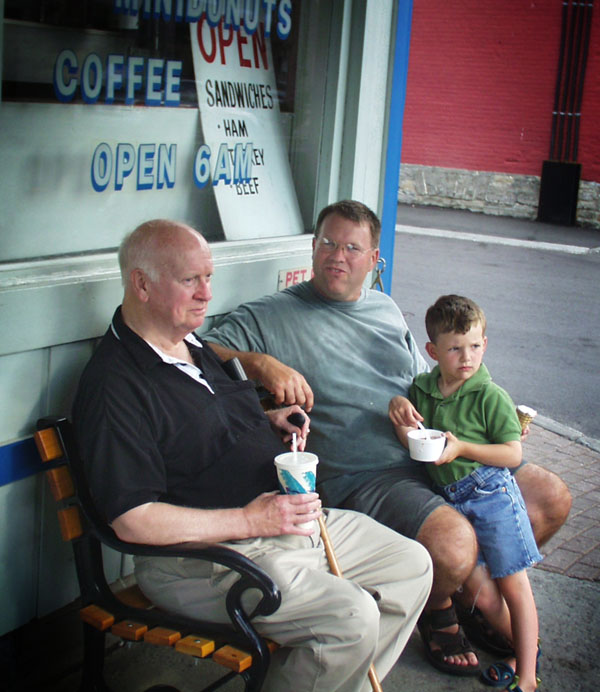 Father and son teams are the very glue that helps our hobby of aero-modeling remain strong. Many activities and sports bring family members together, but RC family ties often last a lifetime. Mike Whitelaw is an RC modeler like many of us reaching our later 40s, thirty years of experience in a hobby with a passion as strong as the day he first smelled glow fuel. 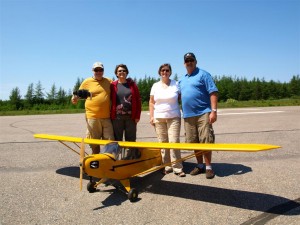 His modeling journey began with his Dad Kevin. Every Saturday they would spend the day at a movie watching the latest Pink Panther flick with Peter Sellers. This routine continued years until one Saturday morning their destination was the MAAC Nationals held in Quebec. Driving to the event they saw a scale model of a P-38 Lightning fly overhead.  The pair then began talking about modeling. Kevin shared previously unheard stories of building and flying free flight and rubber-powered models. Mike’s eyes wide with wonder and this was the beginning of a beautiful friendship.

In the weekends that followed, the activities centered on making and flying model airplanes like the Cox control-line PT-19. This continued until Kevin called to say he had decided to get into radio controlled models. He had purchased a Kraft radio system, O.S. .30 engine and a Carl Goldberg Falcon 56.  Now their time was spent at the flying field.  One weekend when Mike was about 13 Kevin turned to him and asked, “you want to try?” The two worked together to earn their RC wings and Mike (young reflexes and no fear,) got them first flying the Falcon.  Eventually Kevin Whitelaw became known for his ability to fly far, low, in and out of the corn.  Skill not often seen in today’s 3D and turbine jet world. After a while life continued and the team took a break from RC.

In the mid 1980s Mike and his young family moved back to southern Ontario, closer to where his Dad lived and the opportunity to share their passion for modeling presented itself again.  As members of the Humber Valley R/C Flyers they met Scale RC Master Builder Graeme Mears. An accomplished scale competitor, and model designer Graeme’s amazing aircraft left them awestruck and helped reinforce their modeling desires and helped them set some goals.  Building, designing and flying is indeed a huge part of the hobby and another other equally important part is the social scene. The acquaintances, friends and relationships you make at the flying field are priceless.

In the early 90s Mike and Kevin made their first trip to Maragree for the annual father’s Day Fun-fly hosted by the Cape Breton R/C Modelers.  Maragree is nestled in the Cape Breton highlands of Nova Scotia on the Cabot trail.  Kevin fell in love with its rugged beauty and warm people. Every year when the event was over, they start their planning the next year.  For 20 years they’ve attended this premier event for Atlantic Canadians.

Every modeler has a favorite plane or type.  For Mike’s Dad it was the J3 Piper Cub, a classic that introduced many to aviation.  Mike first built a ¼ scale cub, a joint venture for father and son only surpassed when a 1/3 scale J-3 was built to fly at Margree.  The perfect plane flying in their favorite place – Father & son couldn’t be happier. In recent years Kevin learned he had cancer. He knew his time in this world was limited.  He continued to do the things he loved travelling to Maragree as long as he was able. Sadly in December of 2010 Kevin lost his battle with cancer.  During his last few months he shared his final wish with his son Mike.  He asked that his ashes be scattered over the Maragee airstrip from the 1/3 scale J3 Cub, that he loved to watch his son fly.

Early in the spring of 2011 Mike began work on a contraption that would release the ashes from the Cub.  The ashes from a cremation are about 7.5 lbs that’s a lot of weight for a model plane to lift.  Mike found himself looking through various items at a hardware store.  In the plumbing section he found a light weight toilet plungers.  While sitting in the section a store clerk offered to help, Mike explained what he was attempting to design and the store clerk looked at him straight faced and said, “that could work” as if everyday someone buys a plunger to drop cremated ashes from a R/C plane.

Mike joined two of the plungers to form the vessel that would carry his Dad’s remains aloft in the Cub.  Using two servos to open inlet & outlet doors air would spread the remains, the outlet was three time as big as the inlet, air in small hole ashes out the big hole.  Less than ideal weather this spring in Atlantic Canada prevented the testing of the device.  Mike, his sister Cathy and their sposes (Cathy & Mike) made the trip to Maragree to spread the ashes.  During the trip the contraption was held out the car window and tested while traveling at 80 KPH.  .  A mixture of oats and kittylitter seems to make the right consistancy, it worked flawlessly.

Early on Sunday morning (Father’s Day) Mike prepared the Cub for its important flight, he would fly the plane and his sister would activate the servos to release the remains.  When all was ready the engine was started and Mike started to taxi out to the runway.  Many thoughts were going through his mind – would he plane fly with the additional weight, would it be controlable, could he remain in control of the aircraft during such an emotional event?  He throttled up and began the take-off.  The aircraft gained speed, after an extended run it lifted off and slowly began to climb.  It was sluggish, slow to respond and difficult to control.  After a couple of circuts during the up wind pass his sister pushed the button to release the ashes…..nothing happened.  The inlet opened the outlet didn’t.  Mike had to land an overweight aircraft carring his Dad.  With thirty years experience a pro like Mike handled it without incident.  After replacing a stripped servo the Cub took to the air again.  In front of family and friends Cathy pushed the button, Dad was flying in the air above the land he loved so dearly.  After landing the the cub they were surprised to see some of the ashes were still in the vessel.  When visiting Maragree Kevin Whitelaw liked to walk the runway.  Following their Dad’s lead Mike & Cathy walked the length of Maragree airstrip spreading the last of the ashes along the path first walked by their father.

I dedicate this story to Kevin Whitelaw and thank Mike for giving me the opportunity to share it with you.  We all walk our own paths through life, it’s the bond we make with our parents that are strongest. Sharing a passion like model aviation makes the relationship more special.  We can only hope and wish that when the time comes the same respect is shown.  Mike Whitelaw is an amazing modeller and it’s his actions to honor his Father, through the hobby they shared, shows he is a compassionate caring individual.  There are none better, I am sure your Dad would be (is) very proud.