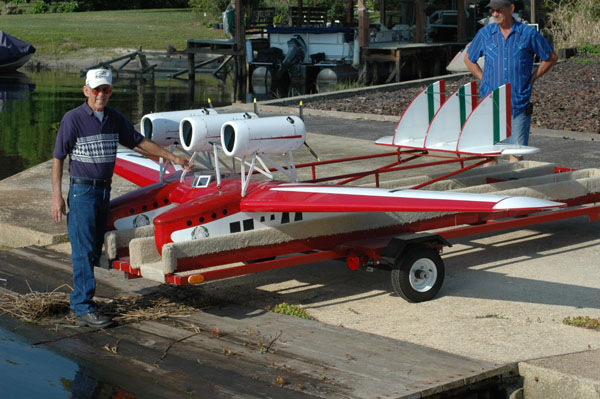 It’s not everyday when you run across a truly amazing RC project, so when we learned about this amazing 18 foot span giant scale Savoia Marchetti S-66 flying boat, were were impressed to say the least. Certified for flight by the AMA this sea-going twin hulled Behemoth is the work of Paul Sage and Mike Breen of Lake Wales, FL. Check out this amazing project powered by three DA-50cc pusher engines and be sure to look for the complete article in the October 2011 issue of Model Airplane News! You’ll be amazed too! 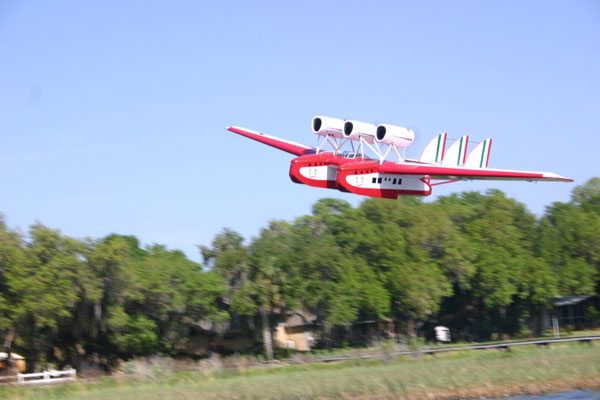 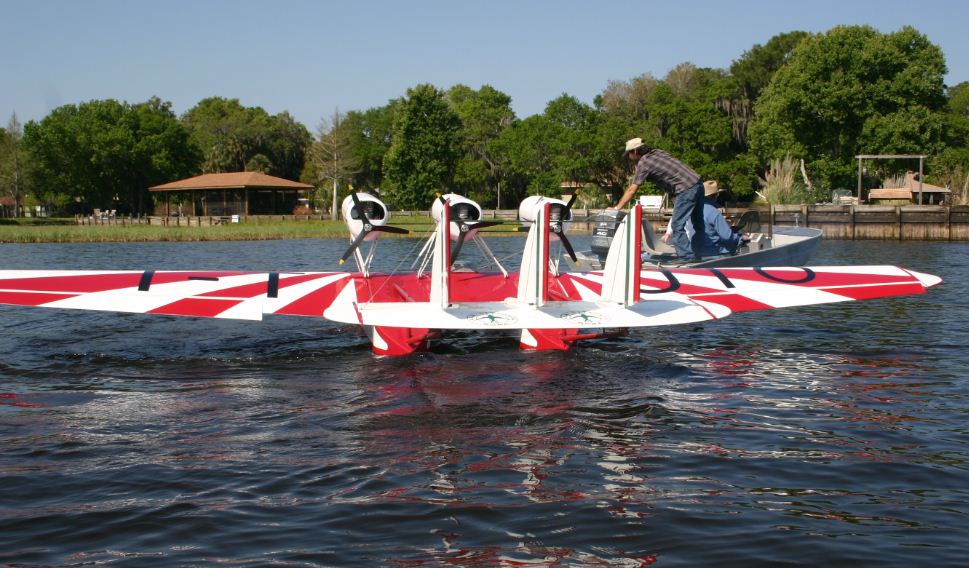 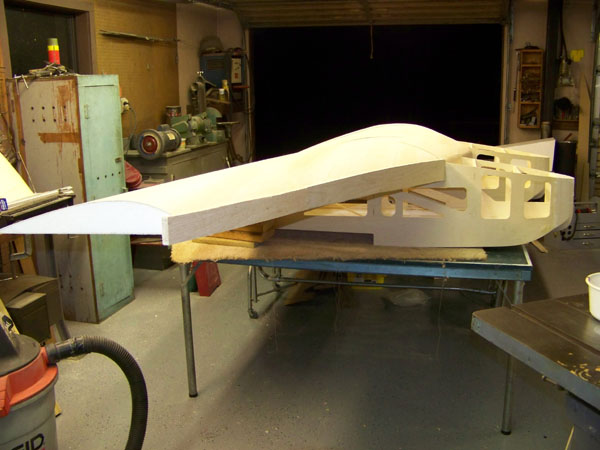 The wing has a foam core that is sheeted with 1/16 balsa. It has a composite cloth spar that is sandwiched between the foam and wing sheeting. The sheeting and spar are attached to the foam with 1 to 1 laminating epoxy. The outer wing panels are attached to the hulls with a 1 – 1/2 in. aluminum tube that extends out into the outer panels about 28”. 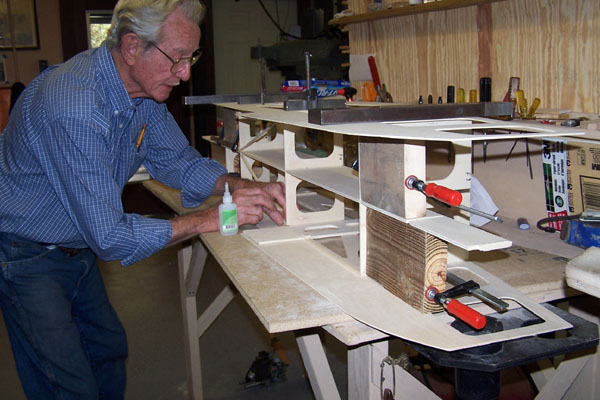 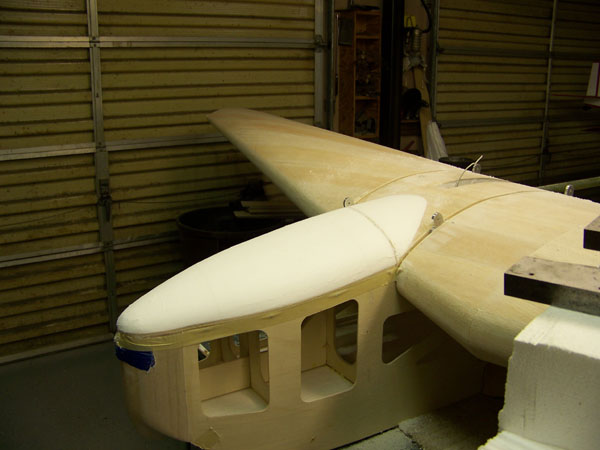 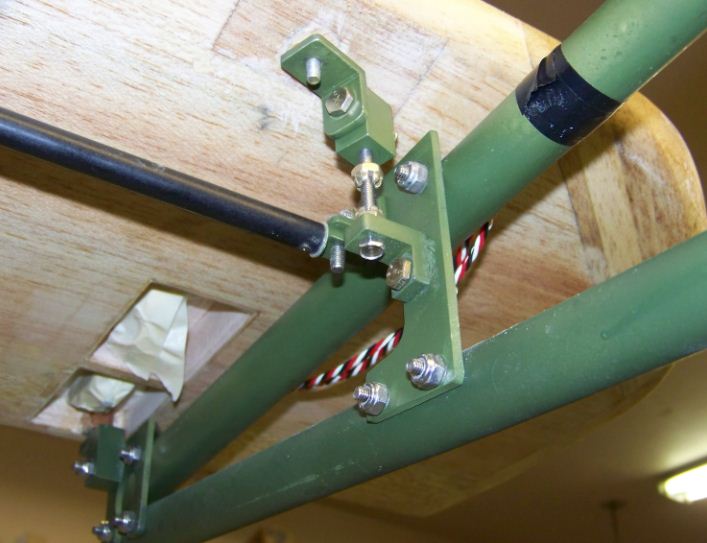 Tail booms are made from 2021 aluminum tubing. The top tube is clamped to the aluminum wing tube with a custom made clamp. Paul Sage did all the metal work on the airplane. The horizontal stab is a Foam core partially sheeted with 1/16 and Capstriped (To save weight.)  Another Unique Feature of the 66’s construction is the Horizontal stabs incidence is adjustable using a jack screw.

Vertical stabs are of built up construction using ½ in. balsa. 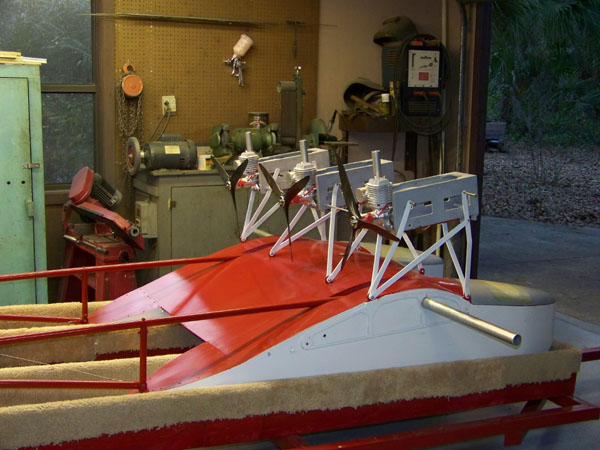 Engine Nacelles are a box built out of 1/4 lite-ply with a Fiberglass cowl hiding the box and the motors. They are tied together with 1/4 Stainless steel rods and attached to the hulls using aluminum struts and aluminum false ribs that are attached to the sides of the hulls. 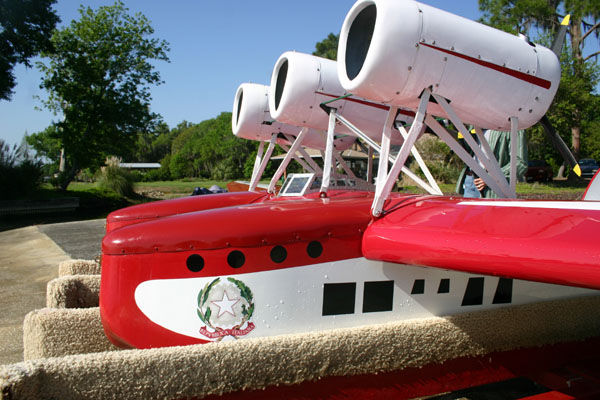 Note: We used reverse rotation engines so that we could run standard props turned around backwards.

Receiver Batteries: SR 6V 5000mAh NiCad Packs (one located in the front of each hull).

* Each throttle servo is plugged into a different slot on the receiver and then electronically mixed together. This allows us to mix the throttles with the rudders so that we can use differential power to steer the plane while taxiing on the water.  This mix is on a switch so that it can be turned off before starting the takeoff run. 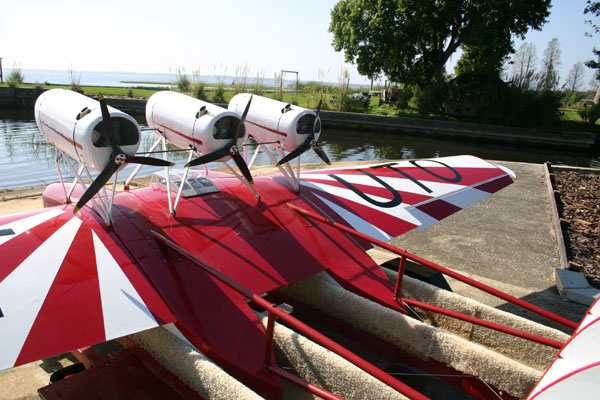 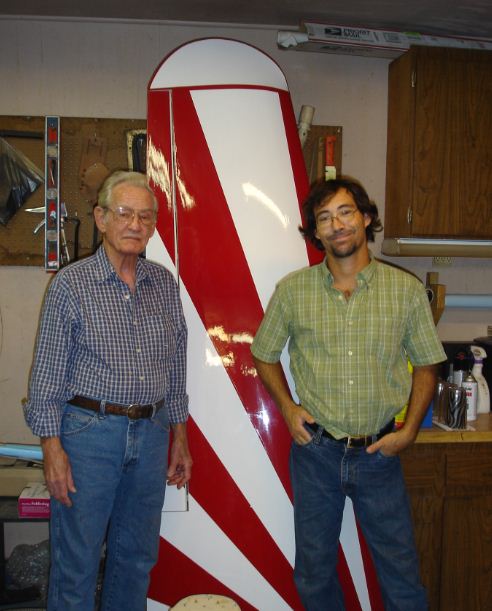 Paul Sage (Left) is a Master Machinist with a lifelong interest in aviation. He started out building rubber band powered free flight (FF) models before getting into full-size aircraft. He has flown everything from a rigid winged hang glider to a Lake Amphibian, and has also built and flew a RV6. His rich knowledge in full size aircraft has added to his abilities in modeling. Paul has been involved with R/C modeling for about 5 years now.  He has amassed quite a history of unique and challenging model projects.

Mike Breen (Right) grew up around model aviation.  His love for the model hobby was passed down by his father, George Breen, who started modeling in the 1940s.  Mike and his father have built and flown everything from Rubber powered models to 37% Extra 300s which Mike used to compete in IMAC with his father as caller.  Mike competed in IMac during the 1990s winning the status of Florida State Champion (1997) in the Advanced Category.  He stopped competing in IMAC in 2000.  At which time, he started competing in Team Scale with his father.  They fly a PT19 that his father built and he flies. “I was lucky enough to get a chance to work in the model industry and worked for Precision aviation digitizing their designs and running their CNC Router. I would like to thank Robert Godfrey and the Godfrey Family for the use of their router to cut the parts out for the 66 project. I also want to thank my mom, dad, and my family for their understanding during this project.” 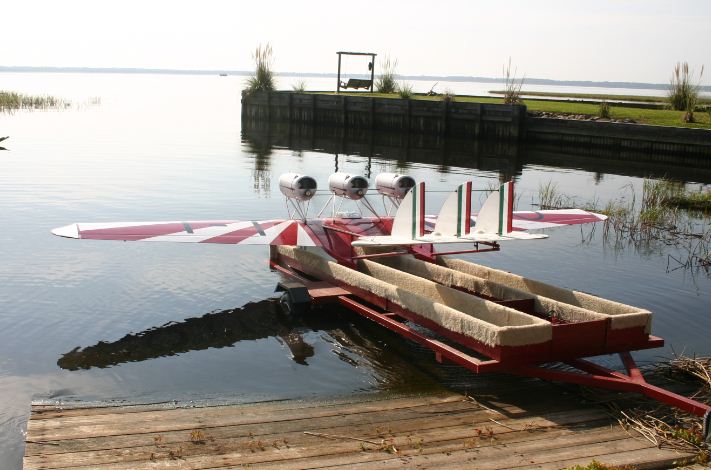 You can build one too!

We will be offering the SM66 plans for sale.  We also do custom one off plans and cut files. If you have a plane that you really want to model, if there are pictures and/or 3views available then we can produce plans or a kit for you in whatever size you like. From a 12″ rubber model to a 20′ Mammoth R/C project we will be glad to help your dreams take flight. 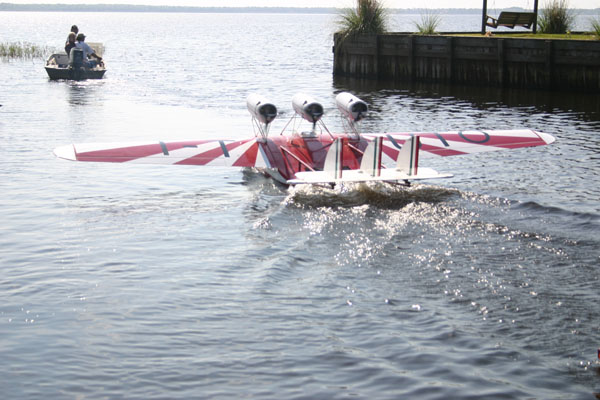 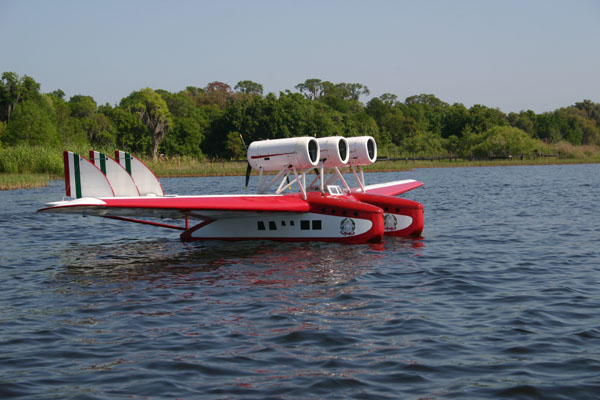