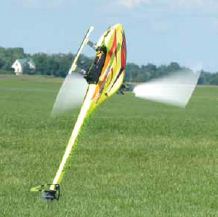 While winding resistance (Rm) is an important consideration in calculating losses, an equally important factor is motor efficiency. Real world efficiencies for electric motors – as measured on a dynamometer – can be all over the map. Some high-quality brushless motors can hit efficiencies in the 90% range, while others may be under 60%. This is particularly true of some very low-cost outrunners. This isn’t to slam the low-cost motors, but only to show that everything – even saving money – comes at a price.
Bear in mind that watts lost to efficiency are shed in the form of heat. And if you’re running
60 or 80 amps in a motor that’s 60% efficient, we’re talking about a lot of heat. Fortunately,
outrunner motors cool themselves fairly efficiently if they have sufficient airflow, but it’s still an issue that needs to be considered. If your motor is too hot to touch after a flight, you might want to look at a better motor.
Large differences in efficiency can really make a difference, particularly at high currents. It’s not just a question of reduced flight time (although this is a consideration). If you’re pumping 40 amps into two motors, one 30% more efficient than the other, the more efficient motor will deliver more watts to the main shaft, resulting in higher head speed. Trying to raise the current enough to offset this loss becomes an exercise in chasing your tail. You raise the current, the motor wastes even more watts and runs even hotter. And all the while, Professor Joule is taking his cut as well. This is the reason that serious heli flyers look for the most efficient motors they can find; whether for smackdown 3D acro or for flying 40-pound scale birds, when performance counts, efficiency matters.

Get the rest of the story on high-voltage helicopters in Jim Ryan’s “Heli Talk” column in the May issue of Electric Flight.