Master model builder and Model Airplane News contributor Ron Peterka, checked in with us recently to bring us up to date on an interesting project. Ron, who recently received his 25 year pin from the San Diego Air & Space Museum and the model shop just finished its most recent assignment of a 12-foot wingspan WW II Boeing B-17G bomber which now hangs on display in the WW II exhibit at the main museum building. 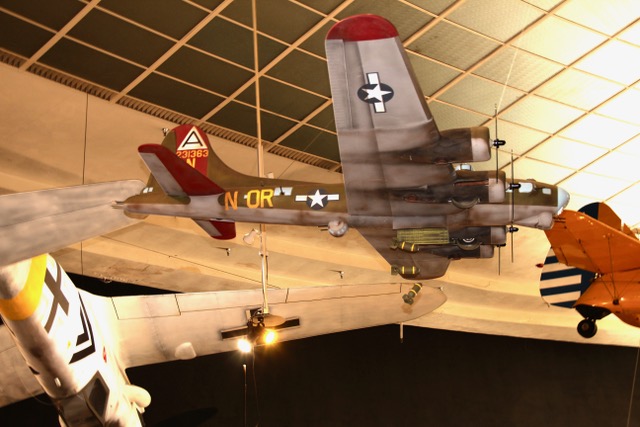 The model was built from Don Smith plans and is about 1:9 scale. A laser cut kit was purchased to reduce the time required for construction since the model shop is only open for about three days a week. Hence, the long build time by the three or four volunteer modelers working on the B-17. Don and the rest of the builders took great pride in modeling the “Outhouse Mouse”, a real life bomber that flew 125 missions over Europe, with 10 missions over Berlin, (shown in red on the mission markings). The model is unusual in that is displayed in-flight with its bomb bay doors open and three 500 lb. bombs being dropped. The completed model weighs 45 pounds and is painted with custom mixed latex house paint thinned with windshield washer fluid.  The custom made aircraft markings are from Callies Graphics. Model Builders are: Ron Peterka, David Weeks, Gayle Boddy & William Simmons. 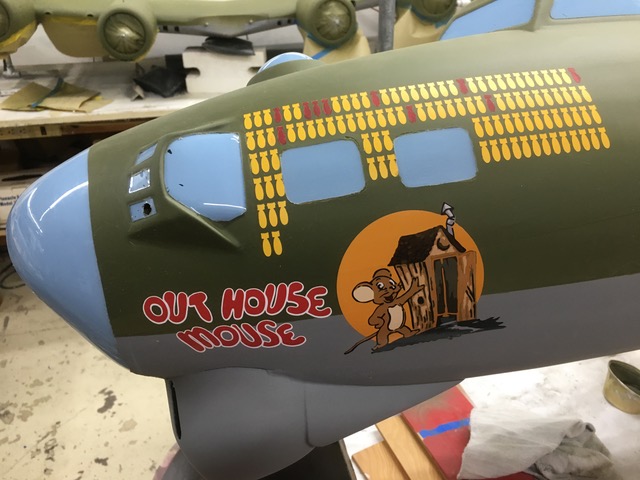 Ron Peterka has volunteered at the San Diego Air & Space Museum’s model shop for more than 20 years and has contributed to a variety of projects at the Museum. His modeling interests have also been applied to almost every form of aircraft modeling since WWII. Ron turned 81 years old this year. The model shop is currently working on a Beech Turbo-prop model of a plane that was flown around the world by former library volunteer Dennis Stewart. At the age of 60, Stewart flew around the world with Robert Weiss in an A36 Beechcraft Bonanza. His story is told in the book, Bonanza Around the World, published by Wind Canyon Publishing, Inc. in 1998. 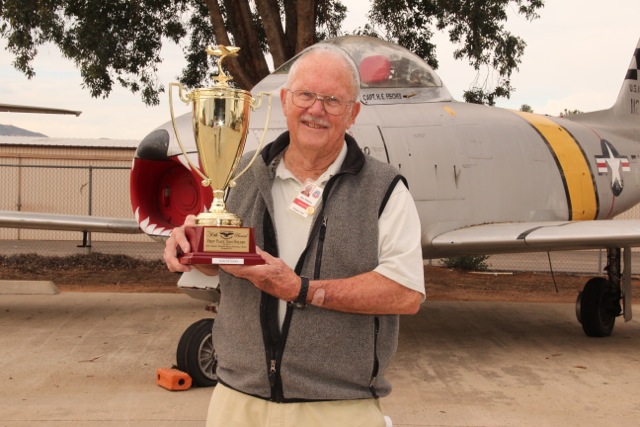 Ron belongs to the U.S. Scalemasters Association (USSMA). This year’s Championships were held at Monaville, Texas, near Houston. Ron’s pilot, Curtis Kitteringham, and he have been competing as a Team for close to 15 years. This year Ron and Curtis won First Place in the Team Scale Class, which came with a huge trophy, which is now displayed at the model shop at the San Diego Air & Space Museum’s Gillespie Field Annex. Ron’s 1:5 scale model of a Stinson SR-5 Reliant and had the second highest static judging score at the contest of 97.25.

The San Diego Air & Space Museum’s Gillespie Field Annex is located at 335 Kenney Street, El Cajon, CA 92020. The Annex is free and open to the public, but donations are welcome. The Annex is open from 9 a.m. to 3:00 p.m. on Monday, Wednesday, Thursday and Friday.