One of the coolest ways to end an aerobatic routine is the Harrier Landing! As 3D flying continues to be popular and its pilots push the aerobatics for more excitement, there continues to be new advanced acrobatic pilots wanting to break into the 3D arena. With this, we thought it would be beneficial to discuss some of the basic 3D moves that other more elaborate sequences can be built upon. As a refresher, 3D flight refers to maneuvers that are flown below the stall speed of the aircraft and typically require nontraditional flight attitudes and control throws. 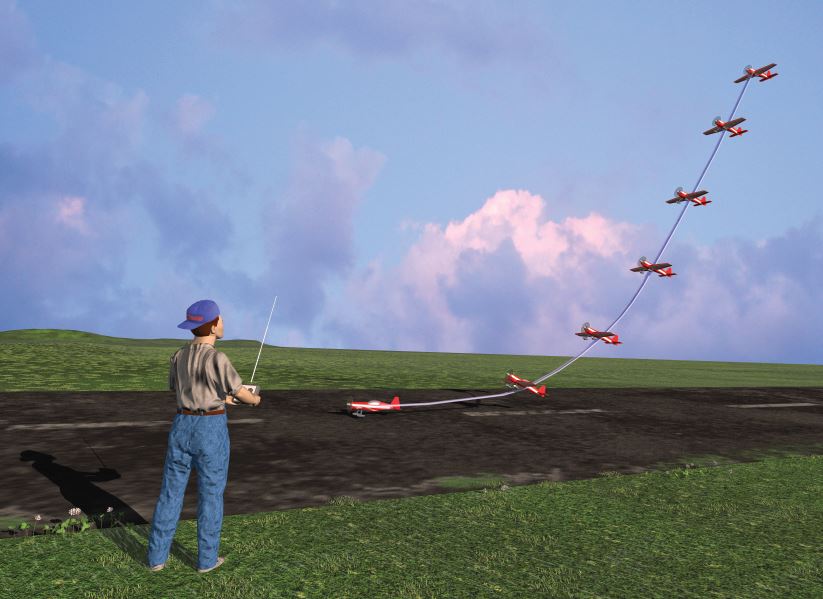 Aside from pilot skill, this type of flying requires rather large control surfaces, a proper CG balance and a fairly high power-to-weight ratio. One of the first maneuvers to be attempted is the traditional upright “Harrier.” This maneuver teaches critical corrective commands while flying at a relatively high angle-of-attack, well below the plane’s stall speed. As an added bonus, we’ll take the basic “Harrier” and combine it with a landing.

You’ll need an aircraft with relatively large control surfaces, (especially for the elevators), that’s also slightly overpowered. These two elements will decrease the pilot’s workload since less corrective inputs will be required. Though some models can exhibit some “wing rock” during the maneuver, it can be dealt by decreasing the amount of elevator deflection. You can also experiment with different throttle settings to balance the airplane’s attitude and airspeed. Also, as you move the CG aft to improve on a specific aircraft’s performance, do so in small increments.

The use of duals, (or triple rates), is also required to explore 3D maneuvers. Set the low-rate settings, to the minimal deflections recommended by the model’s manufacturer. For your 3D-rate settings, use between 30- and 45-degrees of deflection. Exponential is also required to soften the aircraft’s control reactions. Typically, I prefer 65% of exponential included with my 3D-rates.

Fly your aircraft into the wind, parallel to the runway, in upright level flight, at about 400 feet altitude. As the airplane approaches the runway midpoint, gradually decrease throttle and slowly apply full up elevator. Properly done, the model’s angle-of-attack will increase with increase in altitude. The goal is to have the aircraft fly at a very steep attitude while barely moving forward, and maintaining a constant altitude. To maintain the proper attitude, a proper balance of throttle adjustments and elevator inputs must be used along with the required corrective inputs to keep the wings level.

As with all new aerobatic moves, practice the maneuver at a safe altitude. If you lose orientation with your plane, simply neutralize your control inputs, and apply power to recover. Performing the Harrier so it is offset from the runway will help you to observe the aircraft. With time and experience, you’ll be able to perform the harrier at lower and lower altitudes until you can perform it just inches off the ground.

Step 1: In upright level flight, at a fairly high altitude, align the aircraft with the runway flying into the wind. Select your 3D Flight Mode and slowly decrease throttle. As the model’s airspeed decreases, slowly apply up elevator. Once the angle-of-attack changes, apply throttle input, as needed, to prevent a change in altitude.

Step 3: With elevator input increased to the maximum amount, the airplane will be prone to stall and can display an excessive amount of wing rocking. Smooth and constant control corrections will be constantly required.

Step 4: To transition from the “Harrier” back into normal forward flight, slowly decrease elevator input and increase the throttle. Switch back to your Low Rate flight setting and then try the maneuver again!

During the Harrier landing combo, the aircraft needs to maintain a slightly nose-up attitude while descending at relatively steep descent angle. As the model approaches the runway, add some power and slowly release elevator input so the aircraft transitions into normal forward flight just before it touches the ground. Having a smooth response from all control surfaces is an absolute must so start with a minimum of 30-degrees of control deflection on all the control surfaces with at least 50% exponential.

While all airplanes differ in setup and response, programming usually remains the same. Take advantage of your radio’s programming menus to fine tune your aircraft’s response. Make your adjustments in small increments between flights and note the changes in your model’s performance.