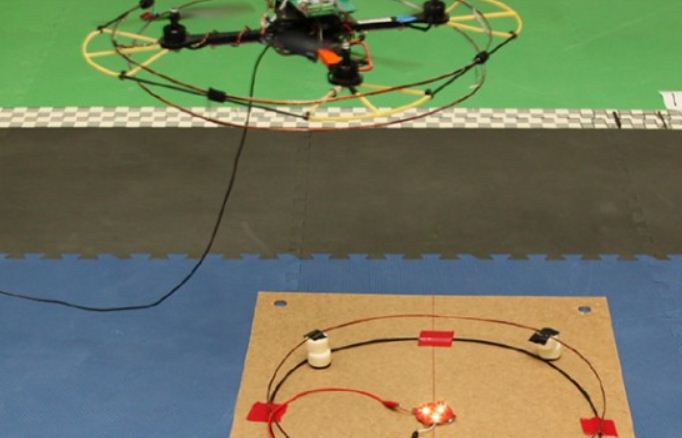 This latest news from Extreme Tech comes from Sebastian Anthony and, if you’ve ever searched desperately for an empty wall socket at an airport, it’s the answer to your prayers! “The University of Nebraska’s NIMBUS Lab has developed unmanned quadcopters that can fly around and wirelessly transmit power to devices. Ostensibly these UAVs have the rather unromantic purpose of recharging remote sensors — weather stations, highway monitoring/messaging systems, and other similar, unattended electronic devices — but it also means that, in the future, you might be able to call out a quadcopter to recharge your mobile phone.

The quadcopters (their creators, Brent Griffin and Carrick Detweiler, call them quadrotors) use strongly coupled magnetic resonance to provide wireless power. The process of transferring energy is very easy — you have two coils of wire that are tuned to resonate at the same frequency, one on the quadcopter and one on the receiving device (pictured below). By running an oscillating current through one of the coils, an oscillating magnetic field is produced — which is picked up by the receiving coil, effectively transferring power.

y the wavelength of the oscillating power — the quadcopter system can transmit 5.5 watts with an efficiency of 35%. This is more efficient than non-resonant inductive coupling (and works over a larger distance), and as an added bonus, magnetic resonance deals well with occlusions and other atmospheric interference (something that laser power transmission cannot surmount). The one problem with strongly coupled magnetic resonance, though — as you can see in the video below — is that the quadcopter needs to be almost perpendicular with the receiving device for power to be transmitted. According to IEEE Spectrum, the NIMBUS Lab team is currently working on ways of autonomously keeping the UAV exactly 20cm directly above the receiving device.

Ultimately, these UAVs will be fully autonomous, constantly whizzing around recharging any and all battery-powered devices, and then returning to base to refuel. A few years from now, AT&T (or Apple) could maintain a fleet of mobile, UAV power stations that automatically recharge any iPhone or iPad that runs low on power. Many medical, implantable devices, such as pacemakers, are currently recharged using magnetic resonance — a trend that will only continue with the advent of truly wearable computers that are implanted beneath your skin. In the future, when most of our organs are augmented with computer tech, we might rely on these UAVs to quite literally keep our batteries topped up while we’re out and about.”