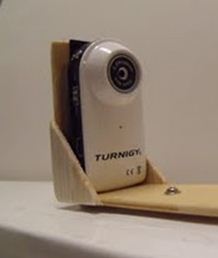 Hi Everyone! I was on the way back from the field today after being chased out by an approaching storm and I got to thinking about the FPV (First Person View) setup on my LT-40. If you go back in the archives of this blog, you’ll find a few of my amateur looking videos taken from the side of my LT-40’s fuselage. I was thinking about how to make a forward facing platform for the camera without making it too complex.

My first idea was to build a right triangle piece that would be glued to the side of the fuselage with some dowels so the flat piece would face forward and… too complicated. My second idea was to create an “L” shape piece, then cut a hole in the front windscreen, slip the piece in, and glue it to the top of the hole and… better than my first idea, but still too complicated.

I liked the “L” shaped cradle idea, and my dad helped me construct one. We then decided to test fit it to the top of the fuselage right behind the wing. I placed the camera in the cradle, turned it on, and recorded a short clip of me waving at it from the front of the plane. I then plugged it into my computer and upon review, the view was pretty decent. There was a little bit of the top of the wing in frame for reference, a little bit of the prop was visible so you can tell which way was straight forward, and it was easy to mount.

My dad then made some triangle braces for the cradle, and we attached it to the fuse with some Velcro and a wood screw. It looks a little rough, but my dad said it reminded him of R2D2 riding in the back of the Starfighter in Star Wars. It isn’t all to aerodynamic, but nothing a few clicks of down trim won’t fix in flight… and when you think of it, bombers in WWII had observation domes poking out on top of the fuse and they flew fine.

Anyway, here are a few pictures. We’ll see how it looks next time I bring the LT-40 out to the field. 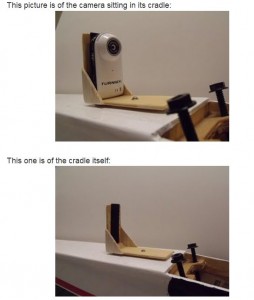 Now I have a question for my viewers. If you recognize the camera in the picture as the one you own, if you could let me know how to set the date/time stamp that would be great. Thanks!