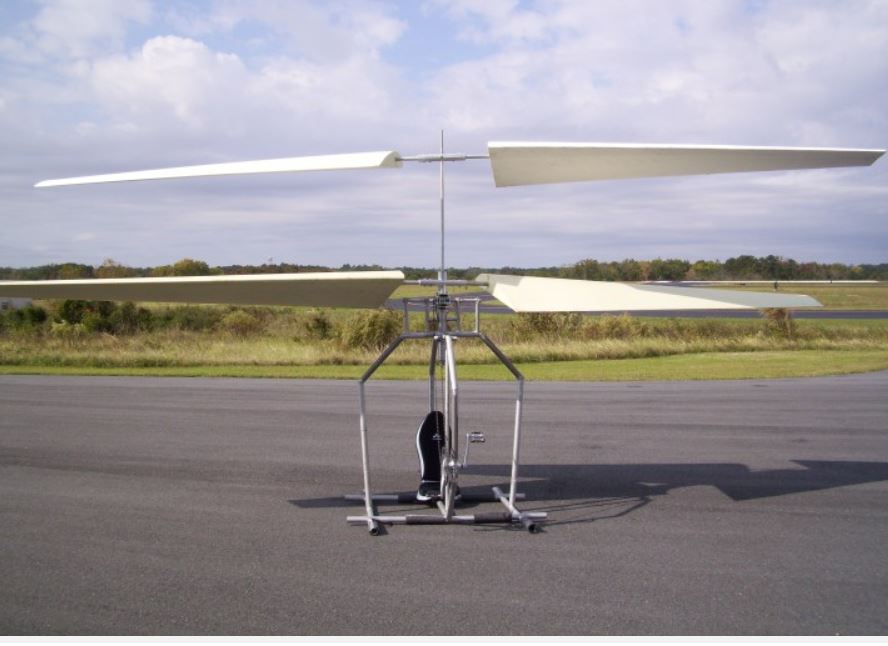 With a frame made of 6061 T6 aluminum, a 1:1 gear ratio and stacked rotors with a carbon0-fiber spar, this 15-pound “micro” helicopter is the latest design competing for the $250,000 Sikorsky Prize! Here’s the scoop from Gizmag: 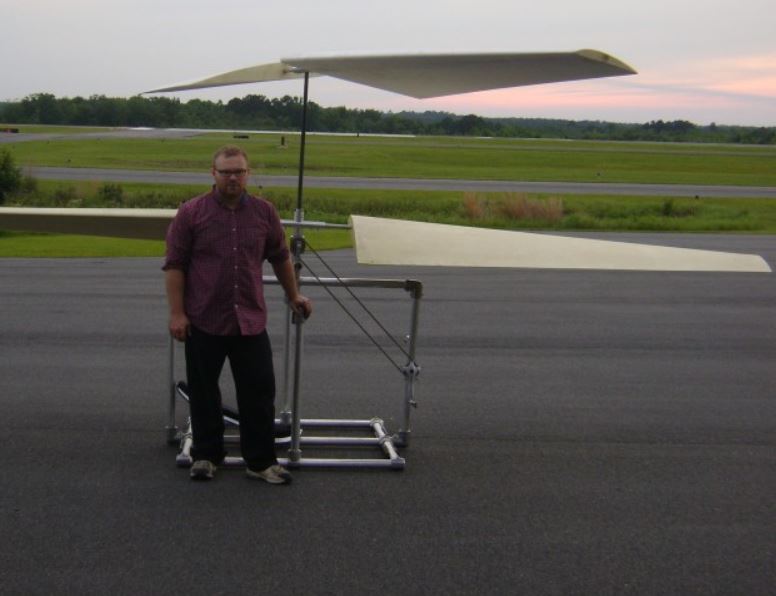 Last September, the Gamera II team from the A. James Clark School of Engineering got so close to claiming the Sikorsky Prize of US$250,000 for human-powered helicopter flight that the American Helicopter Society must surely have been preparing to pull the dust covers off the safe and hand over the cash. Gamera II features a huge cross-shaped frame with enormous rotors at each of its four points, which are powered by sustained hand and foot pumping from a pilot at the center. It’s a design that’s been used by many of those attempting to nab the elusive prize (including AeroVelo’s Atlas), but Georgia’s Kenneth Huff has a rather more compact vision for success.

The project began in the spring of 2010, when Huff stumbled across some information about the Sikorsky competition while researching the building of an engine-powered single-seat helicopter that he was hoping to build after graduating from Middle Georgia State College.

“I am not sure how most people react to the question of human-powered helicopters, but I thought that it would be easy after reading about the competition,” Huff told Gizmag. “I really didn’t know what I was in for and after looking at Da Vinci III and Yuri I, I began to understand the nature of challenge.”

A year later, he enlisted the help of two friends/fellow classmates (Neal Fischer, William Edwards) and requested a US$5,000 development grant from the College to work on a prototype and test the feasibility of building a human-powered helicopter that was much smaller than either Da Vinci III or Yuri I. At this point, the team had not come across the efforts of the University of Maryland’s Gamera team, and AeroVelo hadn’t yet embarked on its Atlas project.

Happily, the research proposal was accepted and work began on the first prototype. The aim was to develop a small coaxial human-powered helicopter that had the potential for reliable and practical recreational use, something that certainly can’t be claimed for Gamera or Atlas. Banking on improvements in rotor efficiency allowing for a substantial reduction in the size of both frames and blades needed for lift, an additional grant in the spring of 2012 (along with a personal cash injection from Huff himself) allowed important design modifications to be made, along with the construction and testing of a new set of rotors.

“The basic premise behind this design is that when the speed of an airfoil doubles, the lift quadruples,” explained Huff. “We knew that we could reduce the area of the rotors by 75 percent when we doubled the speed. Take Yuri I for example, which had eight rotors all rotating at approximately 20 RPMs. If they had been able to double the RPMs to 40, then they could have eliminated six rotors or 75 percent of their rotor area.”

Though rotor testing has produced positive results, the simple aluminum frame topped by a pair of two-bladed rotors has yet to make it into the air. The maximum lift generated so far is 80 pounds (36 kg), while the minimum lift needed to get the craft to fly has been calculated at 240 pounds (109 kg).

“There is much more uncertainty about the feasibility our rotor design because it runs contrary to the design of all other successful human-powered helicopters,” said Huff. “This uncertainty is compounded when coupled with the fact that we have been working on it for two years and have yet to have a successful flight. Furthermore, some aerodynamicists and human-powered helicopter enthusiasts may swear to the impossibility of our design but we believe that there is always room for improvement in any design and truly believe that practical human-powered vertical flight is possible and has the potential to one day be a recreational activity similar to hang-gliding, and we hope to prove it.”