Living history has a shelf life, and the expiration date cannot be extended. I’ve been interviewing WW II veterans since the early 1970s when I got serious about writing history, and it’s been a bittersweet experience. Anyone who’s made a career documenting aviation (or anything else) will tell you the same thing: you make older friends who become almost like family, and you know that you’re going to lose them.

That knowledge does not make the inevitable losses much easier. The rate of attrition among WW II veterans has accelerated immensely of late. Four of my books provided a fairly reliable “howgozit” on the mortality scale.

When Clash of the Carriers was published in 2005, 25% of the contributors were already deceased. In other words, one in four of the Marianas Turkey Shoot participants who survived the war had died in 60 years. It was a typical demographic for that generation. 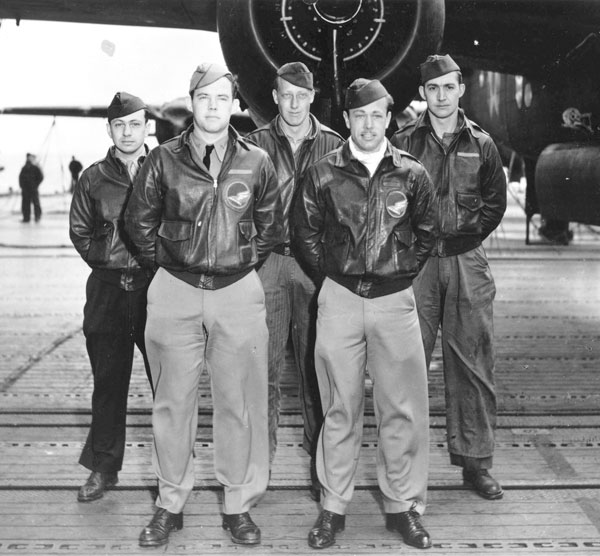 Raider crew for Plane Ten. As a teenager, Flight Journal’s Editor-in-Chief knew pilot Richard Joyce (front, left)
but had no idea he was a Raider, so never interviewed him.

Five years later came Whirlwind, the first one-volume history of all air operations over Japan. It made Amazon.com’s overall top 40 list, but 40% of the veterans I consulted never saw the book. The rate of attrition had increased by nearly two-thirds between 2005 and 2010.

Then in 2012 I published Enterprise, the story of “America’s fightingest ship.” At least 53% of the “Big E” men I had known were deceased by then. For the first time, fewer than half the contributors to one of my books never lived to see the work.

Last year—2014—U.S. Marine Corps Fighter Squadrons of World War II was released by Osprey, my UK publisher. It occurred to me during writing that I no longer knew any WW II flying leathernecks. The last one was Col. Jim Swett, a Medal of Honor ace who died in 2009.

From 25% to 100% losses in nine years.
None of those books could be written today, at least not with the first-person contributions from men who lived the events.

The most recent loss was intensely personal. Cdr. Alexander Vraciu, who became the Navy’s top ace during the Turkey Shoot, was the ranking U.S. ace at the time of his death in January, age 96. Al and Kay practically became a second set of parents from the 1970s on, and I was fortunate to inherit five “Romanian cousins” as well. When Al departed the pattern he left about 82 living American aces of whom only 31 wore Wings of Gold, including four Marines.

When I attended the American Fighter Aces Association reunion three years ago, the median age was 90. In 2013-14 we lost 47 aces; two a month.
Other attrition is no better. We’ve seen the Doolittle Raiders reduced from the 63 who survived the war to three this year.

Of the 133 RAF “Dambusters” who flew the classic 1943 mission, 53 died attacking the Ruhr dams. Three were living last year.

Some units sustained 25% or more casualties throughout a combat tour. But attrition extends far beyond war zones. The Army Air Forces lost some 13,000 personnel just in Stateside training accidents. Postwar attrition continued, and not only from flying. Cols. David Schilling and James Jabara of WW II and Korean fame, respectively, died in automobile accidents. Two 8th Air Force standouts, Duane Beeson and John Godfrey, succumbed to disease at ages 25 and 36. Maj. Gen. Marion Carl, The first Marine ace and a record-setting test pilot, was murdered in his home by a piece of human trash who remains on Oregon’s “death” row 17 years later.

Unfortunately, because we’re aviation oriented, we sometimes forget that vets of all persuasions are leaving us at similar rates. For every ace who passes, we lose tens of thousands of other fliers, GIs and swabbies who helped write the history we have inherited. The shelf life of history is so evident today because the shelves are rapidly emptying as our once-young men reach their expiration date or survive a war to meet another tragic end. The most public of those in recent years was America’s all-time top sniper, SEAL Chris Kyle. He survived four combat tours in Iraq only to be killed by a fellow veteran reportedly suffering from post-traumatic stress.

There’s a philosophical difference among historians regarding the value of long-after interviews. Rick Atkinson, whose impressive works include his landmark trilogy of the U.S. Army in WW II, seldom conducts interviews. He has more confidence in contemporary accounts because they were fresh in the participants’ memories. However, researchers and oral historians who interview veterans believe there’s room for both. So there’s always room for new information, new perspectives. There is, however, no room for procrastination.
Whatever your conclusions, whatever your preferred method of research—even if it’s just sitting with a veteran uncle, one thing becomes absolutely clear with the passage of time: Do it now.
Tomorrow may not come.
By Barrett Tillman