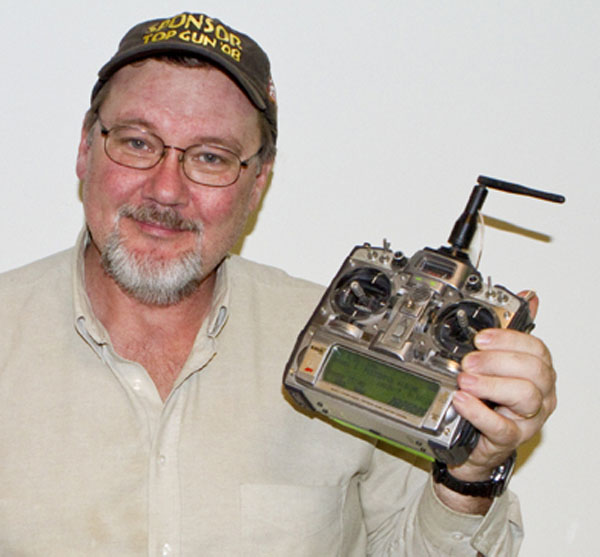 I’m sure you can tell by my white whiskers that I’ve been in RC for a long while. I have seen the radios go from the very simple to what we have today of the programming variety. (Yes, I grew up with B&W TV!) I also have been a loyal JR fan for most of my hobby career. I started with Kraft radios and learned to fly on a Kraft Phil Kraft Signature Series Single Stick radio. After I got home from the military, I started up again with the plain vanilla JR Max 4 and the Max 6 AM rigs. Though I now have the newest 9503 and 12X radios in my collection (and a few modern Futaba FASST and Airtronics 2.4GHz radios as well,) one of my all-time favorites has been the bulletproof JR 10SX II. I have flown many of my scale competition planes with the 10SX and I love its old style touch screen display. The only thing that has ever let me down, has been the transmitter’s battery packs. I fixed this recently and it is such a simple fix I thought I would share. Oh yes, I also converted the 10SX to 2.4GHz along the way and I’ll share my thoughts on this as well.

First, a bit of History

The original JR PCM10 first appeared around 1988 and remained unchanged until the appearance of the “S” version  sometime in late 1992, early ‘93. This introduced the S-type 10 bit encoding system plus three more model memories and three more programmable mixes. The 10S also took care of some minor glitches in the early PCM firmware. The “SX” version continued the trend and there were further software refinements including “multi-point” mix programming. (Variable points on the mixing curve display.) 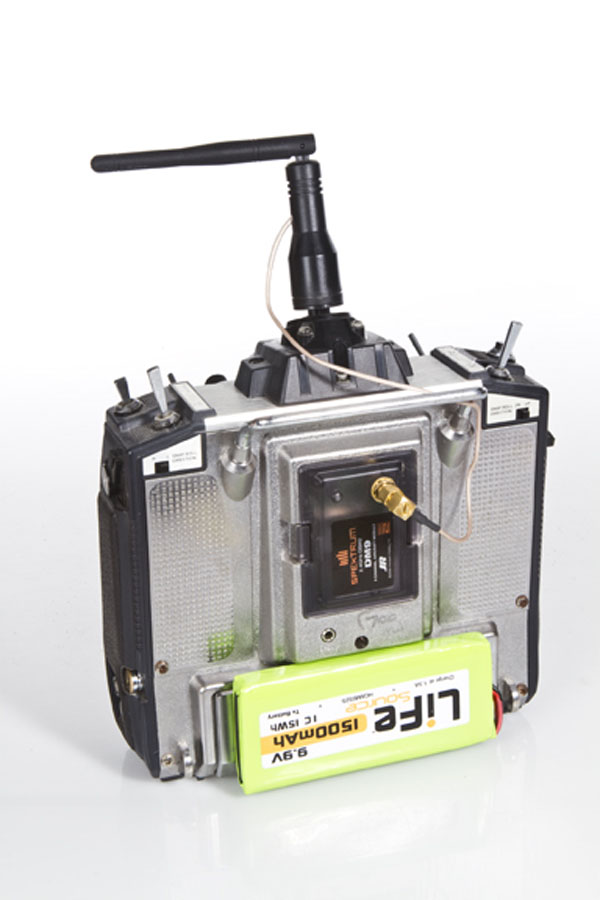 (Above) My newly upgraded JR 10SX II shows off all its changes on its backside.

For its time, the 10SX II had a relatively comfortable weight and feel and for me, it was a great improvement over my overly cumbersome (and square!) Ace MicroPro 8000 AM transmitter. It featured a removable antenna that stowed in an integrated side compartment. The majority of the case was strong aluminum with some plastic dress up parts. The plastic side panels had hard rubber inserts with two auxiliary control levers (one each side,) at the tops. The rear of the case accommodated the plug-in RF module and the battery compartment at the bottom housed a 700mAh Ni-Cd. Just under the RF module was the DSC socket. Also, on the lower right hand panel were the charging socket and an adjustable pot to alter the contrast of the main display screen. 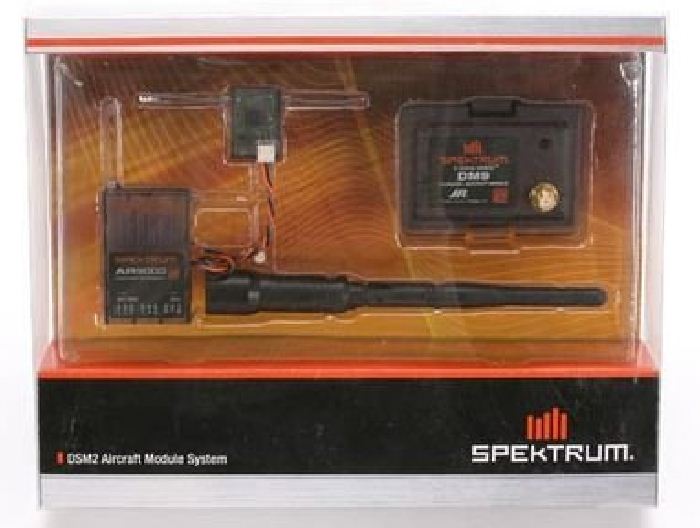 So, for many years, I switched the 10SX II between PPM, ZPCM or SPCM modulation depending on the receiver I was using. Then Spektrum introduced the DX6 and no one looked back. Everybody slowly made the change to 2.4GHz and so did I. But I never got rid of my 10SX. Then Spektrum introduced the DM9 2.4GHz conversion module for JR and I bought one instantly. I stuck it into my good old 10-channel transmitter, switched the modulation to PPM and pressed in the “Bind” button. The transmitter happily found and mated signals with the Spektrum 9-channel AR9000 receiver that came with the RF module. All was right with the world once again! 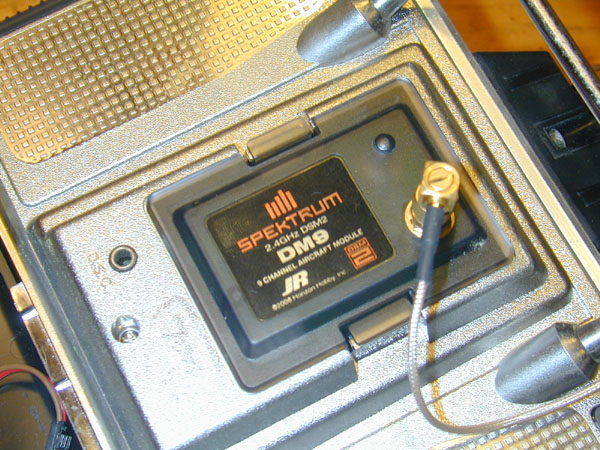 (Above) No tools required.

But that darn battery pack gremlin kept coming back. I cleaned all the wire connectors, replaced the battery pack and made a simple “Double Female” adaptor cable so I could use new 9.6V 8-cell packs. But I just did not trust Ni-Cd packs like I use to.

Enter the new LiFe Source Lithium-Iron Phosphate (LiFe) batteries from Hobbico. LiFe packs are different from LiPo batteries in several ways. Some of the advantages are that LiFe packs are much safer to charge and discharge and the chemisty within the packs is more environmentally friendly than LiPo packs.

LiFe packs have superior thermal and chemical stability over other lithium-ion batteries, and this provides improved safety characteristics over lithium-ion packs with other cathode materials. Lithium Iron Phosphate chemistry also offers a longer cycle life over standard lithium ion cells. Some LiFe packs may have low discharge rates but since discharge rate is expressed as a percentage of battery capacity this can be overcome by using larger packs (more amp-hours.) Some LiFe cells may also have lower voltage and energy density than Li-ion cells this is offset by their slower rate of capacity loss, (longer shelf-life) of LiFe packs when compared with other lithium-ion battery chemistries. With transmitter packs however, current drain is far less an issue.

Nominal voltage is rated at 6.6V so typically LiFeSource packs do not require a regulator to power receiver and servos. Each pack includes one male discharge Lead (Futaba J connector,) and one Balance Charge Lead. For upgrading transmitters, the LiFeSource packs are also available in 9.9V 1500mAh capacity. These fit easily within several Futaba transmitters and other radio brands with similar battery dimensions.

So for my JR 10SX II, I removed the old, questionable Ni-Cd pack and cut a small opening in the side of the battery compartment cover plate. I used a strip of strong, double-sided foam tape and atta
ched the LiFeSource 9.9V pack into place (ontop of the compartment cover,) and fed the wire leads through the opening. It is an easy matter to slide the cover plate (and battery pack) on and off the transmitter case. For charging, I disconnect the battery lead and attach the pack to my LiFe battery charger/balancer (also from Hobbico.) 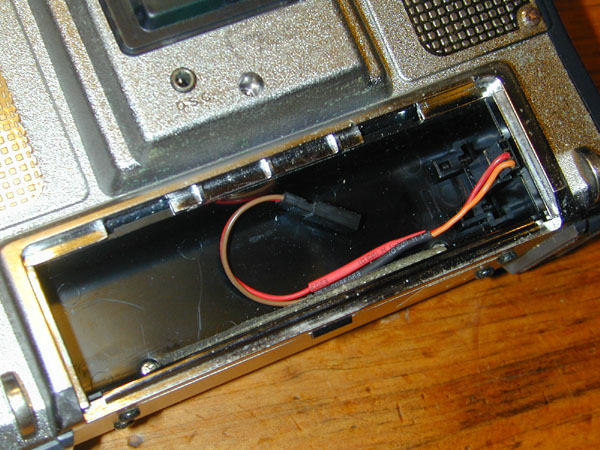 (Above) This is the “double female” adaptor lead I made for battery changes.

So there you have it. Here’s my version of old school upgrading to keep one of my favorite JR transmitters from collecting too much dust. It’s still is my number one “go to” transmitter for my scale airplanes.

Have fun and don’t be in  such arush to get rid of your older radios!