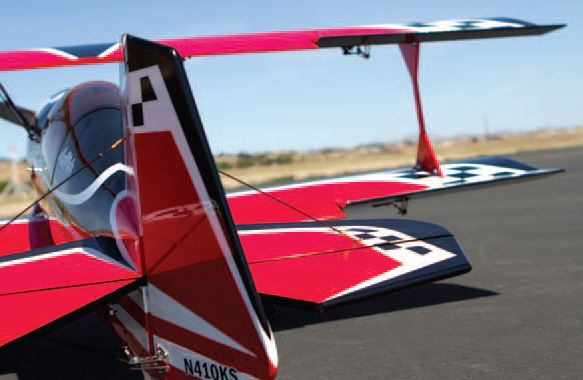 Adverse yaw is an inherent opposite yaw or skid that occurs when aileron are deflected. A positive angle of attack is generally required to produce the wing lift needed to keep an airplane in the air. When the ailerons are deflected at a positive angle of attack, the down aileron presents a wider frontal cross section, thus creating more drag and causing the airplane to yaw in the opposite direction that the ailerons are applied. When two aileron servos and the flaperon function are used, adverse yaw can be lessened by programming a small amount of differential aileron travel, e.g., approximately 5 degrees less down aileron than up, improving control and producing cleaner axial rolls. The exception is when the airplane has a flat bottom wing. Drag on the side of the down aileron and adverse yaw is so much more pronounced with a flat bottom wing that differential aileron travel has little effect. To eliminate adverse yaw, rudder must be coordinated or mixed in the same direction with the aileron. As a rule, a symmetrical wing plane may require only a 3-5% rudder mix with the aileron to eliminate adverse yaw, whereas a flat bottom wing plane requires nearly as much rudder deflection (in degrees) as aileron. Not only does eliminating adverse yaw improve control, pilots who initially learn to fly with aileron/rudder mixing are also able to more easily transition into higher performance symmetrical wing airplanes, since they are already accustomed to flying with minimal adverse yaw. Contrast that to those who learn to fly with adverse yaw, and then have to retrain their flying habits when they switch to a symmetrical wing plane with very little adverse yaw.