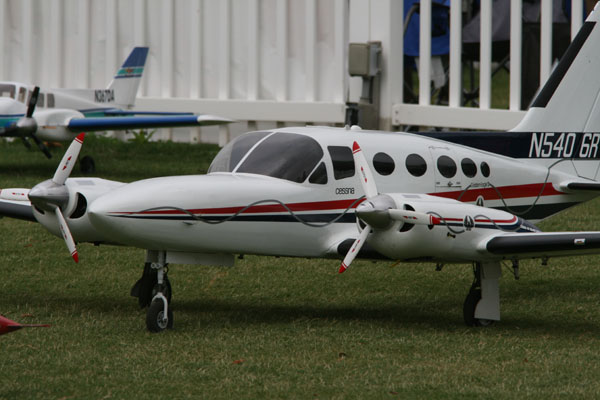 It’s no secret that we often have difficulty accessing the glow plug to start our engines. In scale models, the engine might be tightly enclosed and/or covered by a dummy scale engine, so connecting the glow-driver lead can be a problem. Multi-cylinder engines have two or more glow plugs, so easy glow plug accessibility is even more essential; and in 4-stroke engines with overhead valves, getting power to the glow plug is also a challenge. Adding on-board glow drivers to a multi-engine plane like a Cessna 310 also greatly improves engine performance and reliability.

Many of us have discovered that we can attach a glow-plug-driver extension lead to the plug and use a remote receptacle to ease the task, but the ultimate setup is an onboard, self-contained glow driver. and this guide shows many of them and tells how to install and use them. They make starting even the most difficult-to– reach engines a snap, and they make the procedure safer.

An onboard glow-driver unit requires a control box, a rechargeable battery and a charging jack, an on/off switch, wire leads and a glow– plug cap or connector, some are simply a large– capacity battery and an on/off switch; others are sophisticated, microprocessor-controlled devices that serve other functions in addition to delivering power to the glow-plug element.

Regardless of complexity, however, they all help ensure safe engine starting and reliable performance. Being able to energize the glow plug when the engine is at a low idle (when it is coming in for a landing, for example) greatly decreases the likelihood that the engine will quit when you might need it most-for a go– around or to stretch a short approach. So if these are some of your most annoying problems, suffer no more!

There are two ways to install an onboard glow-driver unit.

Several of the available units have a light or an LED to indicate whether or not the unit has been activated. The indicator should be readily visible so that you’ll know whether your engine is ready to start. Many modelers with scale airplanes install it in the cockpit so that when they’re starting their engines, their assistants can easily see it. Likewise, the drivers’ on/off switch and charging jack should be clearly labeled and easy to reach.

A few systems I have personally used and like! 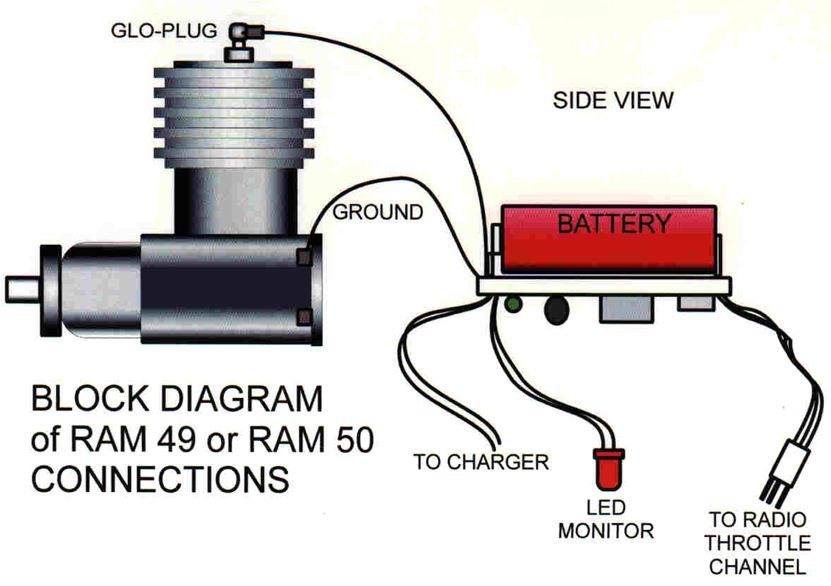 Dependable low speed engine performance and you can also start your engine on the ground with no glow power leads to get caught in the prop. It features a built-in 1300mAh battery to provide more power for .35-size and larger engines. It can be charged with your receiver battery charger. The system has an LED monitor, is reversible, optically coupled and will shut down automatically. A generic receiver plug is attached. 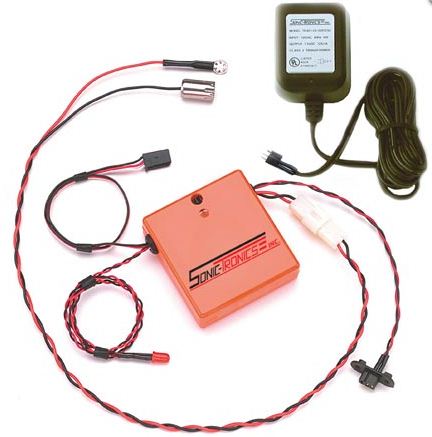 The Super Mcd466 is designed for Single Cylinder Engines on Airplanes, Helicopters, Boats, and Cars for starting and maintaining idle at low throttle. You can parallel the On Board Glow Driver with your throttle servo using a “Y” harness for automatic “ON” operation at low throttle settings (set-point is fully adjustable,) or it may be operated manually through an auxiliary “switched” channel. The external Deans charge jack will allow you to charge the unit overnight using the AC Charger provided. A remote L.E.D. indicator lets you know when the glow plug is turned “ON”. It can be mounted on the instrument panel or any convenient place to monitor the glow plug operation. 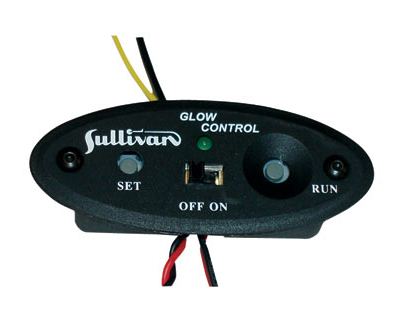 This glow driver features your choice of quick and easy one button set point programming or automatic operation, so the plug received power at any throttle settings. The set point is stored in memory until changed. The green LED light indicates burned out plugs by flashing on the panel. The unit doesn’t require a Y-Harness, just plug to receiver, throttle servo and to any 1.2V to 12V battery. Only weighs 34g.  It ignites the glow plug below a user settable position with quick and easy one-button Set Point programming. Push button override ignites plug regardless of throttle setting. Can be used with nearly all 1.2V to 12V batteries Burned out plug indication by flashing LED on panel. No Y-Harness required. Ready to use – just add a battery Only weighs 34g. Battery connector included 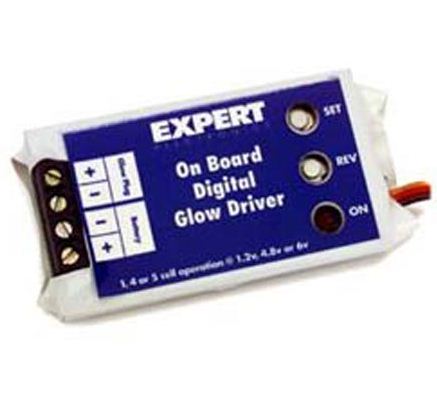 Flame outs – we’ve all had them and we all hate them. Inverted mounted 2 stroke, multi-cylinder and some 4-stroke engines are notorious for flame outs caused by insufficient heat production at idle speeds. Now you have insurance! Introducing Expert’s On-Board Digital Glow Driver. It can be programmed to automatically light the glow plug when the throttle is reduced below a preset position – preventing those low throttle flame outs and improving the low speed idle characteristics. The Expert Digital On-Board Glow Driver features: One Touch set-up, No soldering required, Reverse polarity protection, Automatic ON/OFF via ON/OFF position, Battery packs of 1 (1.2V), Universal connectors, Twin-cylinder compatibility