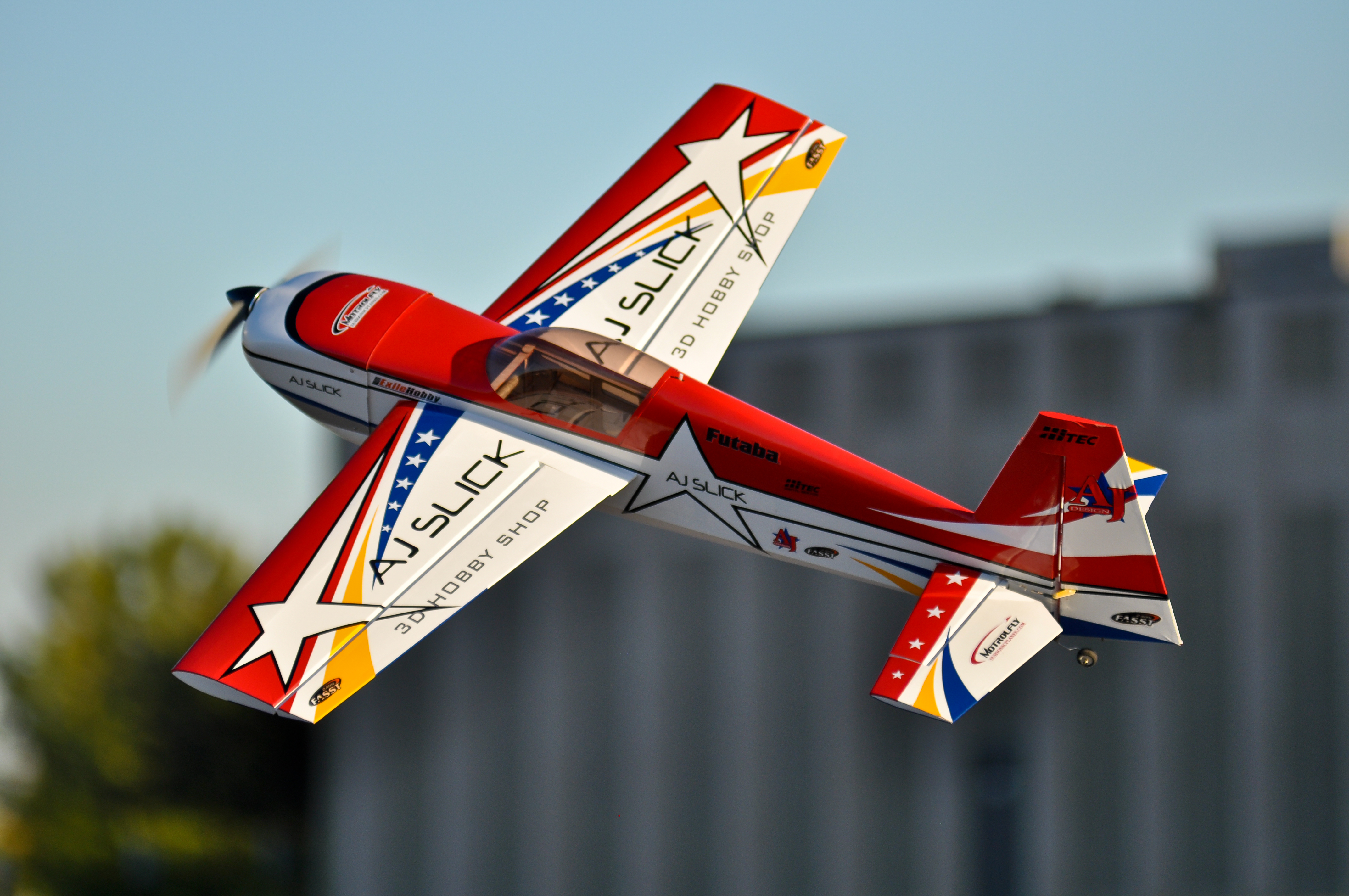 This built-up electric aerobat is a great all-around flyer, and reviewer Alex Schauer writes, “What I really like about the Slick is that I can perform smooth, agile and graceful aerobatics on low rates and very high speeds. Then I can flick it up into high rates and it flips, twists, rolls and rotates every which way!” Check out his full review below:

The popularity of electric aerobatic flight continues to grow all over the world. A few years ago, 3DHobbyShop came out with its stunning new design of the Andrew Jesky 51-inch Slick. This little aerobatic champ seems quite a bit bigger than your typical .40 sized planes. The large and “roomy” fuselage gives it a much larger presence-even in the air. With carbon fiber landing gear and tail wheel strut, “slick” landings are a cakewalk. 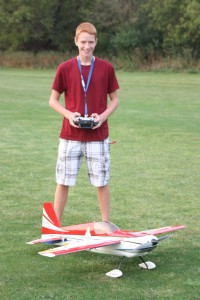 Constructed of balsa and ply, this bird can take the accidental “3 point” on a landing mishap, or “when the wind kinda took it.” The included fiberglass cowl is very nicely made, the trim scheme lines up perfectly and the cowl paint even perfectly matches the genuine UltraCote covering! To top it all off, a pair of wonderful no-blemish fiberglass wheel pants are included also. The very first thing I noticed when I picked the fuselage up out of the box was how light it was! Even with the tail feathers, servos, battery, ESC and motor installed it was still very surprisingly light, but still one of the strongest planes I’ve owned! With the included carbon fiber wing spar, anti rotation pins together with the aluminum thumb bolts for the wings, you can be confident that your wings will stay attached, even in the most violent maneuvers. The large fuselage makes it very convenient for people like me who swap receivers throughout their planes. Adjusting the included pull-pull rudder system is also a breeze.

Unique Features
Definitely the most unique feature of the ARF is the included wing bags! They have cloth and padding in the inside and are coated with a reflective material. Another unique feature of this airplane is the stunningly sharp trim scheme. 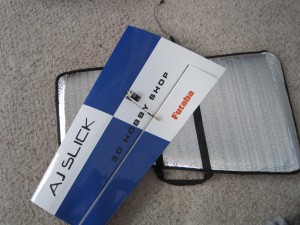 It’s available in an orange and black scheme or the red and white scheme, both look amazing.

The included carbon fiber wing tube mates into a fiberglass recipient tube that consists of three parts (already installed): one going through the fuselage, and one in each wing. My wing tube fit perfectly; it’s just the right diameter for a good snug fit. It was 1/8” too long though, but that was easily fixed with a fine-tooth hacksaw-per 3DHobbyShops excellent recommendation after contacting their customer service. 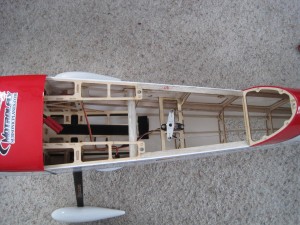 If you use the recommended Hitec HS-85MG servos, which I highly recommend, they are a perfect fit into the pre-cut servo mounting bays. The recommended Du-Bro 672 Hitec Long Super-Strength arms give just the right amount of control surface throw, and in the manual they even recommend which hole on the arm to insert the included ball link control rods. The rudder can also be a push-pull setup using the second rudder servo bay, but that requires you to buy your own linkages and install without any instructions. All of the control surfaces come with CA hinges already glued into the control surface itself, which just leaves you to glue them into the plane. 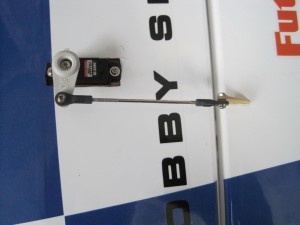 Surprisingly, I did not need to use the drill for this build, though I used a top of the line Motrofly motor which required me to relocate the pre-installed blind nuts, which was very simple. 3DHobbyShop includes many decals for you to apply, and they leave it up to you which ones to put on and where to put them. They even include a few vinyl decals that look very nice. The Slick comes with foam wheels to keep weight down and keep performance up, which easily install with the included wrench on aluminum axles. This plane is extremely forgiving on the center of gravity placement. I slid the battery way to the back of the tray, and way to the front of the tray, and could still easily control the aircraft. It is all personal preference, some people like it more aft and some more forward. 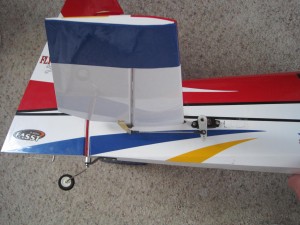 The steerable tail wheel is very nice, although even after applying Loctite per the manual’s recommendation it still came loose! I put one drop of thin CA in the threads, and it has been holding up fine for several flights now. This is definitely one of the easiest assemblies that I’ve done. It is easy to make a mistake, but if you follow the manual that can be printed out on 3DHobbyShop’s website you won’t miss a thing. Always remember, the more precise you build a plane, the more precise it will fly. The way the manual suggests to mount the cowl makes it very easy, and I found that once you have the cowl exactly how you want it, put some tape on it to keep it secure while installing the screws.

Quick Tip
I used the extremely powerful Motrofly motor for this build. It requires you to move the blind nuts. What I did was 1. I soaked the wooden “donuts” that held the blind nuts with debonder. 2, I used a soldering iron and stuck it in the blind nut to heat up the rest of the epoxy or CA that may not have been “debonded”. 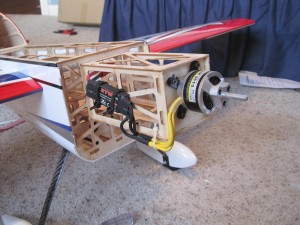 Then, I used a strong knife to pry the donuts off. I then took my X mount and a large drill bit that fit perfectly in the X mount center hole and the firewall center hole to line up the center perfectly. I drilled my holes for the four mounting screws, and glued the blind nuts/wooden donuts in the newly drilled holes. I then installed my motor.

IN THE AIR
When I first saw how low, slow, and steady this thing could knife edge I was stunned, sitting there with my mouth hanging wide open. After my pass, everyone at the field started clapping and asking where I got it/what plane it was. They were also stunned to see how well it handled in the hands of me, a thirteen year old! Everyone kept asking “When are you going to fly the Slick again?”

On my first flight, it needed 2 clicks of rudder trim and 3 clicks of aileron trim. It is definitely one of the most “floaty” planes I’ve flown. It just wanted to stay in the air! (A good thing, right?!) It landed like a trainer, took lots of airspace and came in nice and slow, a nice gentle touchdown on the tarmac was easily acquired. Our club has a 120×70 foot tarmac runway.

Tracking: WOW-this plane is so smooth and agile, and I could swear it flies on rails! When I hit rudder, it TURNS. When I hit ailerons, it ROLLS, no messing around! 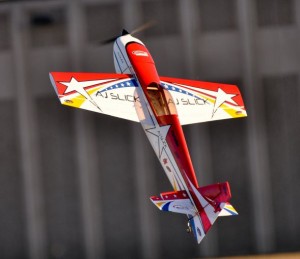 Aerobatics:  On low rates, this is a great all around plane to do mild aerobatics for the relaxing type of flying style. You can even fly it scale-like, scaled to the full-scale Slick 540. I can fly a very fast unlimited vertical at just below ¾ throttle, and I still haven’t had the nerve to try full throttle yet! Now, flip the switch to high rates. This little guy can just go! I would definitely classify it as “violent”! With the large rudder, and the smooth and crisp aileron control, 4 point rolls were a breeze. Rolling harriers are definitely the easiest of all the planes I’ve flown.

Glide and Stall Performance: Typical with aerobatic planes, stalling is at a pretty slow speed.  I actually had a hard time trying to get it to drop a wing! When coming in to land, just get lined up, cut throttle completely, give some up elevator and slowly relax it just as you would a trainer-style plane.

Pilot Debriefing: With the Slick trimmed out, it will fly hands off perfectly straight. What I really like about the Slick is that I can perform smooth, agile and graceful aerobatics on low rates at very high speeds. Then I can flick it up into high rates and it flips and twists and rolls and rotates every which way. Then go back into low rates for near full throttle inverted passes.

Conclusion
The 3DHS 51 Slick will ALWAYS come along with me to the field. It is an excellent all-around plane.  After assembly and setup, the total time was only around nine hours. It was a pretty simple and straightforward assembly in my opinion. I would definitely recommend getting the Motrofly 3615-750 lightened version. With the lightened version, you don’t have to move the blind nuts. All in all, this plane is a great plane for the avid 3D hobbyist or the leisure circle or even scale flyer.