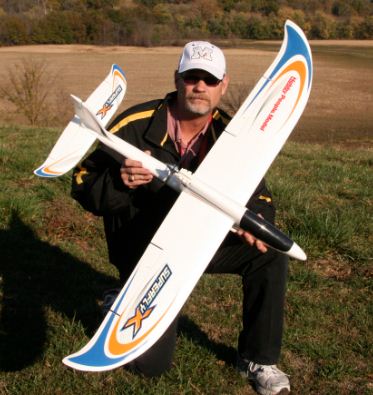 Hobby People’s EPO Superfly X powered glider is all about performance and end user preferences.  The Superfly X comes in three versions: a buildable brushless four-channel kit, a receiver ready brushless four-channel ARF and as a brushed three-channel RTF.  Each version differs with the greatest being between the three-channel brushed RTF that comes with an AM radio and NiMH battery pack while the four-channel brushed versions come with either servos installed/receiver ready or without servos.  All versions come with a two-piece wing, easy access canopy and great flying characteristics. 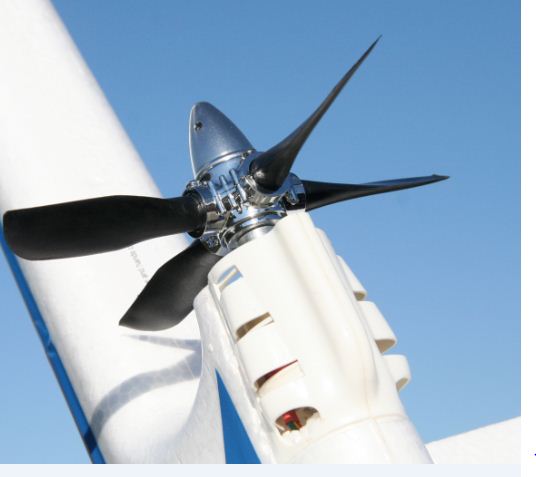 The Superfly X aircraft variants provide just about anyone an opportunity to experience powered gliders.  With support from a trained pilot the time to make the transition to solo flight is short with the Superfly X, and once you get the hang of flying you can really light up the sky with any of the versions. The kit version with a brushless motor installed lets you select your own components that would include four 9 gram servos, 20 amp ESC and a 1000 – 1300 mAh 11.1v LiPo.  Both brushless versions include a four-bladed prop and chrome prop hub. Both the brushed RTF (NiMH) and the brushless (LiPo) receiver ready version include a battery and charger. 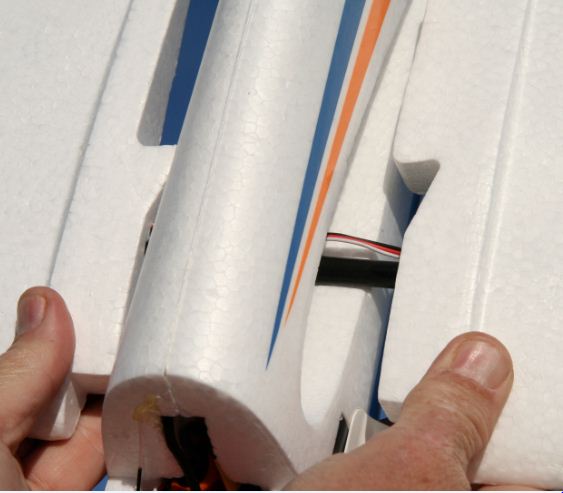 Prices range from $89 for the brushless kit, $129 for the brushed RTF and $199 for the brushless receiver ready version.   Hobby People have designed and produced an excellent opportunity for just about anyone’s powered glider flying needs or for those flyers wanting to expand the planes in their hanger to include this type of aircraft.  This plane is for beginner training pilots through expert skill sets.

Unique features
The Superfly X brings to the RC market place options within a single fuselage and wing design.  With the exception of ailerons only be offered on the RTF versions, the wings, fuselage and tail are the same.  Wings use a long carbon fiber spar that joins the wing halves through and inside the wing saddle.  Care should be taken when slipping the spar into the wing to avoid scaring the servo leads.  The wings interlock and are a snug fit.  The tail for all versions has a very simple installation method.  You simply remove the double stick tape and insert the horizontal control surface onto the fuselage followed by a repeat procedure on the vertical stabilizer.  Once both are in place, you simply seal the seams with foam safe CA. The build will take less than an hour.

All the hinges are molded into the control surfaces and are actuated by 9-gram servos.  The elevator and rudder rather than having their linkages inside the fuselage route them along the outside of the fuselage in a recess that is then covered with a decal.  The linkages are steel and housed in a plastic tube.  The rudder and elevator servos are housed on the outside of the fuselage under the wing with servo covers for concealment and performance.  All control surfaces have a strong control horn clamping mount that secures the horn without any chance of it breaking lose. 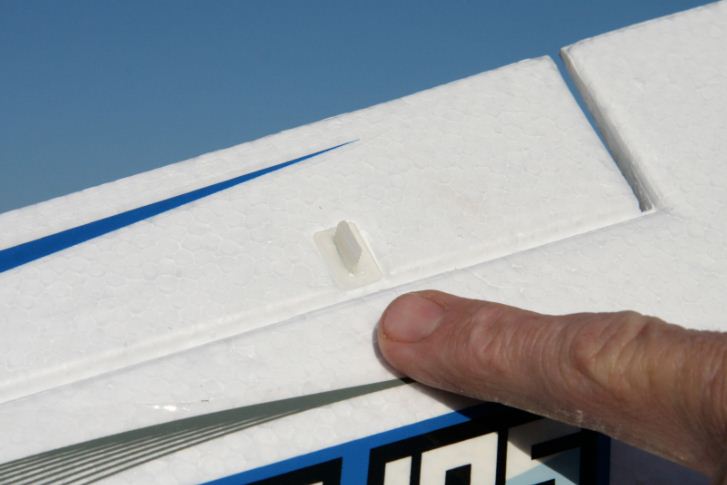 The canopy uses four magnets that are placed on the canopy and four screw heads inserted and glued into the fuselage.  This is a very secure system.   The canopy is also partially lined with foam.  The four-bladed prop comes fully assembled and only requires you to use a 1.5mm hex wrench with some thread-lock to secure the prop.  Keep in mind the prop and hub have a lot to do with the CG as it weighs in at 38 grams.  The shaft of the motor has a flat milling for the hex screw to secure the prop from that side, while a second hex screw secures the opposite side.

The instruction manual is the same for all the versions so you have to sort out what you either need or do not need. With that being said, one has to realize some of the images may not apply to your particular version.  For example, an image in the manual shows the battery in the nose of the Superfly X, but the receiver ready and kit versions might require the battery in the opening under the wing to get the correct CG 3” back of the leading edge and the receiver in the forward compartment.  To place your battery in the rear compartment you will have meet the following measurements: 27mm wide x 33mm tall x 78mm long.

Conclusion
The Superfly X is a simple build that gets you into the air quickly.  From what I could tell even the full kit is a quick build.  Parts are easy to obtain from Hobby People.  All foam parts come without decals so you will have to order a decal set if you want the same appearance.

The Superfly X meets the AMA’s Park Flyer Program by weight and size so it can be taken and flown in many park environments.  The wings are removable for transport and only require you to unplug the servo leads and slip them out of the fuselage.  This is an excellent aircraft across a wide spectrum of user skills. 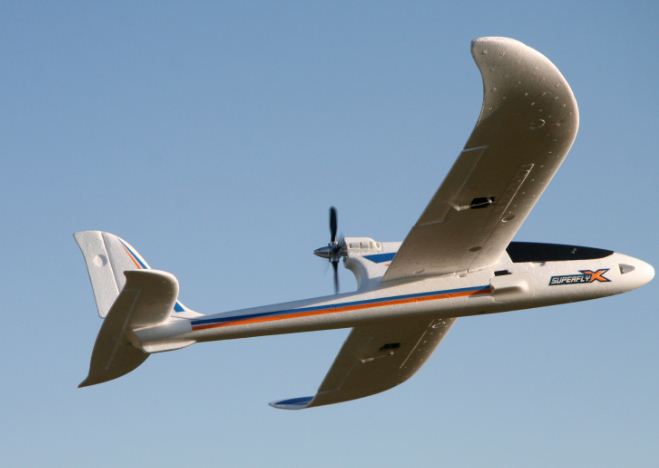 IN THE AIR
Use of a “Y” connector for the ailerons verses differential ailerons should be considered.  If you do use separate leads you have the option of programming in some flaperons that will increase the lift and influence performance.  Without question, mix in the tail with the ailerons and the elevator for the best airborne flight character.  I also mixed the elevator with the throttle to control the nose when I hit the throttle.

A hand launch is required, but be advised the prop is close to the tail boom so make sure you grip the fuselage under the wing and away from the prop.  Climb out is good and totally controllable.  The Superfly X is not influenced by prop torque on launch so you get a straight away flight path that is easy to handle.  There is plenty of power at launch.  Climb outs are steady, but not vertical.

You will quickly come to appreciate just how stable the Superfly X is in the air.  It turns easily with or without the rudder.  Coordinated turns look much better and will keep you in the air longer if you either use the rudder or program a mix.  I made a point to fly in both calm and fairly aggressive winds; neither were a problem.  Wind penetration is excellent and not much in the way of ballooning on the turns. Into a good 15mph breeze the Superfly X will literally hover in place.  Stalls are no issue with a slight wing and nose drop.  Again there is plenty of power to overcome the stall.

I followed the 10mm setup prescription, but also created a dual rate and doubled the control surface movement.  While the specified setup Superfly X performs all aerobatics, the greater movements will give move aerobatic opportunity.  Loops are gentle and can be huge or fairly tight with the 10mm setting, but rolls are lazy as the winglets fight your control inputs to put the Superfly X on its back.  Once over, the inverted flight is very stable.  Overall you have a great aerobatic powered glider.

Landings are like many gliders simply because you have to extend your final approach to get them down on the end of the runway.  The Superfly X is no different with a gentle glide slope and extremely stable landing performance.  Stalls are not an issue and even at very slow flight speeds, the plane will follow your inputs to the runway.  More times than not, I had to push the nose down until I had my turn to final correct.

>Stability – The Supefly X is all about stability in winds well up to and perhaps beyond 15MPH.  This is one of the strengths of the Superfly X.

>Tracking – Those big wings and tail provide plenty of true flight.  The molding produces a perfect symmetry so the outcome is a wonderful flying powered glider

>Aerobatics – As you would expect the Superfly X, can do a full complement of aerobatics at the suggested control surface settings or you can add more.  The 9-gram servos are durable and operate your inputs very well.

>Glide and stall performance – Stalling is something pilots need to know and learn, and the Superfly X is a gentle teacher.  When a wing tip drops recovery is easy.  Even power-on stalls were subtle.  Glide slope is steady, and the airframe can convert wind into lift easily.  Overall this is a good glider and one worth taking up for a flight.

Pilot Debriefing
The Superfly X gives the end user options and that is important.  Whatever options one chooses the outcome will be great performance, durability and quality from Hobby People.  Powered gliders are wonderful teaching planes.  You can use a buddy box or simply hand off the transmitter.  Unlike many airplanes, that require you to never take your eyes away, the gentle, predictable and controllable flight of the Superfly X is special.