ParkZone has been rapidly expanding their lineup of foam sport planes that are scaled
after legendary full-scale aircraft. Its latest offering is a beautiful Extra 300. When the opportunity to review this plane came up, I was more than excited to see what it was all about.

This plane’s frame is made up entirely of molded foam. The foam used is ParkZone’s extremely durable Z-Foam. Everything arrives prepainted and ready for flight right out of the box.

Also included with your new plane is everything you need to get it in the air except your DSM2 transmitter. This included the prop, spinner, landing gear, wheels, wheel pants, all servos, AR500 receiver, 3S 2200mAh battery and battery charger. Top all this off with a clear and concise instruction manual and you have everything you need to get your plane set up and ready to go in no time.

The ParkZone Extra 300 is a great model. It is, however, an aerobatic plane by design. Add this fact to its smaller, more agile size and you have a plane that I would recommend for the intermediate pilot. If you have experience with low-wing planes, you should have no problem getting comfortable with this little beauty.

All surface are prehinged from the factory. ParkZone actually molds the hinges into the Z-Foam. I also noticed on the ailerons that there are two round, pin-style hinges placed at the root and the tip to help fight separation of the foam hinge line. This is a great feature that will definitely add to the longevity of your model. The prehinging of all surfaces really speeds up the build and assures that your plane is hinged properly.

The first step in preparing (that’s right, you really can’t call this “building”) your model for flight is installing the landing gear. The gear legs come preassembled with the wheels and wheel pants already installed. All you have to do is slide the piano wire gear into the mount on the bottom of the fuse and it locks itself in place. Next, just click the landing gear fairings in place and you’re done with the landing gear. The tailwheel is preinstalled and connected for you by the factory.

There are several ABS and Lexan pieces included with the ParkZone Extra 300. These include the cowl, wheel pants, landing gear fairings, and canopy. All of these parts are 100% preinstalled. There is absolutely no finish work to be done on any of the above. This really makes assembling this model very simple and quick.

All of the included hardware is metric and, of course, preinstalled. The wing is two-piece and supported by a carbon-fiber wing tube. The wings are held on with a single Philips-head screw. All that is left for you to do is to slide the wings on, connect the servo leads and put the two screws in place to secure the wing panels. The only other piece that needs any assembly is the horizontal stabilizer. This piece is slid into place and secured by the included clear tape. Once this is done, you simply connect the control horn to the clevis and you’re ready to fly!

As with everything else, the motor/power system is all preinstalled for you. Even the prop and spinner arrive preinstalled and ready to fly.

The ParkZone Extra 300 BNF is a great sport-scale addition to the ParkZone lineup. With its scale lines, quick building, and great flight performance, it will surely be one of your favorites in no time.

The wheels included with the Extra 300 are fairly small and you’ll want to keep the flying surface you use somewhat smooth. Don’t worry too much about flying this plane off well-manicured grass like you would find in a neighborhood park. The Extra 300 does carry itself a ways in a glide but with a little practice, you can fly this plane from pretty much anywhere. The smallest field I have flown this plane from had about a 75-foot runway. The first couple approaches were kind of nerve-racking, but after a couple landings, it didn’t bother me at all. On the ground, the Extra handles very well. When taking off, just advance the throttle steadily and you’ll be airborne before you know it. I didn’t experience any bad habits such as ground loops or swerving like some tail draggers tend to do.

Stability: The Extra 300 is a very stable platform by design. The ParkZone version is incredibly stable at high speed and goes where you point it. At slow speed, the ParkZone Extra remains very controllable and showed no bad habits. This is true both upright and inverted. I had a lot of fun testing this plane in all attitudes and it’s very impressive.

Tracking: Being an aerobatic plane, the Extra 300 tracks very well. It goes exactly where you point it. Tracking through loops and rolls is also very true. One thing I noticed on the first flight is its tracking in a vertical upline. I pulled the nose straight up and performed several aileron rolls. The plane held its heading and the rolls were very axial.

Aerobatics: Aerobatics is where this plane shines. Loops, rolls, snap rolls, spins, knife- edge flight, and so many more are easily performed. I was especially impressed with the knife-edge handling. Even with no mixes in the radio, I was able to perform full deflection, hi alpha, knife edge passes only inches above the runway. This is incredible for such a small foam model.

Glide and stall performance: The glide performance of this plane is very good. It carries its speed well and does not seem to want to fall out of the sky. Being a small plane, it was no surprise that the stall is noticeable. Once the plane reaches stall speed, it tends to drop a wing as the nose drops. There was no indication of a spin or snap and once the nose dropped and airspeed was regained the plane flies out with no problems. On landing the plane settles in nicely and touches down in the 3-point position every time.

Pilot Debriefing: The ParkZone Extra 300 BNF is a great-performing model. It has plenty of power to perform the full range of aerobatics and is designed to perform these aerobatics effortlessly. ParkZone did a great job with this model. I have experienced hours of fun with it already and know you will too!

§ Impressive looks that will draw heads at any field 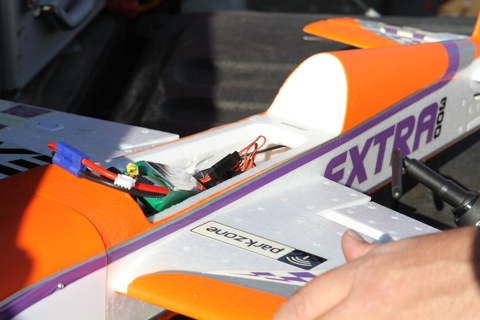 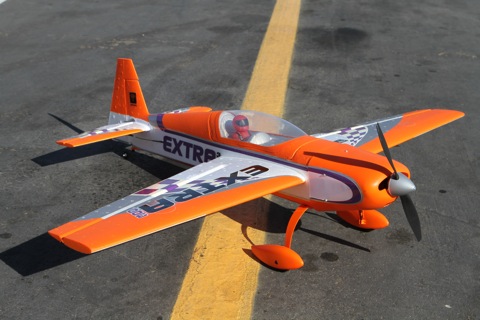 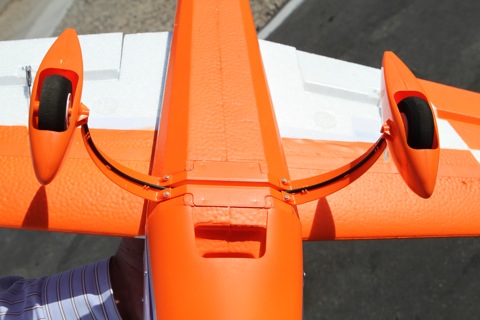 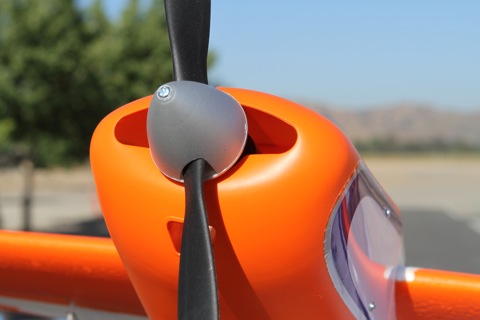 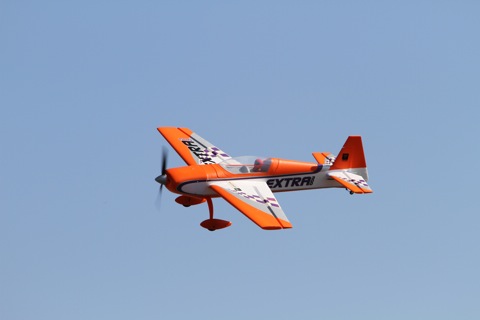 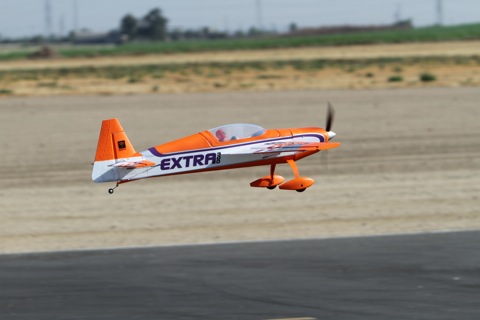