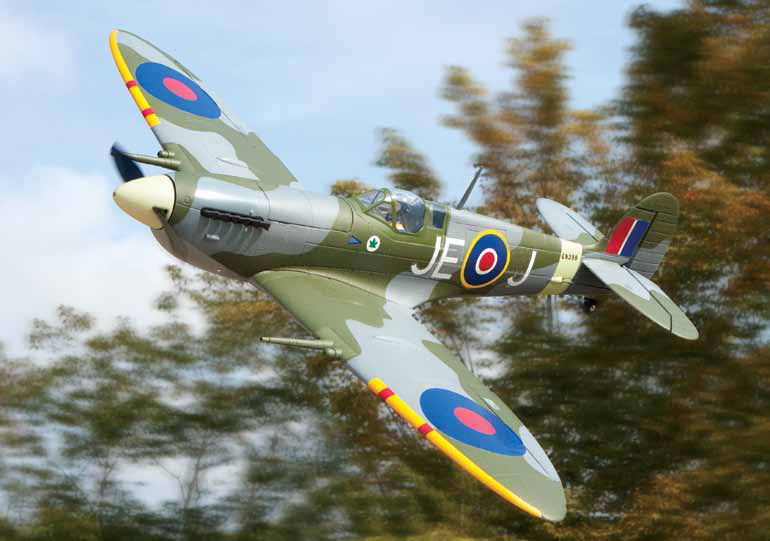 Here is an excerpt of a great review of the ParkZone Spitfire Mk. IX that is going to be in the January 2012 issue of Electric Flight magazine. Used by several air forces in secondary roles up into the 1950s, the Supermarine Spitfire is forever linked to the Battle of Britain and is considered by many as the iconic fighter of WW II British aircraft. Designed as a short-range, high-performance interceptor, this beautifully styled, single-seat fighter was used by the Royal Air Force and many other Allied countries during the war and several variants were developed and identified with mark numbers. The latest fighter to enter service in the ParkZone squadron, this Spitfire is a Mk. IX. Like all the other warbirds from ParkZone, it is beautifully painted and detailed. Featuring durable molded Z-Foam construction, the Spitfire comes out of the box in the classic green and gray camouflage of the era and it is nicely appointed with many scale details.

The Spitfire is available as a Bind-N-Fly, version as well as a Plug-N-Play (PNP) where you supply your own receiver. This plane is the (BNF) version and I bound it to my Spektrum DX8 transmitter for this review. Both versions come with a Spektrum AR600 DSM2/DSMX receiver and four servos installed, as do the 15-sized 950Kv BL outrunner motor and E-flite 30A Pro speed control. A Parkzone 3S 2200mAh 25C LiPo battery and a 2- to 3-cell DC variable rate charger are also included. Scale accessories include molded plastic 20mm wing cannon, scale engine exhaust stacks

With a fully charged battery pack, the model becomes airborne effortlessly with a fairly short takeoff run. The gear is placed forward enough, (depending on the condition of your runway) that there are no nose-over tendencies. My flying field was freshly mowed and the Spitfire blasted off without a care. Initial climb rate is impressive. Almost no trim changes were required and the balance point was spot on with the included battery pack in place.

Nothing will make you feel like a real WW II fighter ace than a Spitfire and this impressive warbird from ParkZone has all the feel and slick looks of the real thing. It has plenty of power and the markings give it the scale realistic appearance for which all ParkZone warbirds are known. If you have a friend with a ParkZone Messerschmitt Bf 109, then you have a match made in heaven. Go ahead and have at it! Just remember to watch your six!

To see the complete review on this Great little Spitfire check out the January issue of Electric Flight.