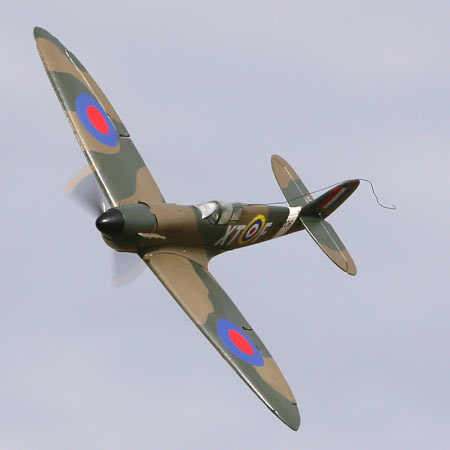 Folklore calls it the “fighter that saved a nation” during the Battle of Britain, and pilots all over the world remember the Spitfire Mk IIB as the most effective and famous aircraft of WWII. The renowned fighter flew with various air forces, including the United States Air Force, during WWII and for years after. Now you can experience the thrill of flying the legendary Spitfire on a smaller scale with this fully aerobatic Charge-and-Fly reproduction from ParkZone. And getting it airborne is about as simple as it gets. Just attach the wing and tail, connect the battery to the charger and in as little as 40 minutes, you will be flying.

The ZX10 radio system and ESC and two 3-wire servos can be removed and used in other speed 370 or 400-class electric aircraft. That includes V-tails and delta wings, thanks to optional servo reversing and T-tail/V-tail options. You can also adjust the speed control’s auto-cutoff to work with 3-cell Li-Po battery packs. And, with minor modification, you can engage in exciting aerial combat using the X-Port adapter that’s included.

As with every ParkZone product, the Spitfire comes equipped with everything necessary to get you in the air quickly and easily, including a fully proportional 3-channel FM radio system, batteries for the transmitter; a rechargeable Ni-MH battery pack; and a variable rate DC peak charger.

Charge-and-Fly convenience, outstanding flight performance and exciting scale realism—with the Spitfire Mk IIB RTF, you get it all.