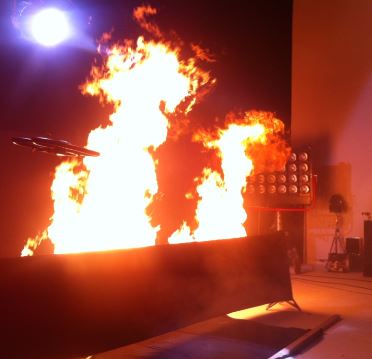 The Parrot AR.Drone was one of the first “toy” quadcopters available, and with its “fly by iPhone” capability it brought the fun and excitement of “RC” to everyone. Now the latest version, 2.0, has starred in an action movie, “Built for the Elements.” I enjoyed the behind-the scenes film even more than the main attraction, and you can view both below.

From the Parrot AR.Drone website:  To make such precise images, Parrot used a high-speed HD Phantom Flex camera. By filming in 1,200 frames per second in 1920X1080 resolution. Filmed in four days in a 500m² studio near Paris, this one-minute movie required more than four months of preparation!

For the Parrot AR.Drone 2.0, this movie was a great experience, “Cinema is a family story. My brother, Parrot AR.Drone, appeared in several roles on movies and shows like the ‘Smurfs’ and ‘Modern Family’. With this project, I wanted to show what I can do, thanks to my creators and all who encouraged me since the beginning. I think the result is here.”

As a pro, the Parrot AR.Drone 2.0 completed all of its own stunts, with no understudy.

Parrot confirmed that no AR.Drone 2.0 were harmed during the filming.

‘Built for the elements’ by the numbers:

Here’s the behind-the-scenes action of the film:

Watch the “Built for the Elements” movie short here: