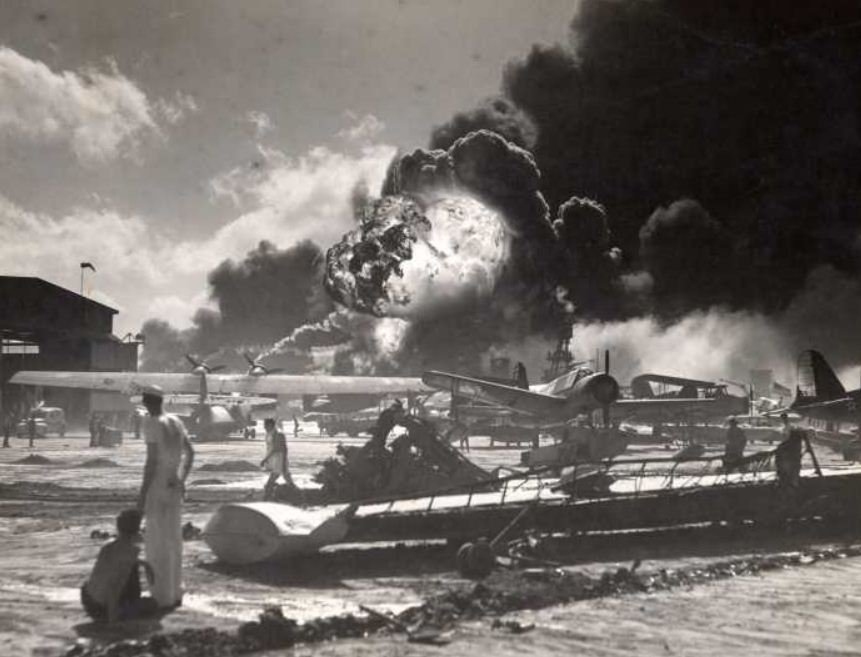 We recently learned of the U.S. Navy’s plan to cover Ford Runway with solar panels and surround it with a 7-foot-high-fence. Please read the position paper from the indepently operated Pacific Aviation Museum at Pearl Harbor and, if you agree with us, I hope you’ll add your voice to the outcry by signing the petition here.

Ford Island is the only aviation battlefield in America.  It was attacked on December 7, 1941 by the Imperial Japanese Navy forces, an act that brought America into World War II.  The Ford Island Runway and the iconic red & white Control Tower, as seen in the movie Pearl Harbor, survived that date which lives in infamy, and was designated as National Historic Landmarks in 1964.  The National Trust for Historic Preservation named Ford Island one of 11 “Most Endangered Historic Places” in 2001. The US Navy now wants to cover the 300 foot x 4,000 foot runway with 60,000 black photo voltaic panels and surround this historic space with a 7 foot fence.  Established in 1919 as the Army’s Luke Field, this was one of the first military air fields, it is where Amelia Earhart made first attempt at flying around the world in 1937, and it is where American’s died on December 7th. This is hallowed ground. Pacific Aviation Museum Pearl Harbor has asked the Navy to put the project further west off Ford Island in order to preserve this scared and sacred space.  The Navy is moving forward with their project, ignoring the historic nature of Ford Island.  Help preserve this American Battlefield with your vote to stop this atrocity.  Tell the Navy to put the panels on ground that isn’t stained by the blood of Americans.   -Ken DeHoff

Ford Island, in the heart of Pearl Harbor, is a site that many have likened to Gettysburg, Valley Forge, and the Alamo.  The 4,000’ runway, part of Naval Air Station Ford Island from 1921 to 1961, has long been on the National Register of Historic Places.

The U.S. Navy is now proposing to cover the runway and adjoining land (a total of 28 acres) with 60,000 photovoltaic panels in a move that will permanently convert the nature and appearance of this hallowed ground to an industrial project.  In addition to the panels, the project will require numerous “inverter stations” between the former runway and ramp area and the entire photovoltaic panel area will be surrounded by a black chain-link fence.

The 2007 National Defense Authorization Act requires the U.S. Navy to obtain 25% of its electric power from renewable sources by 2025.  After receiving 13 responses to undertake $500 million worth of solar power systems in Hawaii, three companies were selected (Photon Finance LLC, Island Pacific Energy LLC, and Pacific Energy Solutions LLC).  The Navy is in the process of issuing “task orders” to design, construct, own, operate, and maintain the solar power systems; Task Order #2 has apparently been issued for Ford Island.  No public hearing has been held nor, apparently, is any contemplated before construction commences.

On December 7, 2006, Pacific Aviation Museum opened in the first of three hangars which survived the attack on Pearl Harbor; to date the museum has welcomed more than 800,000 visitors.  The museum’s mission is to educate young and old alike, honor aviators and their support personnel who defended freedom in the Pacific region, and preserve Pacific region aviation artifacts.  The museum feels that the Ford Island runway is one such artifact.

At its meeting on July 19, 2012, PAM’s Board of Directors voted unanimously to oppose the Navy’s plans to cover the runway and adjoining land with photovoltaic cells.  This decision was not taken lightly in view of the fact that the U.S. Navy is PAM’s landlord.  In communicating its position to the Navy, the museum stated “the size and prominence of this project would violate this hallowed ground….while we are in total support of developing renewable energy sources and making “green power” available, we encourage the Navy to find another location for such a project that does not have a negative impact on the rich history of the current proposed site.”  The museum has encouraged the Navy to accelerate preferable sites on far larger tracts of Navy land at Waipio Peninsula and/or the Pearl Harbor West Loch blast zone.

In summary, Pacific Aviation  Museum is currently the lone voice in opposition to this initiative.  This project is not at all in keeping with the significance of the historic Pearl Harbor battlefield.  We ask the reader to consider the hue and cry should a 60,000 panel photovoltaic project be located at Gettysburg or Valley Forge.

This position paper was prepared by and reflects views of Pacific Aviation Museum Pearl Harbor.        August 10, 2012