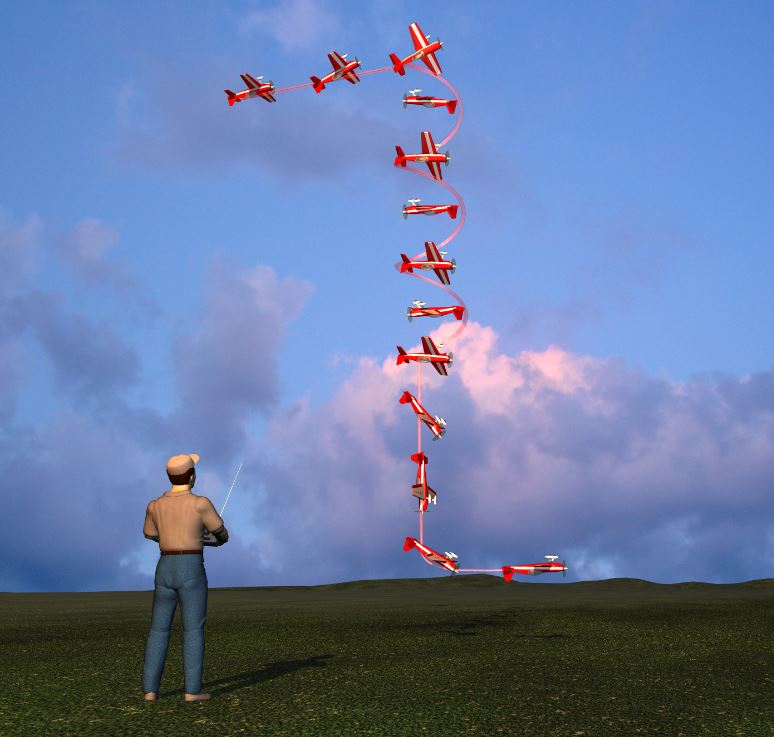 In the early days of aviation, spins were often fatal because most pilots did not understand how to properly recover from a spin. While in an upright spin, the pilot would pull back on the elevator stick in an effort to save the airplane (and their life!) and only make the situation worse. Since the spin occurs when the aircraft is in a stalled state, adding elevator just keeps the airplane stalled.

If you are new to the aerobatic world, you may be unfamiliar with the term “stall” when it comes to various aerobatic moves, as most student pilots are only aware of the consequences that stalling an airplane can have on a landing. However, some maneuvers are to be performed while the aircraft has stalled, like the stall turn, the tail slide, and the spin, to name a few.

A proper negative spin entry begins from inverted horizontal flight at a fairly high altitude while flying parallel to the runway. Then you must decrease throttle and feed in enough down-elevator to maintain altitude. Eventually, elevator authority will not be effective and the airplane will stall. At that instant, the nose will fall and a wingtip will drop in the direction that the spin rotation should be flown. If the left wingtip drops, the pilot should perform the spin to the left, which will require left aileron, right rudder and down-elevator. Similarly, if the right wing tip drops, the pilot should apply right aileron, left rudder, and down-elevator.

Let’s start by taking a look at how your aircraft has been set up. Then, we will go over all vital inputs needed to execute this maneuver, as well as a few key flight techniques. After all, the goal is to make you a better pilot!

If you have been reading my columns, you may know that I like to use flight modes. In the simplest form, this means that all dual and/or triple rates can be found on one switch. If you want to perform a maneuver like the spin, you don’t need to remember which independent switch setting you used for the rudder, elevator and ailerons. Instead, you can apply all of these deflection and exponential amounts to one switch position and simplify your life.

If your transmitter does not have the ability to use a flight mode, or something to the same extent, I recommend that you make your low-rate settings applicable to the spin. Then you can make your high-rate settings apply to only extreme 3D maneuvers. I think it is critical to minimize the amount of time you spend searching for rate switches so you can concentrate on flying the aircraft!

Please remember that exponential (expo) should be used with care. Expo “softens” the feel of the aircraft around center stick on a given control surface to make the aircraft less erratic. A lot of exponential should only be used with a lot of control throw; otherwise, the aircraft may be extremely sluggish. Start with small increments and increase the percentage until you are content with how your aircraft feels.

Begin by climbing to a safe altitude, which for a typical park flyer that has a wingspan between 48 and 52 inches, is between 500 and 600 feet. Your entry altitude needs to allow us enough space to establish a brief vertical downline after the spin rotations have been completed. Once the airplane is at altitude, fly it inverted and parallel to the runway at about 25% throttle. When the airplane is about 100 feet away, decrease throttle slowly to the idle position. Feed in enough down-elevator to hold altitude. At some point, you will run out of down-elevator and the airplane will stall. This should occur while the aircraft is directly in front of you. At this point, both the nose of the aircraft and a wingtip will drop. Now, let’s say that the left wing drops first. This means that the direction of the spin should be to the left. Use left aileron, right rudder, and down-elevator to complete three rotations. Then, neutralize all inputs to establish a vertical downline. Push 90 degrees and increase throttle to exit the maneuver in inverted, level flight.

STEP 1. Align the aircraft parallel to the runway and inverted. If the airplane is travelling with some airspeed, pull the throttle back to idle and slow the aircraft down as it approaches you. Now, if applicable, activate your “spin” flight mode. While the aircraft is slowing down, you’ll need to feed in down-elevator to sustain altitude. It is important to time this portion of the entry so the airplane stalls directly in front of you. When the airplane stalls, one wing will drop to determine the direction of the spin. In this example, we are spinning to the left, which requires left aileron, right rudder, and down-elevator.

STEP 2. Most aerobatic airplanes will spin using only a touch of aileron input. Using too much aileron may accelerate the spin rotation at times, which is not the desired result. Rather, we want to obtain a constant rate of rotation. At most, use about 10 degrees or so of aileron deflection, but hold in full down-elevator and full rudder input.

STEP 3. With your throttle still in the idle position, keep track of the amount of rotations the airplane has performed and maintain the same control inputs.

STEP 4. As the last rotation nears completion, you’ll need to neutralize all control inputs and establish a vertical downline. Then, after a brief line segment is shown, perform a gentle 90-degree push to exit inverted in horizontal flight. It is important to realize that heavier airplanes take longer to exit a maneuver like the spin. Once you neutralize control inputs, the aircraft may complete another portion of a spin rotation. When you know the tendencies of your plane, you will be able to compensate for this by timing your inputs properly so the rotation stops at exactly three rotations.