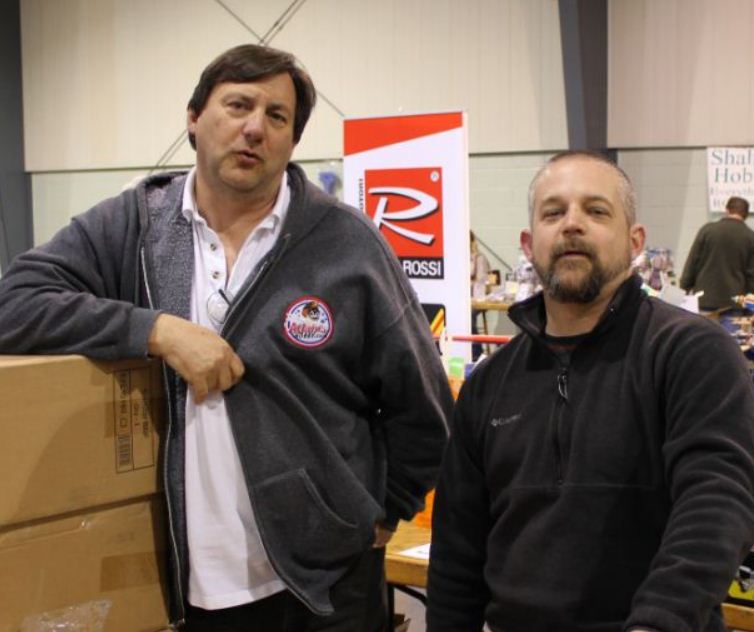 Every March for the past six years or so, my buddies and I make a pilgrimage to a small town in Georgia – a place not many people have ever heard of – a place that takes us about five hours to drive to – a place that is absolute heaven if you like buying and selling RC planes. The official name of the event is the Southeastern Model Show – put on by the Georgia Aircraft Modelers Association – we just call it the Perry Swap meet. It’s always the first weekend in March, and it’s pretty much always cold too. Why – you may ask, do grown men drive for five hours or more to go to a swap meet? Well, this isn’t just any swap meet – it’s touted as the largest RC plane swap meet in the country – heck – it might be the largest in the world.

If you want a deal on a plane, parts, motors, etc – this is the place to get it. There are over 1300 tables in 3 buildings of planes and plane related items for sale – there are also a few other items – like – boats, paintball gear, and even this year – lamps made from liquor bottles… It’s overwhelming when you see it for the first time. It’s like your first trip to Disney – you don’t know where to start. The best thing to do is pace yourself and walk row by row and take a brief look at everything. Let it sink in, grab some lunch and then – make deals. You will see everything – new planes in boxes, RTF planes – scratch built, broken fuselages, props, motors. There are some really nice planes and there is – well – some junk too. Not everything is priced at a great deal – you have to really look – the same exact plane maybe a hundred dollars more in the second building… My suggestion – never pay what they are asking – everybody knows you go to Perry to haggle.

I spoke with the even host – Norman Deputy – who told me that they average 3-4000 thousand people at the 2 day meet, and that they have people who drive in from as far as California. It’s been going on for 23 years and it supplements the local AMA club.

It’s not just used stuff that is selling either – there are also quite a few retail shops that exhibit there also – like Atlanta Hobby. I talked to the owner (debt holder as he titled himself) – Cliff Whitney about the show – he told me he has been attending the event for 15 years. He likens it to a big flea market and says that you should have that mentality when you walk in the door here. He brings a lot of close out merchandise that he says moves pretty well – “People are looking for deals – you gotta give some price breaks”. Not only did he have a large assortment of electric ARFs, but he was displaying a nice flock of multi rotor copters that were getting a lot of interest.

I also spoke with Tom Rothbauer of After Dark LED products – providing LEDs for RC vehicles. He told me that he has been attending the show for 8 years. His booth really stood out, like a Christmas tree – LED systems all over the place and planes on poles ten feet in the air all lit up. He said business was good, and that it’s worth it for him to make the trip form SC.

With all this talk about buying – you have to remember – for you to buy – someone has to be selling. We always bring things to sell every year – it’s like we’re upgrading our fleet. We sell the planes and parts we are tired of and upgrade to better and sometimes bigger stuff. The tables are cheap to rent – $15 for two days. Some tips on selling – whatever you have the price marked at – be prepared to be offered less, in some cases – a lot less. We also don’t like to be chained to our tables – so we work in shifts and cover for the other guy who’s out buying. You can also just leave your phone number posted and get a call when someone wants to buy. I’ve seen guys who walk the floor and find a deal, buy the plane and then put it up for re-sale 5 minutes later. There are even guys who are out in the parking lot waiting on people bringing in their planes to sell and make a deal before the plane even gets in the building… The things that seem to always seem to sell well – ready to fly build planes in good condition and ARFs in the box. The things that seem not sell so well – used motors and batteries, any plane that is broken and liquor bottles made into lamps…

So, if you want to get rid of the old ugly stick, gas motor and Spectrum 6 radio, or you’re looking to grab that big Hellcat you’ve always wanted – Perry is the place – just remember – bring lots of cash and get to Longhorns early – it’s the only Steakhouse in town and its slammed…