The indoor flyer that every kid (no matter how old) should have! 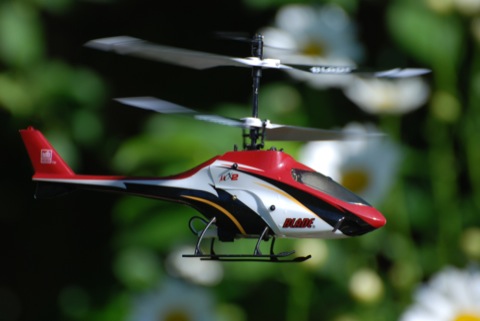 The Blade brand of electric helis carries a reputation for first-class quality across its entire product line. Blade offers three levels of E-copters to suit every type of pilot—from beginner to expert. The recently released Blade mCX2 is targeted at the beginner pilot, but is also quite suitable for experienced heli or fixed wing pilots who are looking to move indoors and fly in confined spaces. After years of flying fixed wing planes exclusively, I cut my heli teeth on the original Blade CX. Flying these small electric helis has opened up a new and exciting facet of this crazy hobby to me, and I am sure glad it did! When I’m too busy to pack up and drive to the field, or when the conditions outside won’t allow me to fly my park flyers, I can scratch my RC itch right in my living room while the game is on TV.

The “C” in “CX” denotes that this series of helis utilizes a super stable counter-rotating rotor assembly instead of the more traditional tail rotor configuration. Axial stability is achieved (in this case) by placing a second rotor assembly on top of the main rotor and spinning it in the opposite direction. Axial rotation happens when the 5-in-1 control unit slows one of the main rotors relative to the other, causing the heli to rotate in the direction of the slower rotor.

You can purchase the Blade xCX2 as either a Bind and Fly or a Ready to Fly, the only difference being that the BnF does not include a transmitter. You will have to supply your own compatible DSM2 transmitter. I used my Spektrum DX7 for most of this testing, but I was also able to evaluate the RTF version. Both versions include literally everything else that you’ll need to fly, and I had it both out of the box and in the air in the time it took to put a charge on the flight battery. 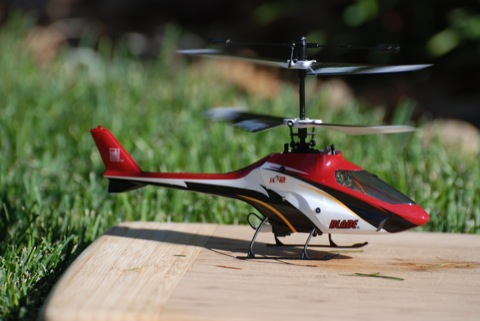 The Blade mCX2 may be small, but it is actually pretty durable. I have had to put it on the ground quickly a few times because one of my kids came around the corner or I lost track of the battery run time, and I have yet to damage it. This was a bit of a surprise to me, because one of the knocks on the original Blade CX was that it was easy to break the main shaft. But with this heli the manufacturer has addressed that concern. In addition to my own abuse of the mCX2, I have handed the controls to several of my friends to show them how easy it is to fly. Nobody that I handed it to had ever flown an RC heli before, and one fellow had never tried his hand on any RC model of any kind! All of them had success (with a bit more coaching required for the complete rookie) flying the mCX2.

As it comes out of the box, the RTF version is set up for very tame control response, ideal for a beginner. The BNF flew very similarly when simply bound to my DX7 and no modifications were done to the control rates or curves. Once the pilot becomes comfortable with the basic settings out of the box, it‘s time to turn up the heat a little bit. Blade has had the forethought to include a set of long swashplate control balls on the swashplate to make the flight response a bit more aggressive.  One simply has to pop the lower rotor head links loose from the shorter swashplate control balls and move them to the longer ones. If that doesn’t do the trick for you, you also have a “high rate” setting on the RTF transmitter. Pilots with the BnF version have a whole universe of customization at their fingertips with a programmable radio. With the swashplate set to the more aggressive links, and the transmitter on high rate, the mCX2 becomes a different machine. While not capable of 3D tricks, it does become much less tame than it is on the beginner, or low rate, settings.

One recommendation I have for pilots choosing the BnF version is to disable the ratchet feature on the throttle stick of your radio. On my DX7, I simply flipped the ratchet spring over so that the point doesn’t engage the notches on the throttle stick, but there is still some tension on the stick. I have started doing this on all of my radios because once I got used to the feeling of a non-ratcheted throttle, I grew to like it. Taking the ratchet out on helis is almost essential because it is next to impossible to find a hover setting that is exactly on a ratchet notch. 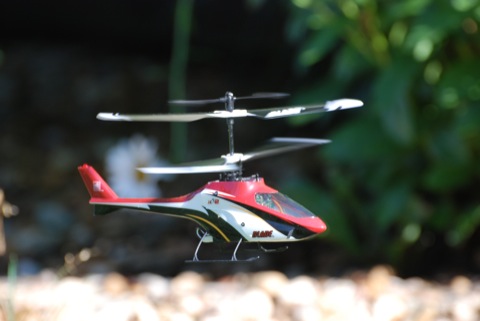 Pilots looking for a fun, easy-to-fly heli to learn on or fly in confined spaces will find what they need in the Blade mCX2. It isn’t really designed or suitable to fly outdoors, as the slightest breeze will blow it off course. In fact, flying it below the ceiling fan on the fan’s lowest setting will cause it to buffet a bit. In order to get the outdoor flight shots, I had to wait for a completely calm and sunny morning.

Flight time is excellent with the supplied 120mAh battery, and with the RTF version one could fly at the local gym on the way home from the hobby shop. Literally everything you need to fly is in the box, even new batteries for the transmitter and charging station! 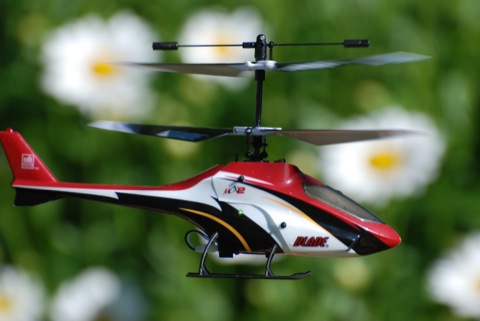 As I mentioned before, the Blade mCX2 is a built around a very stable counter-rotating rotor design. This inherent stability makes it a great platform on which to learn the basic controls of a helicopter and as with any airframe, stability precludes aerobatic mobility. However, that isn’t to say that the mCX2 can’t get around! Once a beginner pilot has become comfortable with the basic controls and has mastered hovering in different orientations (start with hovering over a spot, like a dime on the floor, and the nose away from you) it’s time to start taking trips around the living room.  Once you’re comfortable with forward, backward and sideways flight, the next step is to start turning up the control rates. I think that the folks at Blade have done a very good job of expanding the flight envelope quite a bit beyond a pure beginner machine. The more aggressive flight setups make the mCX2 quite a bit quicker than the beginner setups.

Throttle response with the mCX2 is much improved over the original Blade CX as well. Perhaps because it is very light, and also because the micro coreless motors are very powerful for their size. Battery capacity is increased from the mCX so flight times are longer. It’s fairly quick vertically, and jumps off the ground on takeoff.

Heading stability is aided by an integrated gyro in the 5-in-1 control unit. Minor heading correction is sometimes required, and a click of trim or two is needed as the battery wears down, but all in all the mCX2 feels very locked in. The gyro stabilization is actually pretty cool, and works very well. As I became very comfortable hovering in close, I reached out and pushed the tail with a finger, and the mCX2 pushed back! The gyro works very well! When set to the higher speed settings, pirouettes are very quick in either direction and stop locked on a heading when commanded to do so.

Also built in to the mCX2 are a series of LED lights that not only look cool, but they make it possible to fly in the dark. Obviously this is best done in a clear environment, so that you don’t risk hitting a table that you can’t see. Flying in the dark is in
teresting, and in some ways almost easier than flying with visual distractions. Not that you can explore a dark room with an RC heli, when all you can really see is the heli, but it makes it a little easier to focus on just exactly what your subject is up to. The bright blue light under the windscreen actually illuminates a dark room a bit, but not enough to avoid obstacles. Also there are lights on either side that make it easy to orientate yourself. 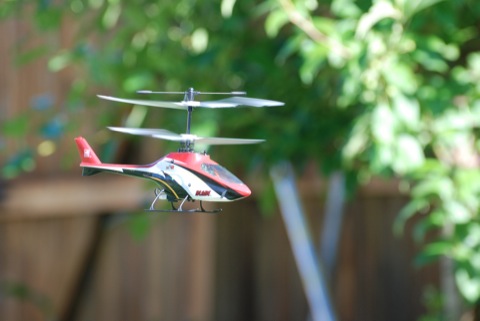 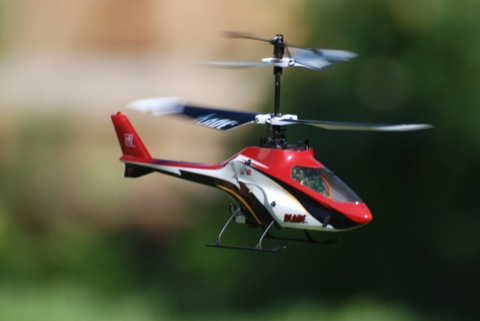 The Blade mCX2 is perhaps the ultimate platform for beginner pilots to learn the basics of controlling an RC heli. It has everything you need to fly, is inexpensive, durable, and replacement parts are easy to get for when something catastrophic does happen. It has “full boat” controls and hobby-grade quality, as opposed to the toys that we’ve all seen on the TV commercials. And once you’ve become comfortable with it on beginner settings, you have the option of spicing it up a bit to keep it interesting.

Flight duration: 5–7 minutes (depending on how aggressive you fly)

+ Amazing value for the price.

I personally saw three different levels of flyer have success flying this chopper, from advanced beginner fixed wing pilot, to one fellow who had only flown on a simulator, to a complete newbie who had never flown anything.