If you like vintage biplane models, there are several WW I warbirds that make excellent scale projects. One of the more popular aircraft is the Nieuport XVII (Type 17). Not a true biplane, this French fighter was a “sesquiplane” designed by Gustave Delage and manufactured by the Nieuport company. An improvement over the Nieuport 11, the Type 17 was a little larger than earlier Nieuports and better adapted to the more powerful engines. It was also equipped with the new Alkan-Hamy synchronization gear, permitting the use of a fuselage-mounted synchronized Vickers gun firing through the propeller disc. Earlier designs were equipped with a Lewis gun mounted on the top wing to clear the propeller arc. 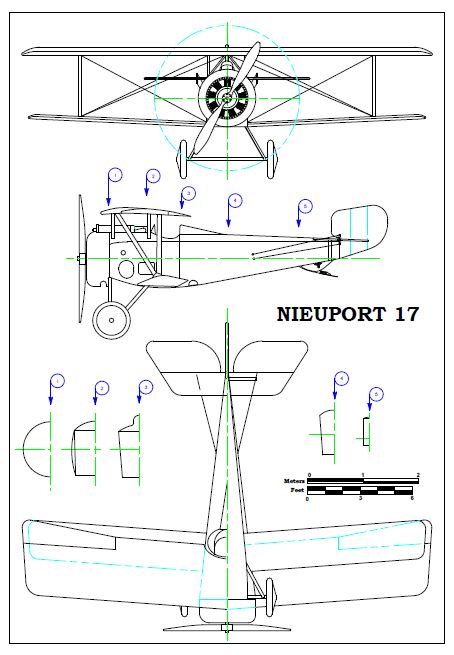 When it was introduced (March 1916), The Type 17 had outstanding maneuverability and an excellent rate of climb giving is a significant advantage over fighters on both sides. At the time it was described as “the best pursuit plane of the day”. It was used by several Air Services and entered service with every Allied power. Copies of the aircraft were also operated by the Deutsche Luftstreitkräfte (German Air Service). Mass-produced by several French firms, the Nieuport 17 and its derivatives were built under licence in Italy by Nieuport-Macchi and in Russia by Dux. Unlicensed copies, notably the Siemens-Schuckert D.I and the Euler D.I, were produced in Germany.

Almost all of the top French Aces flew the Nieuport 17 during their careers, including Georges Guynemer, Charles Nungesser, Maurice Boyau, Armand Pinsard and René Dorme. The American volunteers of the Escadrille Lafayette also converted from Nieuport 11s to the Nieuport 17 although only one pilot, Raoul Lufberry, achieved Ace status with the Type 17.

This main photo shows a Nieuport Type 17 (the most widely used variant) in French markings at Langley Field, Virginia, during 1917.  Next to the aircraft stand US Capt. J. C. Bartolf and French Lt. Emmanuel Le Maitre.  The latter had arrived as part of a 12-man French Aviation mission on June 19, 1917, to help introduce the aircraft to the American military. From late 1917 to August 1918, Lt. Le Maitre served as a flight instructor at the airfields at Forth Worth before returning to France.