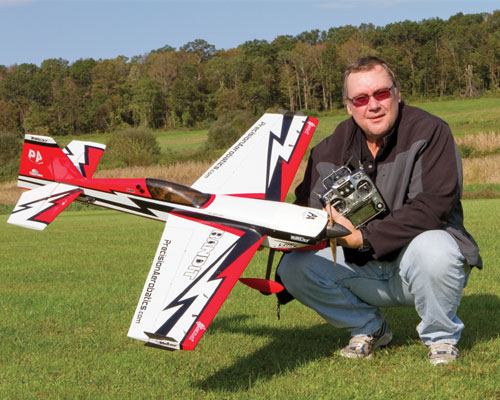 By Aaron Ham
Let me start out first by saying this: If the designers at Precision Aerobatics decide to produce a full-scale Bandit, I would like to offer up my services as factory demo pilot. What a gorgeous-looking airplane it is! In my opinion, it is a cross between the MX Aircraft MXS-R and a Zivko Edge540. Its sleek lines, racer canopy and powerful motor system give it performance that full-scale pilots would drool over—myself included. Although this airplane is not intended for the average beginner, it can be flown by anyone who has mastered the basics of RC flying and has a good feel for aerobatics. In the hands of a skilled and experienced pilot, this airplane is capable of extreme unlimited freestyle aerobatics and all-out, high-speed racing just like those new TV stars performing in the Red Bull Air Races.

Precision Aerobatics is offering its new Bandit with power and superior performance that far exceeds any full-scale airplane. Constructed using PA’s CF FiberFusion Technology, the airplane utilizes embedded carbon fiber (CF) within each of the fuselage stringers and uses CF cross bracing to increase strength without any kind of a weight penalty. Also included in the kit are numerous carbon-fiber parts which include the landing gear, the wing tube, control arms and pushrods. Also included are German-made Ball-links, and CNC-machined clevises, a CNC-machined battery tray and a carbon-fiber leading edge. A carbon-fiber-reinforced fiberglass cowl and wheel pants, and a generous assortment of quality hardware round things out. Optional upgrades include CF servo arms, a CF spinner with aluminum backplate and a set of CF wheel pants. If you can’t tell, Precision Aerobatics is all about quality, strength and performance.

Read the full exclusive review in the January issue of Model Airplane News!