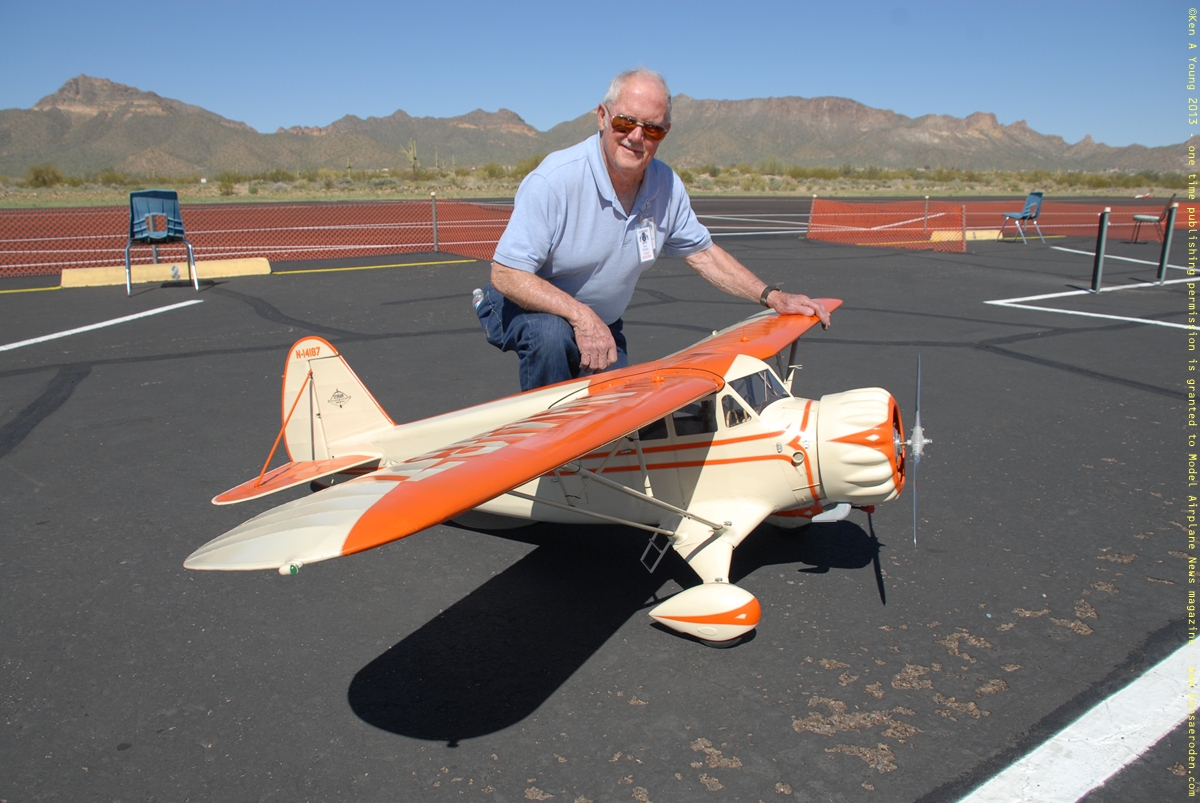 When it comes to scale subjects, nothing is so appealing as a classic subject from the Golden Age of Aviation. Ron Peterka has an amazing Subject that will soon be featured as a Construction article in Model Airplane News, his amazing Stinson SR-5E. 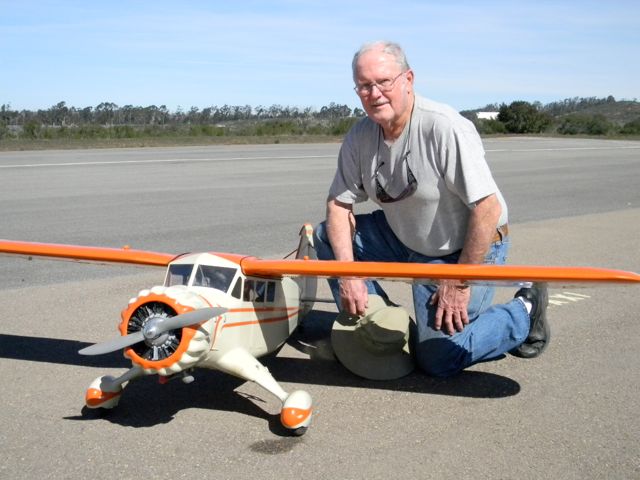 This 1:5 scale model of Stinson “Reliant N-14187 is, in a way, a memorial to Tom Laurie who spent ten years restoring a vintage 1934-35 Stinson to a prize winning aircraft.  He was a model builder who wanted a full-scale project even though he didn’t have a pilot’s license or an A & P license.  He never did get his pilot’s license and had to have a rated pilot fly his spectacular restoration to Oshkosh for the 1984 EAA convention where he won Grand Champion – Antique. 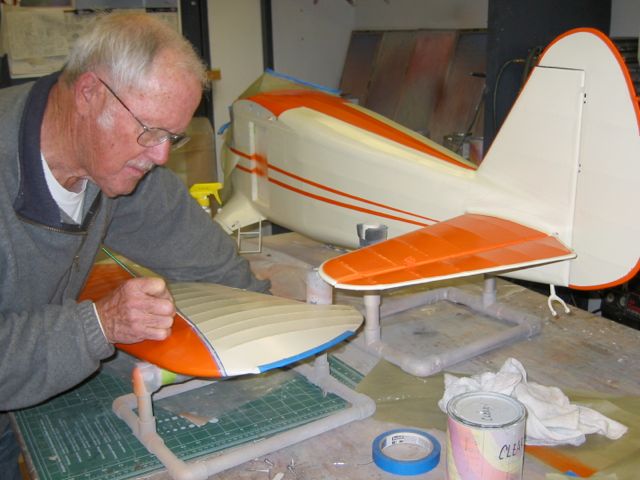 If you decide to build this model for possible competition, you should collect all the documentation you can find before starting construction.  A good photo pack is available from *Bob Banka’s aircraft documentation service.  Model Airplane News was kind enough to offer free downloadable 3-view drawings of the SR-5 by W. A. Wylam that are incredibly helpful and very closely match the measurements taken from the full-scale aircraft.

Once the drawing is visible right click to save the high resolution version.

A good article on this aircraft was printed in the Nov. 1984 issue of the *Sport Aviation magazine of the E.A.A.  There are good photos and information there. 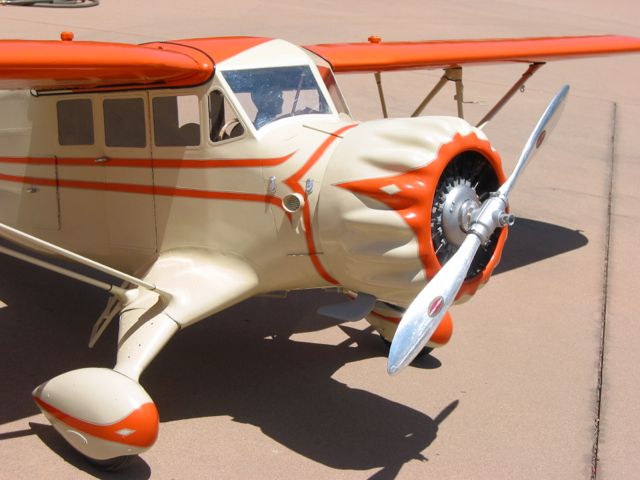 This is a precision scale model and requires advanced building skills so this article will only cover special areas of building.   All materials are readily available balsa, ply, and fiberglass.  A list of vendors for specialized pieces will be found separately.   The covering and paint I used is the Stits Process which matches the materials used on the full-scale aircraft as noted in the aircraft logbooks. 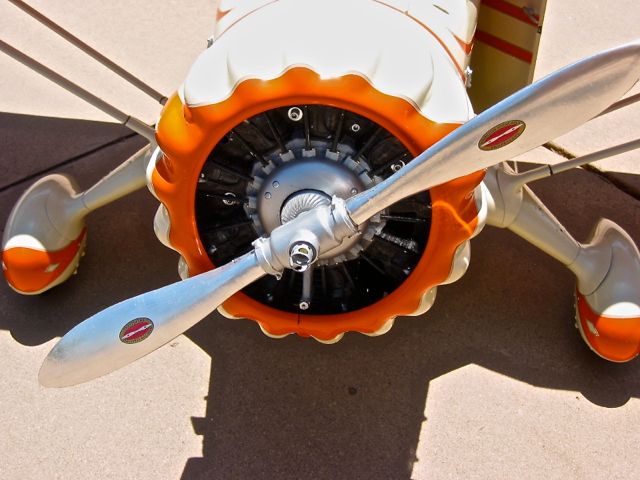 My completed model weighs in at 25 pounds powered by a Zenoah G-26 engine and flies very scale like at half throttle, although it tends to float a bit, and the flaps are not quite as powerful as you might expect.  This is good, because the model tends not to balloon when flaps are applied in flight.  The horiz. Stab. and elevator are enlarged 5% for better flight stability as allowed by USSMA rules. 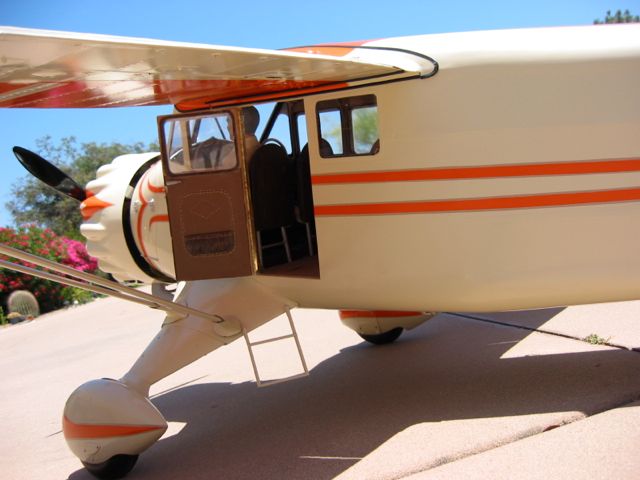 My efforts to build a precision scale model were helped by having the Stinson on display at the San Diego Aerospace Museum adjunct hangars at Gillespie Field where I could climb in and around to measure and photograph every detail, inside and out.  Several months of drawing, and redrawing, gave me a set of construction drawings and I began construction. 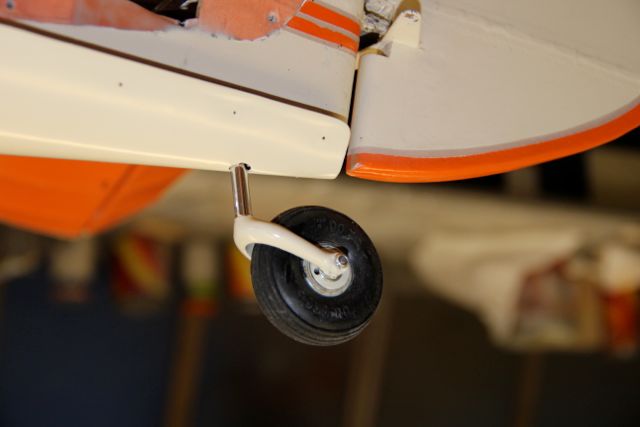 From the beginning I wanted a scale sprung landing gear rotating around a point that was outboard of the fuselage side so I actually built a landing gear assembly before having anything to put it into.  The module is built up of ply and sheet aluminum with gear legs made up by *TNT Landing Gear Products in Swanton OH.  They have the equipment to cut and bend the ¼” thick aluminum leg blanks to the specs on the plans at a reasonable price. 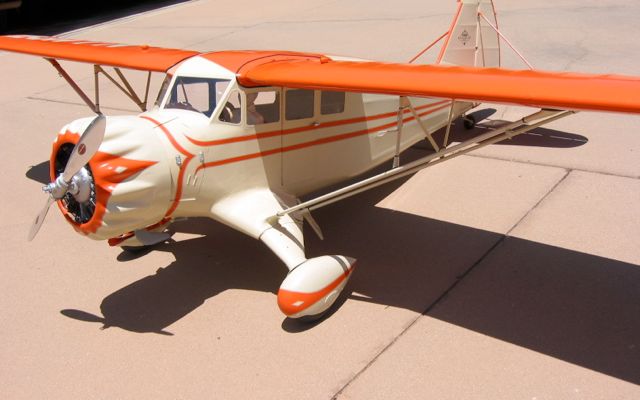 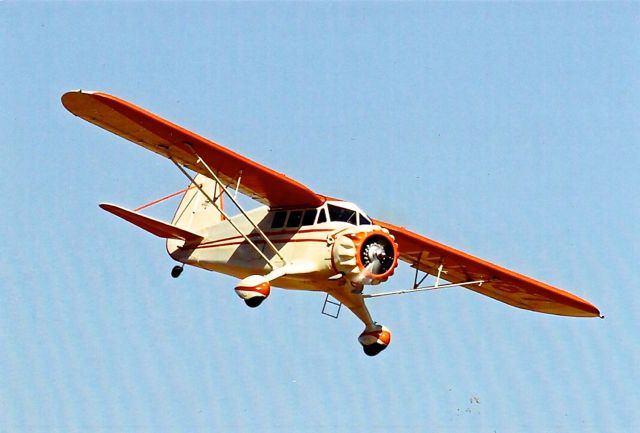 When completed the gear is sprung, adjustable, and operates in a scale manner with the wheels straight on the ground, hanging with negative camber in flight, and still having enough movement to absorb landing shocks.  Very realistic.  If you decide to simplify, I would suggest a one-piece gear with a heavy plywood support extending outboard above the gear to force the gear to flex around the scale location. This would replace the whole spring assembly. 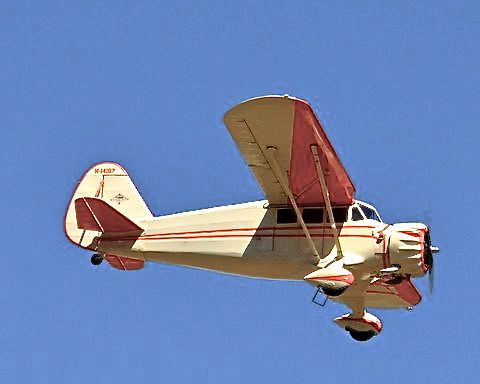 A *Zenoah G-26 gas burner provides ample power for realistic flight at half-throttle and a 20 oz tank will give you close to 25 minutes flight time. The engine cowl on my model is a modified cowl
from *Fiberglass-Specialties as used on the Top Flite SR-9  Gull Wing Stinson.