Mixing out unwanted tendencies during knife-edge is widely practiced, but like most things in aviation, there are trade-offs to consider. Programmable mixes let you automatically mix another control with your primary input to reduce or eliminate some of the unwanted tendencies associated with certain inputs and maneuvers.

For example, when you apply a lot of rudder to sustain knife-edge flight, most planes tend to gently roll in the direction in which the rudder is being held. Therefore, pilots routinely mix opposite aileron with rudder to cancel out the rolling tendency during knife-edge. However, while a mix can help make the maneuver for which it is intended easier, it may prove contrary to what’s needed during another maneuver or end up causing a deviation samewhere else.
Many “tendencies” are held in check at higher speeds and only show up when the plane is flying slower. Some tendencies show up at high-throttle settings, but not when the throttle is low. This means a lot of mixes are, only appropriate at certain air speeds and throttle settings. This partly explains why those who look to mixing as a substitute for developing better flying skills often find it difficult to advance beyond the initial success they had when, the mix was first introduced. In fact, you can travel across the country and observe fliers involved in an endless cycle of trying to “dial” into their radios the corrections that they could easily be making, only to have to repeat the process each time conditions change, a new maneuver grabs their interest, or they fly a different airplane. You might think that programming the radio has become their hobby! Unless the only maneuver you intend to fly is knife-edge, the most efficient and effective use of programmable mixes is to limit your mixes to no more than 5 to 10 percent (15 percent max). If the tendency that you want to correct is slight, try a 5-percent mix. If it is more noticeable, try a 10-percent mix. Limiting each mix to 5 to 10 percent (15 percent max) will help make flying easier without having too much impact on other maneuvers or causing you to do a lot of backtracking as your repertoire expands. BY DAVID SCOTT 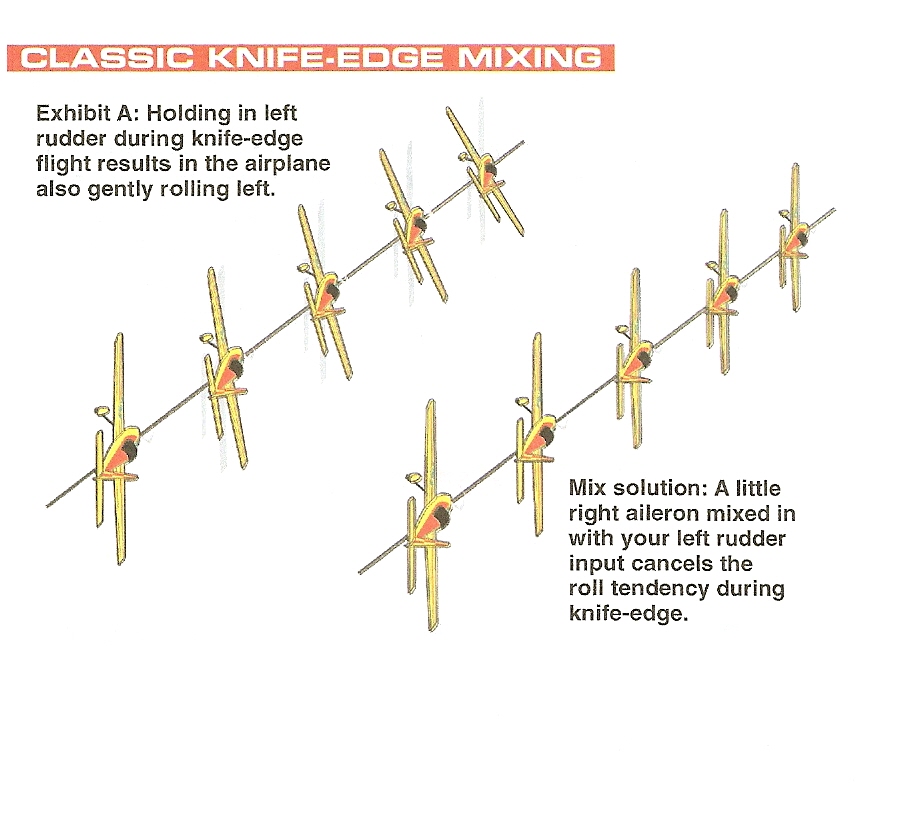