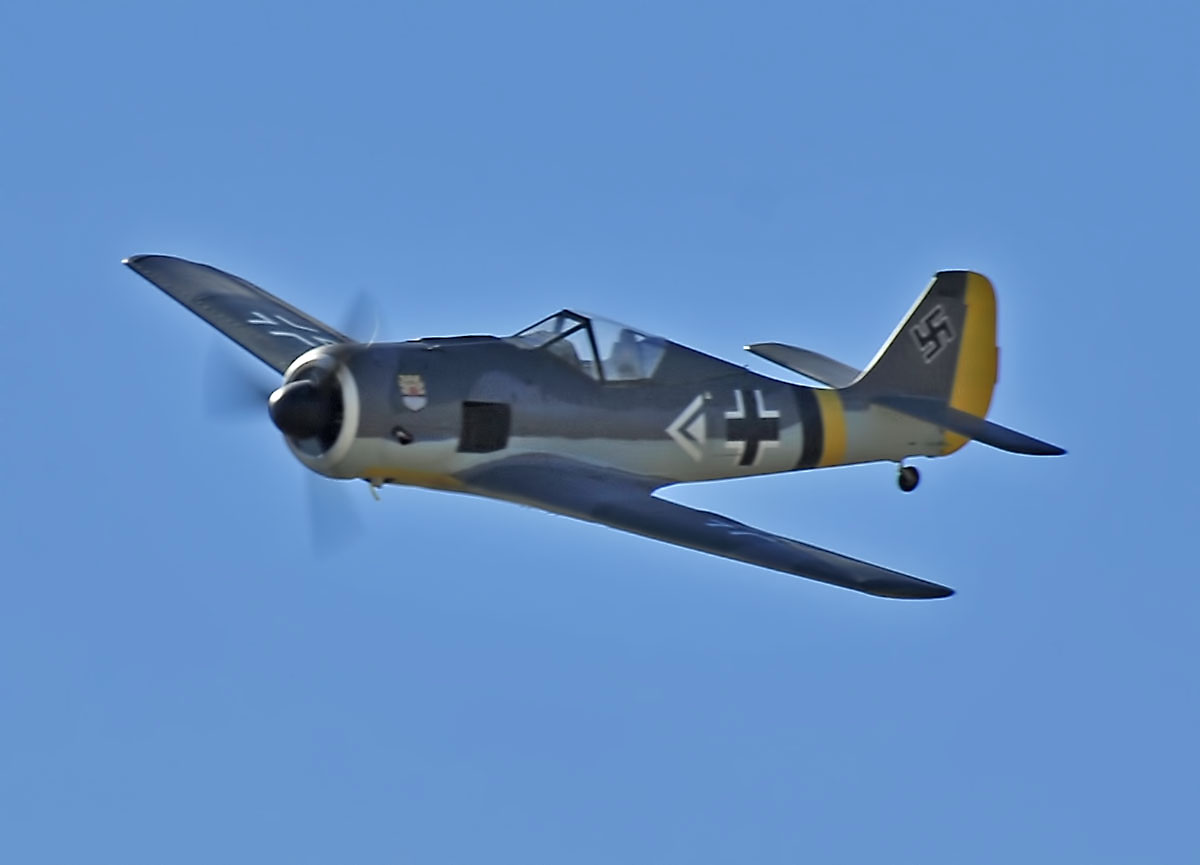 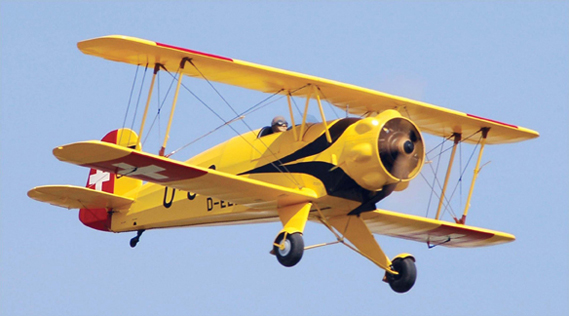 Once you start flying bigger airplanes with 80-inch-plus wingspans and larger, you have to do a little mental recalibration. With the typical .40 to .60 2-stroke glow-powered airplane, we were conditioned to equate maximum rpm with maximum power. With big birds, however, it’s much better to evaluate both prop thrust and airframe design to help determine the best power system. No, I am not going to tell you what size of prop will work best with your particular model, but I will help you to determine in which direction you should turn to figure out the best firewall-forward combination.

The first thing I do is figure out which kind of model I have and what its mission is. Will it fly fast or slow? Does it have a high or a low wing-loading? Is it a race plane, an aerobat, or a trainer? You get the idea. Here’s an example; a biplane with a moderate wing loading will generate a lot of drag and will generally fly slower than a sleek, low-drag monoplane. The biplane is happier with a large-diameter prop with a lower pitch, and the monoplane will perform better with a smaller-diameter prop of higher pitch. This is where I determine whether the model follows a horizontal or a vertical performance direction. Generally, biplanes excel in “climb rate” because of the increased lift produced by two sets of wings, but at the cost of slower horizontal performance. The sleek monoplane, on the other hand, converts its prop thrust into forward acceleration and maximum airspeed at the expense of climb rate. Thrust and power-to-weight ratio are two performance-determining factors.

Over the years, I have concluded that engine horsepower (hp) figures alone are pretty much useless. You also have to look at the rpm at which that horsepower number is produced. Horsepower figures should be expressed in terms such as 2.5hp @ 7,500rpm. But regardless of an engine’s hp rating, it can do nothing for us until we find a prop that effectively converts engine power into the thrust required to fly our model. This is where the engine’s torque, or twisting force, comes into play. The key is to find the correct combination of hp and torque to turn a prop of sufficient size to produce the thrust required to overcome the model’s drag. And it has to do this without overloading and overheating the engine.

Most of the time, for general-use sport models, maximum thrust will not be produced with the prop that allows your gasoline engine to turn the highest rpm. That sweet spot of rpm will be closer to its maximum torque numbers. Don’t worry; I am not going to get into the math here. I just want you to have a clearer picture of how to match your engine, prop and airframe. 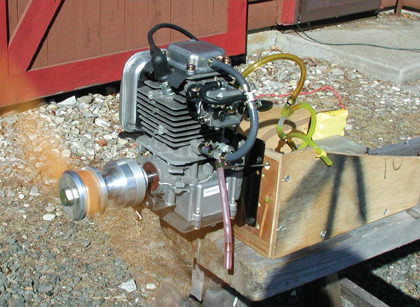 (Above.) Testing engines and prop combinations is best done on the ground with a simple test stand. Shown here is my 34cc Fuji Imvac, 4-stroke gasoline engine. The test stand is nothing more than a box structure screwed to a 2×10 that’s bolted to a pair of sawhorses—inexpensive and portable. I use a servo driver to control the throttle. 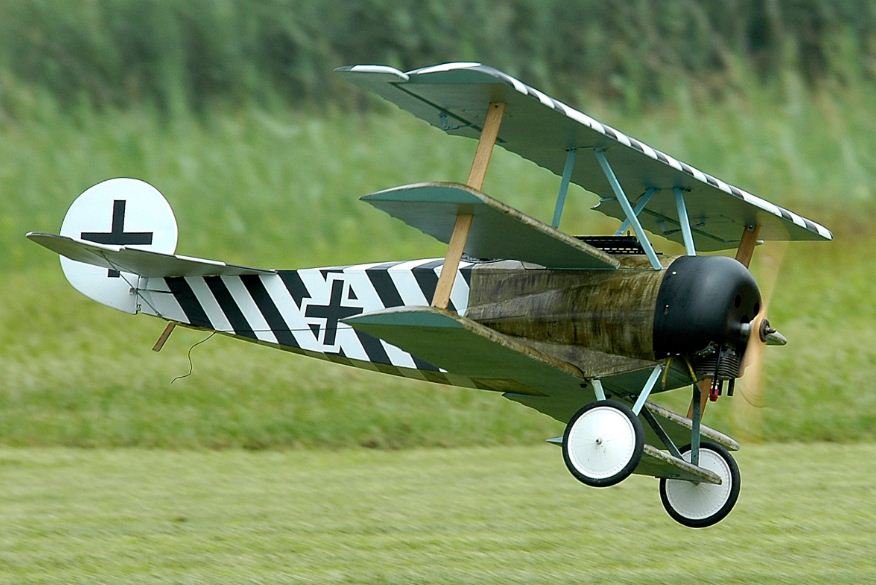 (Above.) My Fokker Triplane built from a Balsa USA kit was powered by a Zenoah G-26 but needed a prop change to improve its climb performance.

Start your quest for the perfect prop by choosing a propeller within the engine manufacturer’s recommended range. Balance it, bolt it to your engine, and use a tachometer to see how many revs you get from the engine. I like to set up a simple engine test rig so I can do this without having to assemble the entire model. Once I find a promising candidate (or two), I bolt the engine to the model and go flying to see how it will perform.

As an example, I recently tested my Balsa USA Fokker Dr.1 Triplane powered by a Zenoah G-26 turning a Menz 18×8 prop. With this combination, the engine turned 7,850rpm, peoduced 11.5 pounds of thrust. The Triplane took off easily and flew nicely but it just didn’t climb as well as I wanted. I switched to a standard, wide-blade Zinger 18×6 which dropped the rpm to just over 7,200 and the climb rate was roughly the same. The best performance came when I invested in an APC 18x6W; it produced 7,700rpm, and the model’s climb rate improved noticeably. Measured on my ordinary digital fish scale, the APC prop produced 13 pounds of thrust, an improvement of 1 1/2 pounds over the Menz prop.

You will discover that all props are not created equal. Prop shape and design have a big effect on efficiency, so size and pitch changes don’t always equate to linear rpm changes. One brand of 18×6 prop will turn more or fewer rpm than another 18×6. This is why you have to experiment.

When it comes to picking prop and engine combinations, don’t lock yourself in to what other people tell you. Do a little experimenting for yourself, and take your time to find the best combination for your model. Take notes, then apply the data to your next modeling project. Maximizing performance is a lot of fun! 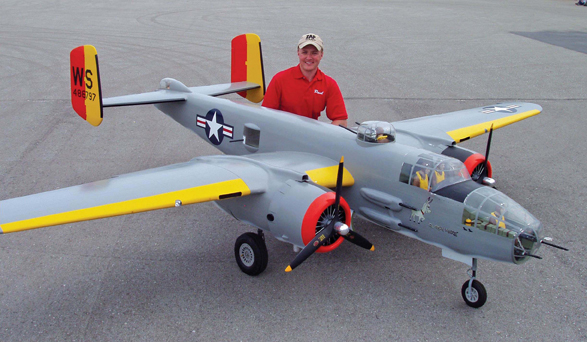 (Above.) You know this pilot is interested in proper power loading! Paul LeTourneau of Oconto, WI enlarged Nick Ziroli Plans from 101-inch span to over 160-inches for his 1/5-scale version of the B-25 Mitchell bomber.