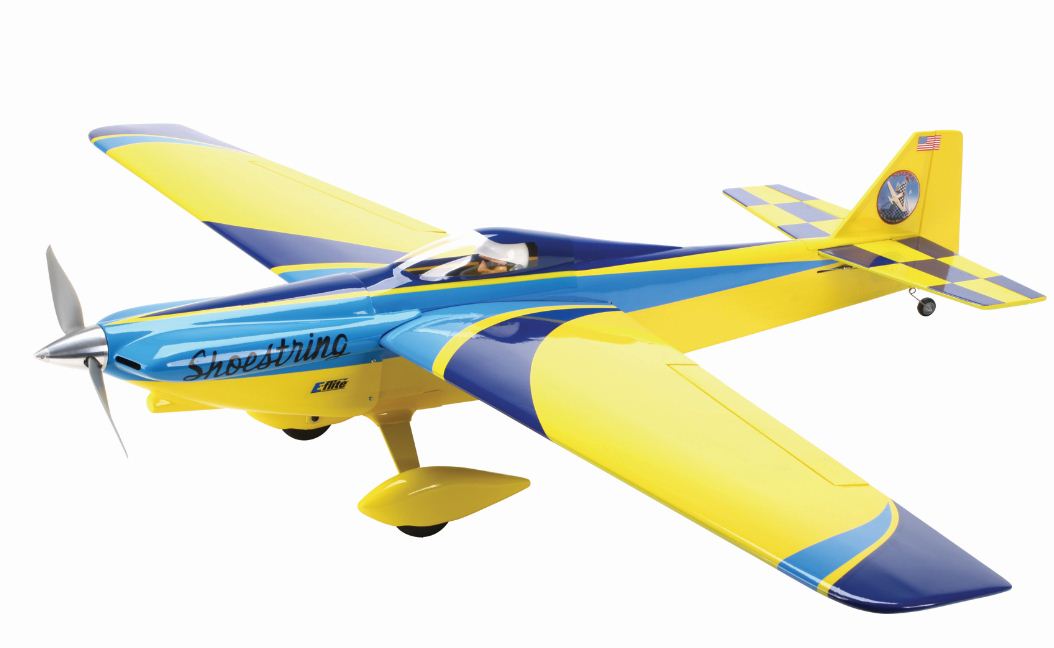 Want to go fast and turn left? battle it out as you tear up the pylons? how about just having a super sleek racer for fun flying on Sunday? the new Shoestring 15e is just the ticket for high speed electric fun!

At home as a sport flyer or serious racer, the E-flite Shoestring 15e EF1 Racer is built for performance. This electric sportster is NMPRA-legal for EF1-class pylon racing competition but can fly sport aerobatics as well. With a mid-wing design constructed of lightweight balsa and plywood and a low parts count, this ARF is exceptionally easy to assemble. Adding to its great looks are the one-piece fiberglass cowl and included pilot figure.

SCOTT MCAFEE: THE MAN BEHIND THE NEW RACING CLASS

Scott McAfee is the current president of the NMPRA (National Miniature Pylon Racing Association) and one of the key figures to getting this electric class of racing started. The new EF-1 is designed so that all the planes and equipment are evenly matched. Any planes or motors are tested by Scott or fellow racers to make sure they meet the standard entry-level specifications designated for this class. The idea is to have EF-1 as an entry class that has planes and motors readily available and inexpensive, so the beginner pylon racer can get started easily. The other appeal is that all the planes run at about the same speed, so winning the race is up to the pilot.

Scott states that so far the plan is working out very well. All races are fun for everyone and the pilots are having a great time. It is similar to how racing was 20 to 30 years ago, when it wasn’t all about winning but having a good time. As Scott said, people who fly in EF-1 just have a ball with it. Not to say it isn’t competitive, it is, but once the planes land, competitors have the biggest grins.

Scott also goes on to say, “The new EF-1 event is becoming more popular than even I could have hoped for. We decided to hold EF-1 this year at the NATS as an unofficial event, and we have been deluged with entries. Already we have 40 entrants, and with the others who have indicated they would fly EF-1, we could have more than 50 entrants in the class at the NATS.”