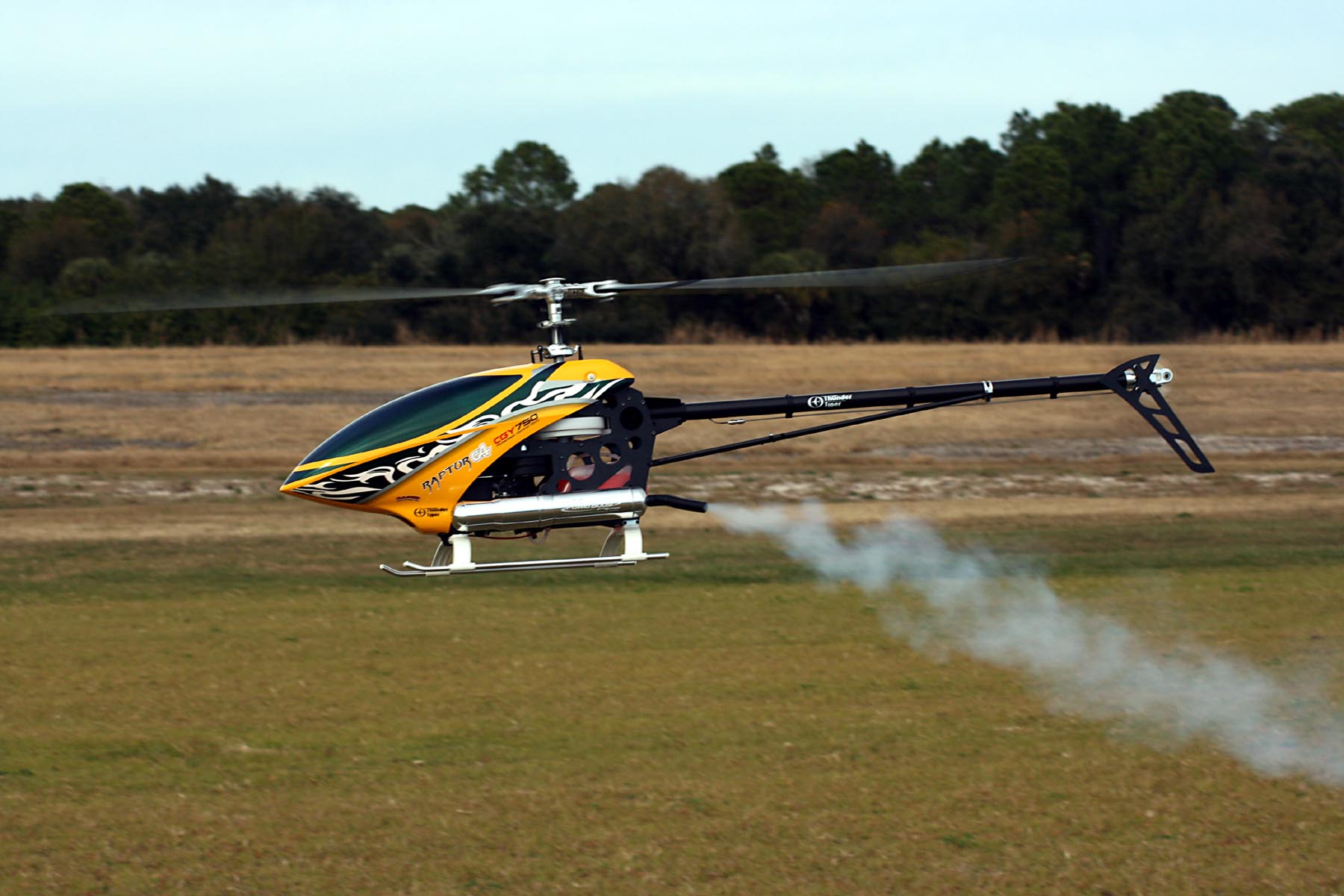 At the flying field the G4 has a presence all it’s own with its carbon structure, bright canopy and all metal flybarless head and tail rotor. While setting up for initial flight tests a crowd gathered like a giant inspection crew pointing out all its new design features and quality parts. There were even comments about the internal CNC machined metal braces that provide tremendous support while sacrificing very little weight. This would have made a great 15 minute commercial if someone had a video camera running.Hover – Initial flight testing consisted of a lot of hovering and gentle maneuvering to facilitate taking the needed pictures to support this review. I still prefer to run a new engine in a rich two-cycle to make sure all the internal parts are well seated, which resulted in the Raptor settling down into a comfortable hover with a rotor speed of about 1700 RPM.. Even though it was a wintry day with gusty winds, the Futaba CGY750 in hold mode kept the Raptor in a smooth and predictable hover requiring minimum control input.

Forward flight – Even with a slightly rich engine the Raptor transitioned into forward flight with authority. Helicopters climb and maneuver by using excess thrust, and the OS 90 HZ-R Speed provided plenty of it. Rapid climb outs and grabbing smash seemed effortless, enabling the Raptor to track throughout the largest maneuvers.The combination of the Futaba CGY750, together with the shaft driven tail rotor kept the tail “locked in” for both forward and backwards flight.

Aerobatics – The Raptor’s light weight (9.7 lb) and the tremendous power from the OS 90HZ-R engine, combined with the extended collective pitch range and Futaba CGY750 3-axis gyro, gave a whole new meaning to the term aerobatics and 3-D maneuvering. Moving the sticks to their extremes produced large pitch and roll rates, but without control interaction or loss of control. The large rotor disk, combined with the bright canopy, made the G4 easy to stay orientated with in flight.

Autorotations – The combination of the large rotor disk area and light weight of the G4 provides a lot of excess energy to make autorotations a pleasure to perform. Add this to the “locked in” tail rotor, and autos can be made from tail slides and backward approaches. For those of you who are used to making autos with smaller helicopters, you will be surprised how easy they are with the G4.