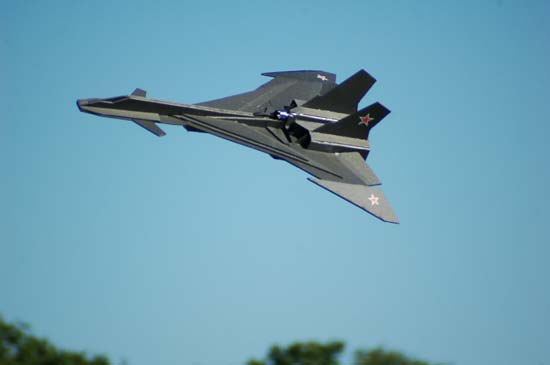 Picture this: the year is 1982, and Clint Eastwood is retired Air Force ace pilot Mitchell Gant, tasked to steal a top secret Russian military jet. His target is the MiG-31 Firefox, whose weapons systems can be controlled through thought. Sure, the plot may be cheesy and the graphics primitive, but I loved this movie, and still do. I’ve often imagined flying the Firefox low-level through the Urals, spitting up snow and rocks in my wake. Now I can, only on a much smaller and affordable scale.

RCPowers has introduced the Firefox, made from 6mm Depron foam and designed by Scott Lott. The jet is sold as a set of PDF plans that are downloaded in just minutes from their website. The manual is on the RCPowers website and includes color photos and detailed assembly instructions. Also on the website is a series of helpful how-to videos for both beginner and experienced pilots. Since these are just plans, you’ll have to do some work to get your Firefox in the air. At least you don’t have to sneak into a foreign country like Mitchell Gant did, so consider yourself lucky!

You’ll need to purchase three 31.5 inch x 24.6 inch black sheets of Depron, a power system, radio components, hardware and basic building items. Although this might seem like a lot, it’s still less expensive than buying an ARF or RTF plane. I purchased my Depron from FoamyDepot.com in bulk (sheets of 10), so I can make multiple airframes.

The build begins with printing the 15-page plans. Next, you’ll have to tape the pages together, cut the templates out, transfer them onto Depron, and cut out the actual model pieces. This part of the build takes a bit of time, so pull up a TV, turn on your favorite show, and before you know it, you’ll be done. Now comes the fun part—gluing all the pieces together like a big jigsaw puzzle and watching the Firefox gradually starting to take shape.

Be sure to use a sharp hobby knife to cut the parts from the Depron. Not every cut has to be absolutely perfect; this model is an “AK-47-style” build, meaning not every piece is exact, but once all together, it will work perfectly. Using a combination of 5-minute epoxy and hot glue will speed up assembly. Having a helper cut parts with you will shorten the build time almost by half (special thanks to my wife for the help).

I used the Grayson Hobby Park Jet Brushless Combo 2212-06 V2 (Super-Sonic), which includes a Park Jet brushless outrunner motor with attached bullet connectors, 30 amp ESC and all the necessary mounting hardware. The system is completely plug-and-play, no programming required. The power for this setup was provided by a Dualsky GT 2200mAh 11.1V 25C battery, also from Grayson Hobby. With an APC 6x4E propeller, I got 24 ounces of thrust at close to 19,000rpm at only 24 amps—more than enough power to make this jet scream across the sky.

It took me approximately seven hours to build this model, not taking into account the distraction of watching my favorite TV shows while building. It went together fairly easily with just a few small diversions from the plans. If this is your first time working with Depron, I’d suggest watching the various beginner and construction videos on the RCPowers website. If this is old hat to you, then you’ll be done and flying in no time at all. This jet looks fantastic in the air and stirs up quite a buzz at the flying field. The Grayson Hobby power system is a perfect fit and pushes the MiG-31 around the sky with authority. Now, get out there and show Mitchell Gant how to really handle the Firefox!

Being a mid-body pusher design with the motor above the wing line, hand launching is safer than with a traditional rear pusher aircraft. Holding the MiG-31 by the exhaust, launching is accomplished with a pushing motion rather than a throw. It’s possible to launch the jet solo, but I’d highly recommend using a helper. Even though there’s plenty of power available to fly the jet, getting up to flying speed on launch is crucial, so a strong push approximately 40-45 degrees nose up attitude is needed. The jet will nose down and roll slightly left as full power is applied and it’s accelerating, so be ready to apply full up-elevator. Once up on step, the MiG-31 is stable and climbs quickly. Overall thrust is reduced to approximately 18 ounces because the propeller is located mid-body and not able to receive full airflow. This still produces just under a 1:1 thrust-to-weight ratio, depending on your final ready-to-fly weight.

/SPAN>Landings are surprisingly easy, just set the throttle to approximately one quarter as you line up on final. As it approaches the runway, slowly reduce power to off with a smooth flare. Right before touchdown, pull full up-elevator on the stick and hold it; the plane will rapidly decelerate, almost stopping in mid-air, and belly drop softly to the ground.

Once properly trimmed, the Firefox was rock solid and flew like a true jet fighter. Rolls are significantly less sensitive than pitch. If you have a digital radio, program less sensitivity on the elevator and more on the ailerons to give you consistent performance.

The lack of rudders makes tracking a straight line in a crosswind difficult. On a calm day, tracking is straight as an arrow and it will go where you point the nose.

This model is not built or suited well for heart-stopping, high-G tricks, but simple maneuvers such as rolls are accomplished with ease. Regular loops are almost impossible due to the motor’s position above the wings, but inside loops are very tight. The Firefox looks and feels the best when performing low-level, high-speed fly-bys.

The Firefox flies at relatively high speeds, but its low-speed envelope is very impressive as well. It has enough power to fly at low speeds with a very high angle of attack. With its low wing loading, stalls are very gentle and glides are shallow and controllable.

For your first flights, I’d suggest you do not bend the wing ends down at all. The model is very stable and easy to fly with straight wingtips. Once you get comfortable enough with the model, go ahead and bend the wingtips no more than 20 degrees downward. The center of gravity is purposely located in a slightly tail-heavy position on the plans. This was done so when you throttle down, the nose flares up slightly and gives the Firefox excellent low-speed handling for landing and slow passes. Drop the hammer, and the nose levels out for better control at high speeds (since the motor is mounted above the center of lift).

Seeing the Firefox zipping around the sky was amazing and a ton of fun. Mitchell Gant would be proud, but remember, “You must think in Russian, do you think you can do that?”

Ideal for: intermediate to advanced pilots