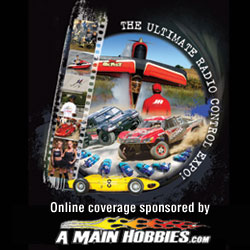 Two days of nonstop action … crowds packed the halls, tracks and flightlines … the sound of engines gunning filled the Pomona Fairplex … this was RCX 2011!

For the ninth year, RCX continued to be the ultimate expo for radio control devotees with action-packed, adrenaline-pumping, insane stunts and high-speed races,. Crowd favorites from this year’s show included a large assortment of expanded outdoor attractions showcasing the thrilling top-speed drag strip and the intense model airplane and helicopter aerobatics demonstrations, so popular they offered standing room only for viewers. Attendees were also able to enjoy an increased number of interactive exhibit options with a collection of “try me” demonstrations presented across the expo.

RCX hosted a line-up of professional champions, including:

“RCX always has a phenomenal turnout and this year was no exception. As we continue to enhance the show each year by adding new features and exciting events for the crowds to enjoy, we expect the show to continue to grow,” said Louis DeFrancesco, RCX CEO. “With RCX, we provide a program that gets people involved and excited. With hundreds of exhibitors on display and countless high-speed races, aerobatic stunts and interactive exhibits, RCX has something for everyone.”