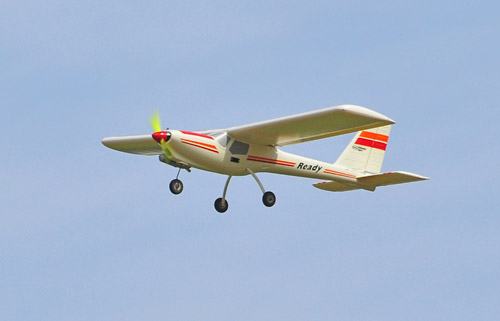 The Ready mk3 is a newly released model in Thunder Tiger’s ABS series. There are three available at this time: the Beaver, Cessna Cardinal and the Ready mk3. These ARFs are completely different from what we are used to seeing. They’re made entirely of precision-molded ABS plastic! When you think of plastic, the word “heavy” comes to mind. Not so with these ARFs. All of them fly very well with a reasonable 24-ounce wing loading and are much more robust than the conventional ARF built of balsa, ply and covering. However, they don’t have that conventional look we are used to seeing in an ARF because they are plastic.

The Ready mk3 ARF is a great choice for the entry-level pilot because of its great flight stability and tricycle landing gear. It’s easy to assemble with blow-molded wings and fuselage and comes with all the hardware, including landing gear, wheels, engine mount, spinner, fuel tank and includes a complete hardware pack and decal. The manual is a foldout sheet with numbered pictures coinciding with numbered text. I prefer a manual. Even a long screwdriver is included to facilitate mounting the landing gear. A small repair kit with epoxy is also included. All of the hardware parts like control horns, engine mount and wing servo mounting parts are molded from GFR nylon and fit exceptionally well.

There are many features on the Ready mk3 that make assembly fast. All the control surfaces are prehinged. I started with the wing by gluing the wing panels into the center section joiner with epoxy. It’s always smart to trial fit first. In this case, it’s a good idea to scuff the gluing surfaces with 100 paper so the epoxy will adhere. The fit was exceptional. After mounting the aileron control horns, I mounted the aileron servo with its components. It’s possible to mount two servos side-by-side in the well in case you want each aileron on a separate channel. I chose to keep it simple and use one servo. The aileron linkage is pre-made with a “Z” bend and threads on the other end for the plastic clevis. Don’t forget the retainer on the clevis.

The fuselage requires a little more work and you’ll need to take more time to install two bulkheads, the firewall and the main landing gear support. These bulkheads require some work before installing such as drilling holes and mounting some components. After sanding off the flashing, I drilled the four holes required to locate the firewall in the fuselage and installed the firewall locating pins with thin CA. Thunder Tiger makes it easy to drill the holes by providing dimples at hole locations that center the drill bit, allowing all to be drilled with a hand drill. I then installed the firewall through the wing opening and up against the locating pins and applied Mercury 100 XF CA to tack it in place. I mixed up some 30-minute epoxy with mico-balloons, and applied a bead around the glue joint of the bulkhead providing a fillet with a finger wetted with alcohol. I did this on the backside of the bulkhead as well. The other bulkhead was installed and glued the same way including the attached servo-mounting tray. I highly recommend doing it this way.

The tail feathers require little work other than gluing together the stab halves.  There is no left or right hand. There is one wood spar to install before the stab halves are joined, the only piece of wood, to retain the stab airfoil shape. I epoxied this in place on one half before joining them. The stab and vertical fin were installed into wide cuffs where they fit perfectly. I then applied thin Mercury M5T CA around the gluing surface to retain them. The fuselage is cut out to fit the engine, but does require some trimming around the engine carb and muffler. A hole is required in the cowl to get to the back bolt retaining the muffler. I ran the fuel line through it to keep it away from the engine heat.

There are a number of decals to apply to make the Ready mk3 stand out and some of them are quite large. Here is how I applied them. First, clean the surface thoroughly. Spray the surface with Windex and make sure it is completely wet. Pick up a corner of the decal with a hobby knife and pull it off the sheet. Place on the wetted area and slide into position. Squeegee excess fluid from the center of the decal outward with a credit card, eliminate air bubbles and blot with a paper towel. This method can be used for most any decal.

The Thunder Tiger ABS Series has a lot to offer in fast, easy construction, durability, quality and a low-cost airplane for the modeler on a low budget. Although ABS tends to crack under stress it can be easily repaired. It can also be painted with your own personal touch to separate your airplane from the rest of the clones at the flying field. Admittedly, the plastic look will take some getting used to, but in time it will normalize when we see more of it…and we will.

General flight performance: After checking the control throws and CG, the Ready mk3 was ready for the maiden voyage. The Pro .46 started easily and was run up to get the glow plug hot. I taxied out to the runway and noted the good ground handling with the trike gear, but was unstable in windy conditions. I advanced the throttle slowly down the runway to keep directional control and it lifted off at a little over 3/4 throttle after a long run. On the down wing leg I began trimming and had it set up almost perfectly to begin with. Once it was trimmed, hands off, I flew around to get the feel with checking the tracking, stalls and other flight characteristics as well as how slow it would fly. On t
he last down wind leg, I set up for the landing heading for the base and then the final, checking out the glide, which was good. Viewing a little of the top of the wing and stab with the airplane coming toward you lets you know the airplane is descending and not maintaining level flight. Once in ground effect, I stretched the glide and found that I had to add power to do it. The subsequent landings were committed with a higher idle which proved better.

Tracking: The airplane does very well at half throttle; a calming effect on the new pilot. There was little adverse yaw in the turns, but with some rudder input, this was taken out. Remember to use your left thumb.

Aerobatics: The Ready mk3 is not an aerobatic wonder but will perform basic aerobatic maneuvers quite well such as a loop, stall turn, barrel roll and Cuban-8; with the extra power of the Pro .46, it is even better.

Glide and Stall Performance: Stalls were on the mushy side with no break to either side. Pulling it up to a higher angle of attack would cause a cleaner break allowing for power up and easy fly out. This airplane is not a floater, however is very stable and predictable through all flight phases. It has great performance for the new pilot.

Pilot Debriefing: The Thunder Tiger Ready mk3 is a great entry-level trainer that introduces the pilot to a very stable airplane with the use of ailerons after some time on a simulator. It’s very durable and will take more punishment and abuse than other trainers on the market. With its low cost, quality workmanship, great flight characteristics, fast assembly at the field and easy transportation, the Ready mk3 is certainly one to consider.  It’s a terrific, everyday airplane and one you will enjoy flying.

All Thunder Tiger engines have been designed to combine high performance with easy handling and maintenance using CAD computer technology, resulting in consistent high quality and reliability. The PRO series engines are equipped with dual ball bearings, Schnuerle porting, a special ABN-type piston and cylinder sleeve, and automatic mixture control carburetors with safe angular needle valve. The PRO series engines do not require a prolonged break-in period and after a short run, can be flown for additional break-in. Flown extensively in the Ready mk3 review, the PRO .46 performance was exceptional. Thunder Tiger engines have been designed to accommodate beginners and experts alike becoming very popular with the modelers. 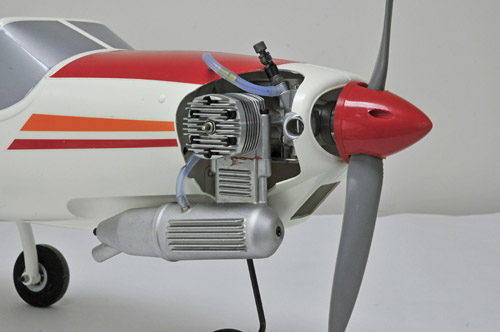 The engine opening is pre-cut for the Thunder Tiger Pro .46. Note the fuselage is relieved for the muffler. Some trimming was required around the carburetor for a good fit. 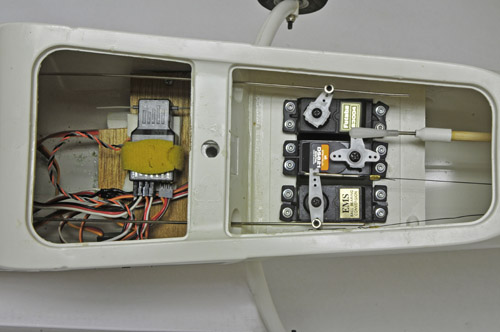 The battery was wrapped in foam and mounted under the receiver against the bulkhead to achieve the correct CG. Note the bolthole in the bulkhead.  One bolt with a large head holds the wing to the fuselage with no problem! 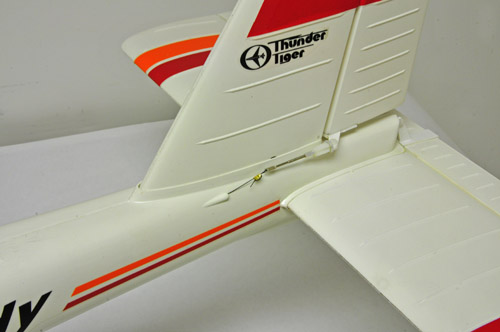 Pull-pull is used on the rudder while the elevator pushrod comes straight out the back of the fuselage. 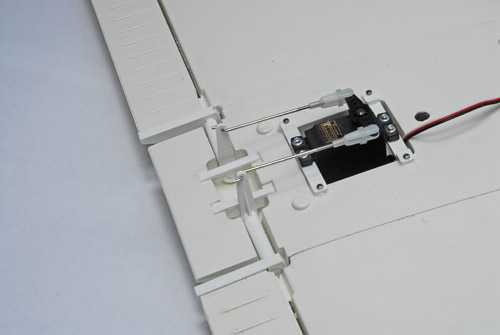 I mounted the aileron servo with its components. It is possible to mount two servos side-by-side in the well in case you want each aileron on a separate channel. 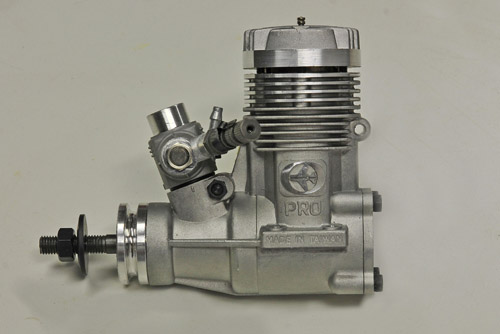 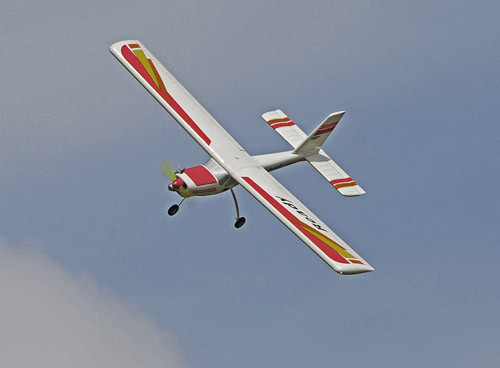 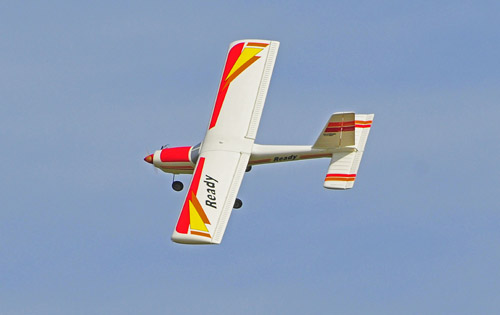